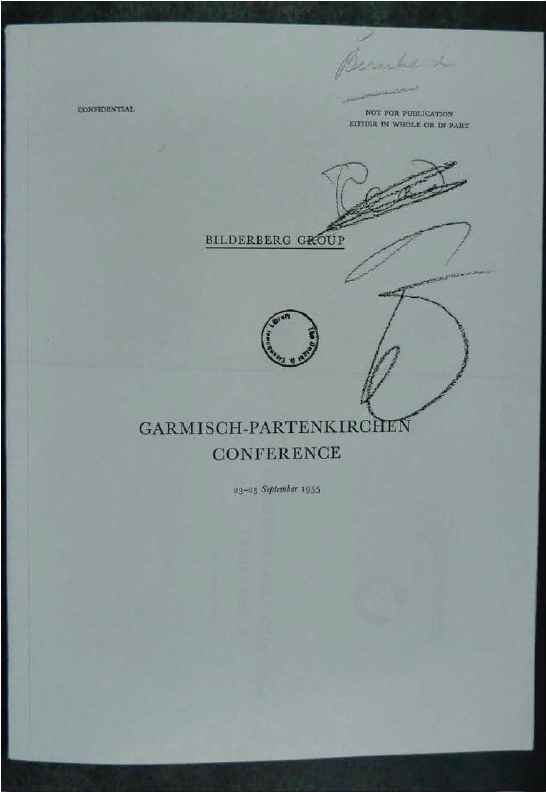 The third Bilderberg Conference was held at Garmisch-Partenkirchen in Germany from 23 to 25 September, 1955, under the chairmanship of H.R. H. Prince Of the Netherlands.

It will be recalled that previous conferences of the same kind were held at Bilderberg in Holland in May. 1954, and at Barbizon in France in March, 1955. The purpose of this series of conferences is to reach the highest possible denominator of mutual understanding between the countries of Western Europe and North America and so to work for the removal of causes of friction, to study those fields where action may be necessary to prevent friction from arising in the future and to examine the general areas in which agreement mav be sought. To this end it was thought desirable to bring together a group of men experience, outstanding qualities and influence from different countries of the Western world in an atmosphere of mutual confidence and personal friendship which would admit of free and frank discussion. It is not the purpose of the Bilderberg series of conferences to construct policy. Participants include statesmen and diplomatists; trades unionists; intellectuals, business and professional men. They speak as individuals and not as representatives of their respective countries Or the political parties, associations, or organizations to which they may belong. All, however, share a high purpose and a clear recognition of the urgency of the situation.

It was a conclusion of the first Bilderberg Conference that for historical reasons, together with many factors which were the ingredients of the present political, economic, and social situation, there would always be differences of opinion between the countries of Western Europe and those of North America, and in fact between any two countries in the world. Divergencies of view are not in themselves deplorable, and indeed, they are the quintessence of democratic life.  Nevertheless, it is a matter or the utmost urgency that the will and the means should exist for finding a common basis on which to build our future.

At the second conference, held in Barbizon this year, subjects were chosen for the agenda which were bound to be controversial to a certain extent, but the discussion of which could clarify the situation, and in some cases could be followed up in the future. The problem of the unconnected peoples was discussed and the general question of communist infiltration and propaganda, together with the approach of the Western European and North American countries to this question. It was felt that there must grow not only a better understanding between the countries of the Western alliance but a closer contact and better understanding with the Asian and African countries, to many of which belong the so-called uncommitted peoples of the world.  There was a strong current of option also that there might be great value in arranging a subsequent meeting between leaders of the mind and spirit of the East and West in an atmosphere similar to that of the Bilderberg series of conferences.

It was also generally agreed that too little was being done to counteract the unceasing and insidious encroachment of communist propaganda.  The participants agreed that wherever they had found general agreement at the two previous meetings, by making whatever use might be possible of the press and other contacts with public opinion.  It is believed also that in the wide and important field presented by the European-American Associations much could be done towards creating the friendly atmosphere needed for the growth of the highest degree of co-operation.

It will be seen from the list of participants that the Garmisch Conference was attended b men from thirteen different countries.  The subjects discussed were:

I. Review of events since the Barbizon Conference

III. The political and strategic aspects of atomic energy.

IV. The reunification of Germany.

(b) The political aspects of convertability

In order to allow participants to speak with perfect frankness and in the knowledge that their words would not be read outside the conference circle, the Chairman asked for the utmost discretion.  The press, as at the previous conferences, was not admitted, and this document should be treated strictly confidential and for the personal use of the recipient only.

A press statement, released at Garmisch-Partenkirchen on 26 September, 1955, is reproduced in the Appendix to this report.