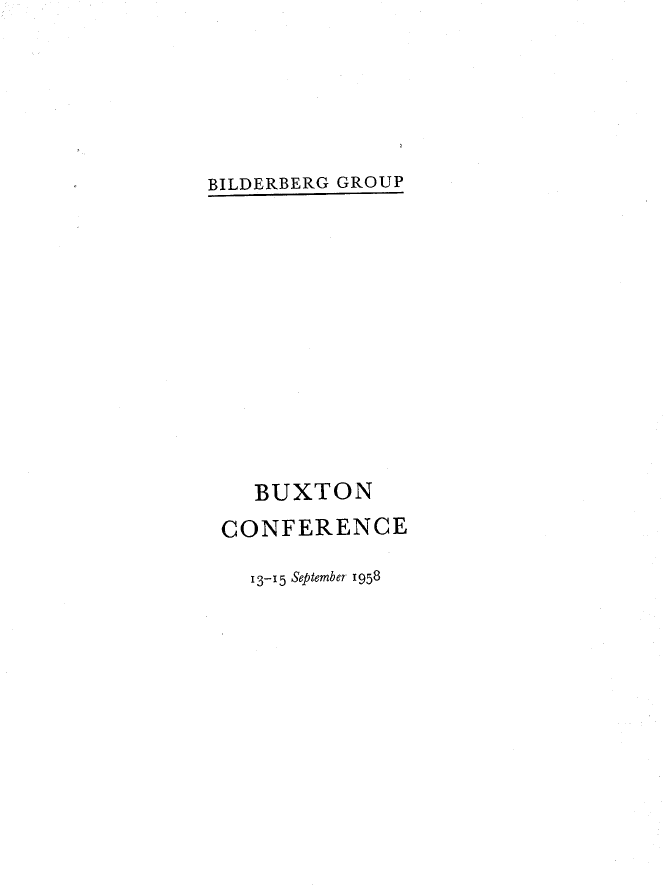 The Buxton Conference was the seventh of its kind, the previous ones having been held in various European countries and in the United States.

It is not the purpose of these conferences to attempt to make policy or to recommend action by governments. Their sole object is, by bringing together men of outstanding qualities and influence, in circumstances where discussions can be frank and where arguments not always used in public debate can be put forward, to reach a better understanding of prevailing differences between the Western countries and to study those fields in which argument may be sought.

The discussions are so organized as to permit a broad and frank exchange of views to take place. They are held in conditions of strict privacy and neither the press nor observers are admitted. No resolutions are passed and no statements have to be approved by the participants, who are free to draw their own conclusions.

Those invited to attend the Bilderberg Conferences are chosen from different nations and from all fields of public activity and include statesmen, diplomatists, business and professional men, intellectuals, and leaders of public opinion. All participants attend the meetings in a purely personal capacity and the views they express do not necessarily represent those of the organizations or Parties to which they belong. The various topics on the agenda are introduced by rapporteurs who have prepared papers on these subjects. These documents are as flu as possible circulated in advance of the meetings.

In the following text the views expressed during the debates are briefly summarized under headings which correspond to the different points of the agenda.

I. SURVEY OF EVENTS SINCE THE LAST BILDERBERG CONFERENCE IN FIUGGI

II. THE FUTURE OF N.A.T.O. DEFENCE

IV. THE WESTERN APPROACH TO SOVIET RUSSIA AND COMMUNISM

TACTICS IN THE COLD WAR

PROBLEMS OF THE COMMON MARKET