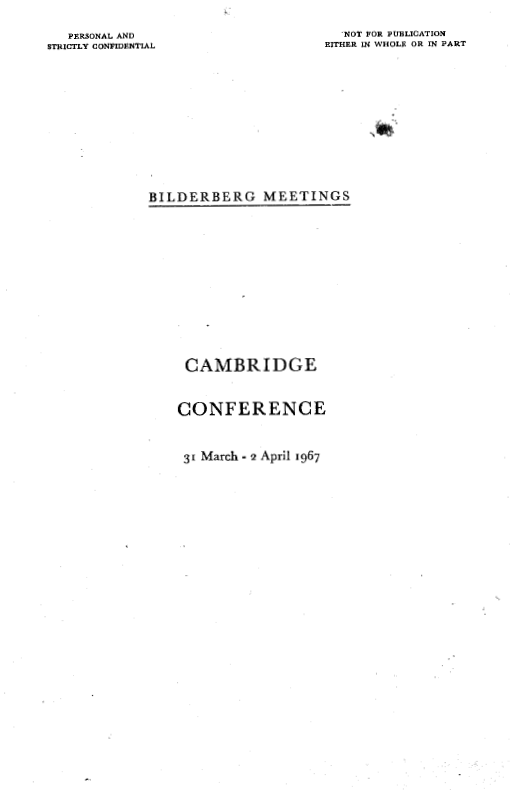 The sixteenth Bilderberg Meeting was held at St. John’s College in Cambridge (England) on 31 March, l and 2 April 1967 under the chairmanship of H.R.H. The Prince of the Netherlands.

There were 88 participants from the United States, Canada and fifteen Western European countries as well as from various international organizations. They consisted of members of governments, leading civil servants and prominent businessmen, representatives of employers’ organizations and trade unions and important persons in other fields.

In accordance with the rules adopted at each meeting, all participants spoke in a purely personal capacity without in any way committing whatever government or organization they might belong to. In order to enable participants to speak with the greatest possible frankness, the discussions were confidential with no representatives of the press being admitted.

I. a) Do the basic concepts of Atlantic co-operation remain valid for the evolving world situation?

b) If not, what concepts could take their place?

II. The technological gap between America and Europe with special reference to American investments in Europe.

On opening the meeting, His Royal Highness The Prince of the Netherlands asked participants to observe one minute silence in tribute to Mr. Fritz Erler, a greatly valued collaborator of Bilderberg and member of the Steering Committee, who had passed away in the beginning of this year.

His Royal Highness then read a message he had sent to Her Majesty Queen Elizabeth.

The Prince informed participants that, for practical reasons, the order of the Agenda had been changed. He, consequently, proposed to start the discussion on the second item.