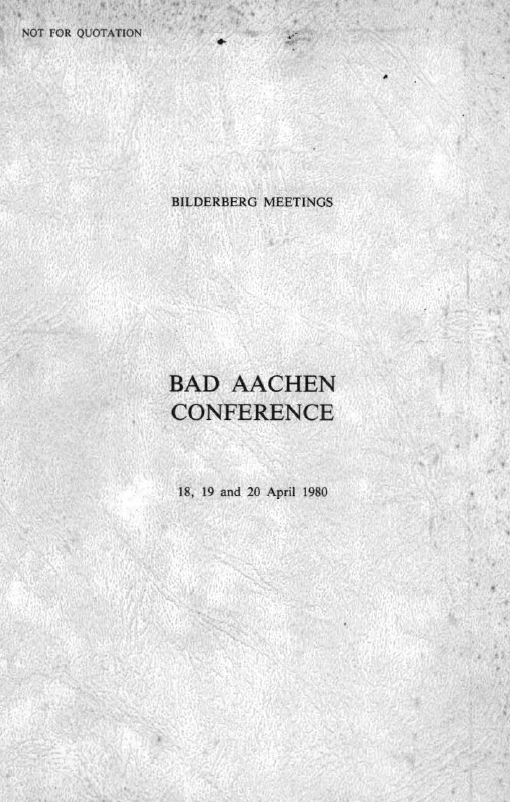 The twenty-eighth Bilderberg Meeting was held at tht. Parkhotel Quellenhof, Bad Aachen, Federal Republic of Germany, on 18, 19 and 20 April 1980 under the chairmanship of Lord Home of the Hirsel, K.T.

There were 113 participants, drawn from a number of fields: government and politics, diplomacy, industry, trade unions, transport, banking, the law, journalism, education, and institutes specialized in national and international affairs. They came from 18 Western European countries, the United States, Canada and various international organizations.

In accordance with the rule adopted at each Meeting, all participants spoke in a purely personal capacity, without in any way committing the government or organization to which they belonged. To enable participants to speak frankly, the discussions were confidential with no reporters being admitted.

In opening the meeting, the Chairman, Lord Home, read the text of a telegram of good wishes which he had sent to the President of the Federal Republic of Germany on behalf of all the Bilderberg participants.

America and Europe: Past, Present and Future

To give some order to the consideration of this broad topic, the discussion was organized to deal successively with the political, security and economic aspects, and the various working papers were concerned with one or another of those aspects.

Some subjects necessarily involved two or three of those major aspects. The crisis in Iran, for example, had important political, security and economic implications, but for the sake of continuity most of the remarks on Iran have been included in the “political” section.

In the same way, it might happen that a single intervention would deal with the whole range of topics encompassed by the agenda, as where the speaker was not able to attend all the sessions of the conference. Such an intervention has not been reported integrally; its components have been summarized under each of the various topics.