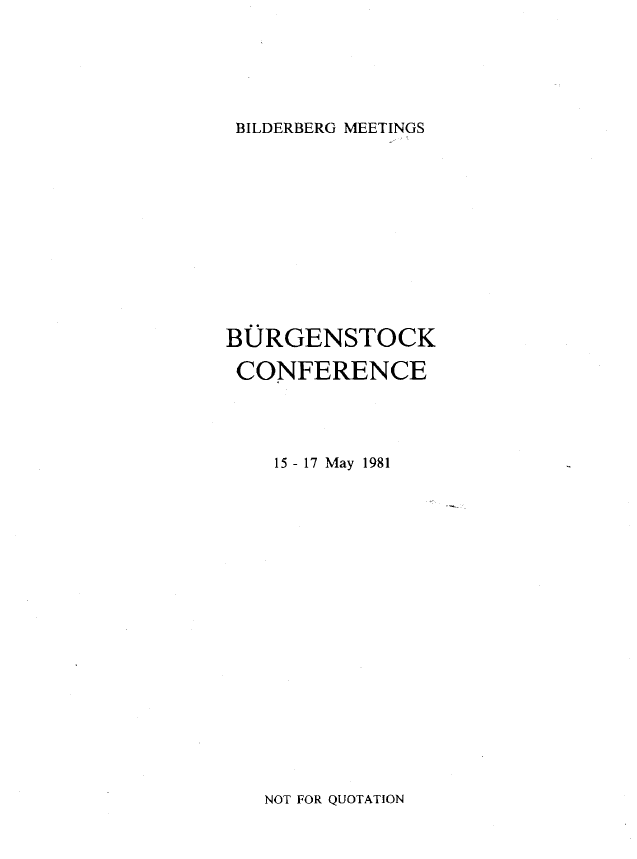 The twenty-ninth Bilderberg Meeting was held at the Palace Hotel, Bürgenstock, Switzerland, on 15, 16 and 17 May 1981 under the chairmanship of Mr. Walter Scheel.

There were 98 participants, drawn from a variety of fields: government and politics, banking, industry, diplomacy, the armed services, journalism, trade unions, transport, education, and institutes specialized in national and international affairs. They came from 18 Western European countries, Canada, the United States, and various international organizations.

All participants spoke in a personal capacity, without in any way committing the organization or government to which they belonged. To allow participants to speak frankly, the discussions were confidential with no reporters being admitted. At the opening of the meeting, the Chairman read the text of a telegram of good wishes which he had sent to the Swiss Federal Council. During the conference, the Council was the host at a gala dinner presided over by Mr. Kurt Furgler, President of the Swiss Confederation.

The agenda was a follows:

I. What Should Western Policy Be Toward the Soviet Union in the 1980’s?
II. Obstacles to Effective Coordination of Western Policies
III. How Can the Western Economies Put Their House in Order?

In addition, one morning was devoted to a panel discussion-of international economic issues and another to current events.