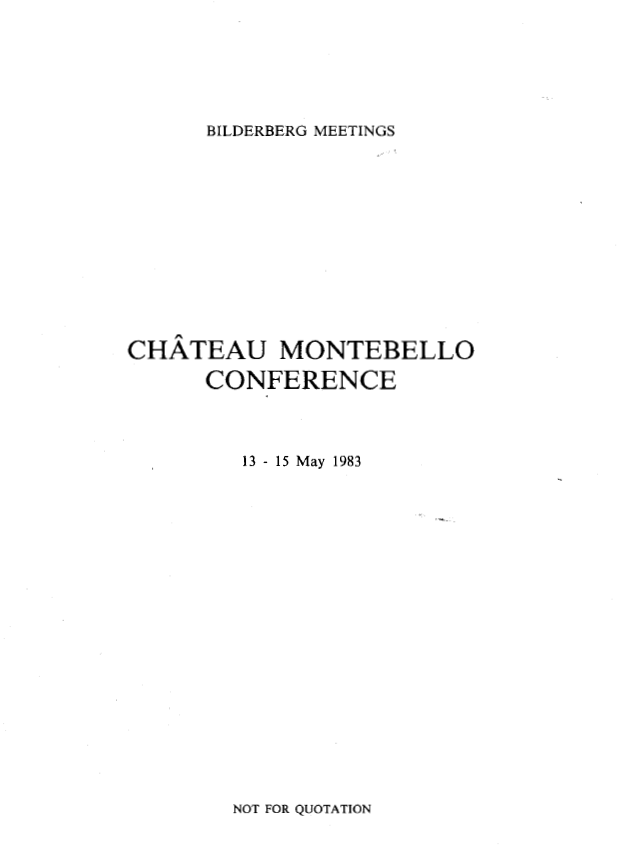 The thirty-first Bilderberg Meeting was held at the Chateau Montebello, Province of Quebec, Canada, on May 13, 14 and 15, 1983, under the chairmanship of Mr. Walter Scheel.

There were 112 participants from 18 Western European countries, the United States, Canada, and several international organizations. They represented a variety of fields: government and politics, industry, trade unions, diplomacy, the press, the military services, banking, the law, transportation, education, and institutes specialized in national and international studies.

All participants spoke in a personal capacity, without in any way committing the organization or government to which they belonged. To enable participants to speak frankly, the discussions were confidential, with no reporting being allowed.

II. Issues in Medium-Term Prospects for Growth in the World Economy

In addition to this formal agenda, there was a discussion at the final session of
current events of particular importance to the Atlantic alliance.

In opening the conference, the Chairman alluded to several subjects with which the participating countries had been concerned during the preceding year, including the long-anticipated change in the leadership of the Soviet Union, the continuing arms race, the Madrid conference on the Helsinki accords, and the worsening plight of the poor countries.

All of these matters touched directly on the problem of maintaining peace in the world. The fact that there had been no war in Europe since 1945 suggested that our policy there, under the leadership of the U.S., had been the right one. Over the years, Europe had regained its strength and self-confidence, and this had raised the problem of how best to coordinate joint action. An ideal partnership was hard to achieve – not so much because of faulty communication, which was easily remedied, but because of a frequent lack of transatlantic understanding. Americans and Europeans labored under prefabricated notions about one another, and about themselves, and the Bilderberg Meetings had for many years served the useful purpose of providing detailed information and insight into interests and motivations, priorities and assessments, on both sides of the Atlantic.