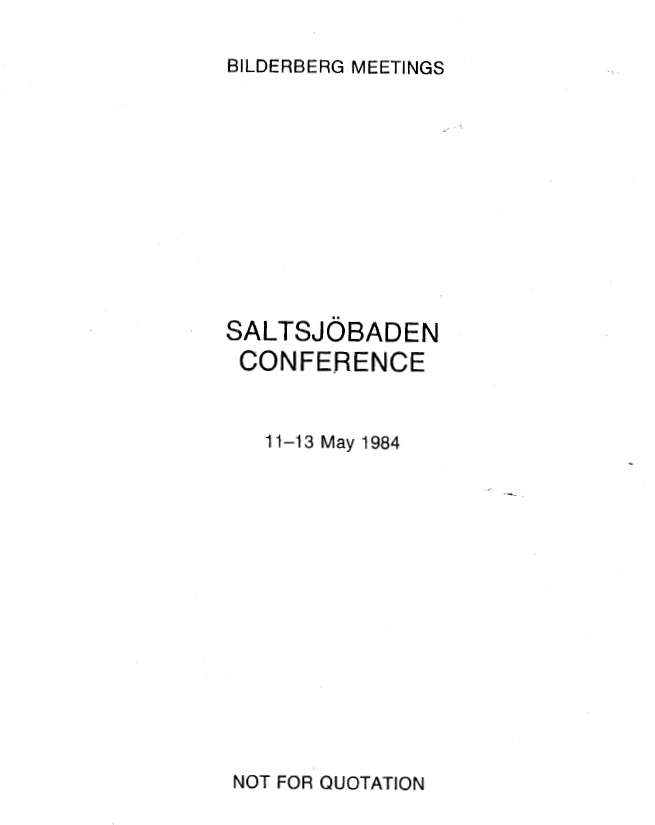 The thirty-second Bilderberg Meeting was held at the Grand Hotel, Saltsjöbaden, Sweden, on May 11, 12 and 13, 1984, under the chairmanship of Mr. Walter Scheel.

There were 116 participants from 19 Western European countries, the United States, Canada, and several international organizations. They represented a variety of fields: government and politics, industry, trade unions, diplomacy, the press, the military services, banking, the law, transportation, education, and institutes specialized in national and international studies.

All participants spoke in a personal capacity, without in any way committing the organization or government to which they belonged’. To enable participants to speak frankly, the discussions were confidential, with no reporting being allowed.

Western Power and the Middle East:

A Case Study in Atlantic Relationships

IV. The Soviet Union, the West and the Third World – A Case Study: Central America

In addition to this formal agenda, there was a session devoted to a discussion of current events, concentrating on the topic “Continental Drift: Economic and Political.”

In opening the conference, the Chairman expressed, on behalf of all the participants, their special gratitude for the presence of their majesties King Carl XVI Gustaf of Sweden and Queen Beatrix of the Netherlands, of their Royal Highnesses Crown Prince Harald and Prince Claus, and of Prime Minister Palme. The Chairman noted that the Grand Hotel, Saltsj6baden, had been the setting for three Bilderberg conferences, more than any other place, and that the meeting hall of the present conference had been named in honor of the late Marcus Wallenberg, who for many years had been an interested and active member of the Bilderberg Steering Committee.

The Chairman-went on to say that, in today’s sharply polarized world, we needed understanding among the members of the free world, particularly between the free part of Europe and North America. For many reasons, there was a marked tendency among Europeans to seek friendship with their North American partners. Western Europeans attached great value to that understanding and were sensitive to developments across the Atlantic. A glance at the newspapers or television programs on either side of the Atlantic would illustrate that sensitivity.

Europeans were paying increased attention to the relationships of the U.S. with countries of the Pacific basin. Some Europeans likened U.S.-Atlantic and U.S.-Pacific relationships to a hyperbola in a coordinate system, and were concerned-not for economic reasons alone-about a movement along the hyperbola toward the Pacific. Indeed, the fast-growing economies of the Pacific had overtaken Western Europe about four years ago as the main trading partner of the U.S.

The Chairman felt that the shape of future developments, both economic and political, would depend primarily on Europe. He was also convinced that, given the political competition between the differing social systems in East and West, there was no alternative to the firmly-established partnership between North America and Western Europe.