Bilderberg Discussion Paper: What is Happening to Detente? Relations Between the West and the Communist Countries 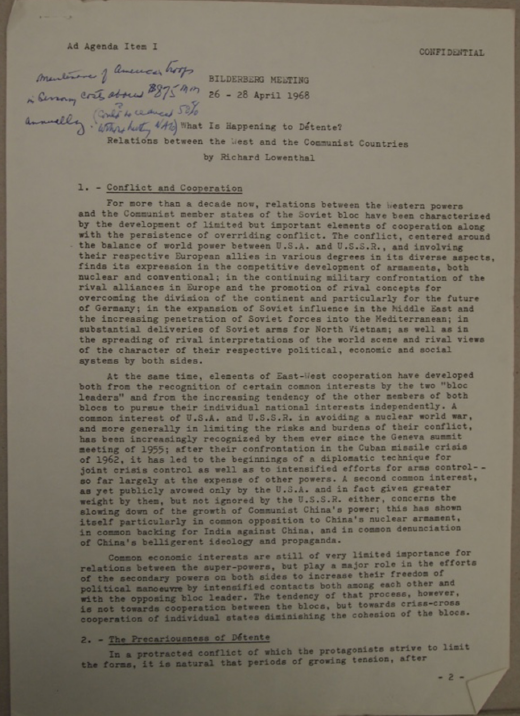 What Is Happening to Detente? Relations Between the West and the Communist Countries by Richard Lowenthal

For more than a decade now, relations between the Western powers and the Communist member states of the Soviet bloc have been characterized by the development of limited but important elements of cooperation along with the persistence of overriding conflict. The conflict, centered around the balance of world power between U.S.A. and U.S.S.R., and involving their respective European allies degrees in its diverse aspects, finds its expression in the competitive development of armaments, both nuclear and conventional; in the continuing military confrontation of the rival alliances in Europe and the promotion of rival concepts for the division of the continent and particularly for the future of Germany; in the expansion or Soviet influence in the Middle East and the increasing penetration of Soviet forces into the Mediterranean; in substantial deliveries of Soviet arms for North Vietnam; as well as in the spreading of rival interpretations of the world scene and rival views of the character of their respective political, economic and social systems by both sides.

At the same time, elements of East—West cooperation have developed both from the recognition of certain common interests by the two “bloc leaders” and from the increasing tendency of the other members of both blocs to pursue their individual national interests independently. A common interest of U.S.A. and U.S.S.R. in avoiding a nuclear world war, and more generally in limiting the risks and burdens of their conflict, has been increasingly recognized by them ever since the Geneva summit meeting of 1955; after their confrontation in the Cuban missile crisis of 1962, it has led to the beginnings of a diplomatic technique for joint crisis control as well as to intensified efforts for arms control – so far largely at the expense of other powers. A second common interest,
as yet publicly avoided only by the U.S.A. and in fact given greater weight by them, but not ignored by the U.S.S.R. either, concerns the slowing don or the growth of Communist China’s power; this has shown itself particularly in common opposition to China’s nuclear armament, in common backing for India against China. and in common denunciation of China’s belligerent ideology and propaganda.