Bilderberg Discussion Paper: Sources of Instability in the United States 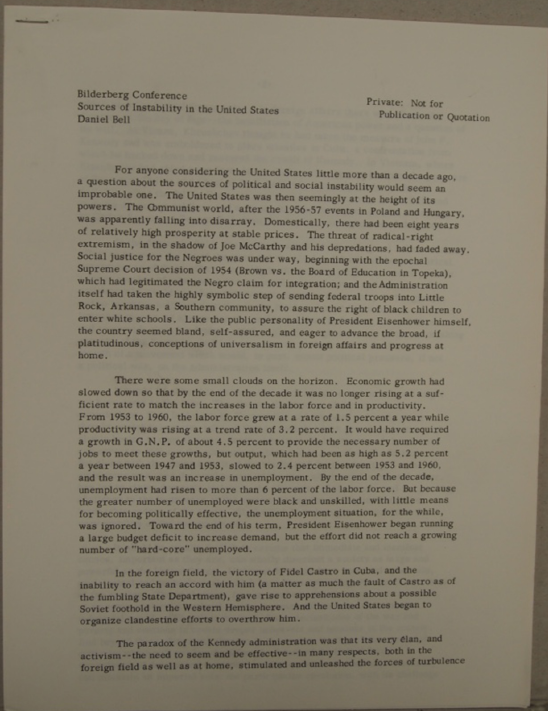 Sources of Instability in the United States by Daniel Bell

For anyone considering the United States little more than a decade ago, a question about the sources of political and social instability would seem an improbable one. The United States was then seemingly at the height of its powers. The Communist world, after the 1956-57 events in Poland and Hungary, was apparently falling into disarray. Domestically, there had been eight years of relatively high prosperity at stable prices. The threat of radical-right extremism, in the shadow of Joe McCarthy and his depredations, had faded away. Social justice for the Negroes was under way, beginning with the epochal Supreme Court decision of 1954 (Brown vs. the Board of Education in Topeka), which had legitimated the Negro claim for integration; and the Administration itself had taken the highly symbolic step of sending federal troops into Little Rock, Arkansas, a Southern community, to assure the right of black children to enter white schools. Like the public personality of President Eisenhower himself, the country seemed bland, self-assured, and eager to advance broad, if platitudinous, conceptions of universalism in foreign affairs and progress at home.

There were some small clouds on the horizon. Economic growth had slowed down so that by the end of the decade it was no longer rising at a sufficient rate to match the increases in the labor force and in productivity. From 1953 to 1960, the labor force grew at a rate of 1.5 percent a year while productivity was rising at a trend rate of 3.2 percent. It would have required a growth in G.N.P. of about 4.5 percent to provide the necessary number of jobs to meet these growths, but output, which had been as high as 5.2 percent a year between 1947 and 1953, slowed to 2.4 percent between 1953 and 1960, and the result was an increase in unemployment. By the end of the decade, unemployment had risen to more than 6 percent of the labor force. But because the greater number of unemployed were black and unskilled, with little means for becoming politically effective, the unemployment situation, for the while, was ignored. Toward the end of his term, President Eisenhower began running a large budget deficit to increase demand, but the effort did not reach a growing number of “hard-core” unemployed.