Bilderberg Discussion Paper: Some Reflections on the Japanese at Aspen 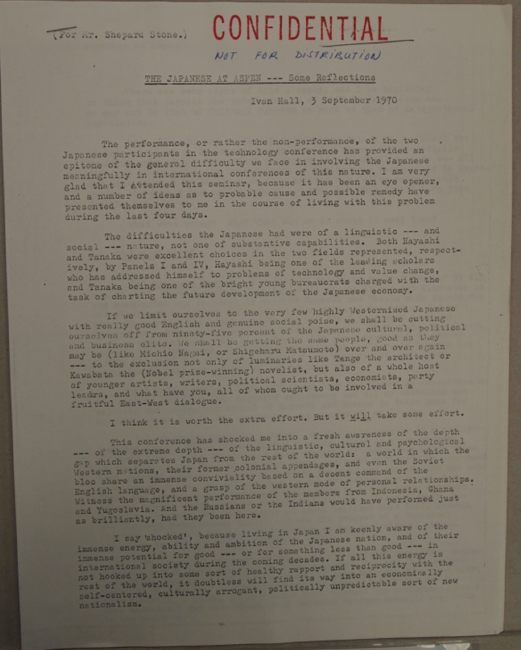 The Japanese at Aspen - Some Refelections by Ivan Hall

The performance, or rather the non-performance, of the two Japanese participants in the technology conference has provided an epitome of the general difficulty we face in involving the Japanese meaningfully in international conferences of this nature. I am very glad that I extended this seminar, because it has been an eye opener, and a number of ideas as to probable cause and possible remedy have presented themselves to me in the course of living with this problem during the last four days.

The difficulties the Japanese had were of a linguistic — and social — nature, not one of substantive capabilities. Both Hayashi and Tanaka were excellent choices in the two fields represented, respectively, by Panels I and IV, Hayashi being one of the leading scholars who has addressed himself to problems of technology and value change, and Tanaka being one of the bright your bureaucrats charged with the task of charting the future development of the Japanese economy.

If we limit ourselves to the very few highly Westernized Japanese with really good English and genuine social poise, we shall be cutting ourselves off from the ninety-five percent of the Japanese cultural, political and business elite. We shall be getting the same people, good as they may be (like Michio Nagai, or Shigeharu Matsumoto) over and over again — to the exclusion not only of luminaries like Tanga the architect or Kawabata the (Nobel prize-winning) novelist, but also of a whole host of younger artists, writers, political scientists, economists, party leaders, and what have you, all of whom ought to be involved in a fruitful East-West dialogue.