Remarks of James Perkins and Bill Moyers at 1968 Bilderberg Coference 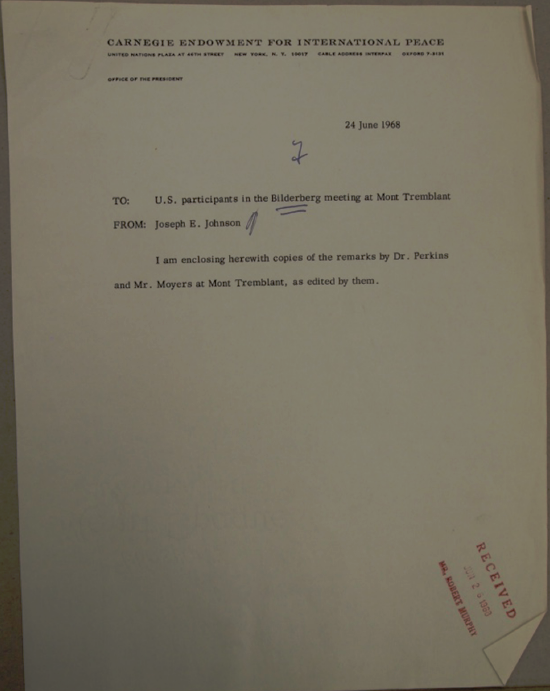 I assume I was asked to do this because of my years of close association with the President. However, I must admit that I do not have any special intelligence. Mr. Ball and Mr. McNamara have been closer in the last year to the President than I have and what I am about to say is really my opinion based upon my years with the President and the deduction of certain evidence that I have seen in print and heard from friends.

I am not, of course, without prejudice. You cannot work as closely as I did with a man and not feel some sense of pride in his finer moments. I must also say that Mr. Johnson is one of the more inscrutable men I have known and it would be only a fool’s effort to try to say that this or that reason was a more weighted factor in the confluence of rivers of influence at which he made up his mind.

There was no single issue; there were several: personal, political and patriotic.

At the personal level have no doubt that the five years Mr Johnson has spent in the White House have taken their toll. His health was and is good, but he is obviously a weary man. You can run the hundred yards dash once a week or once a month for years and not reel the result but you cannot run the hundred
yards dash once or twice a day without feeling the results. And every start is a little slower. Mr. Johnson was a weary man.