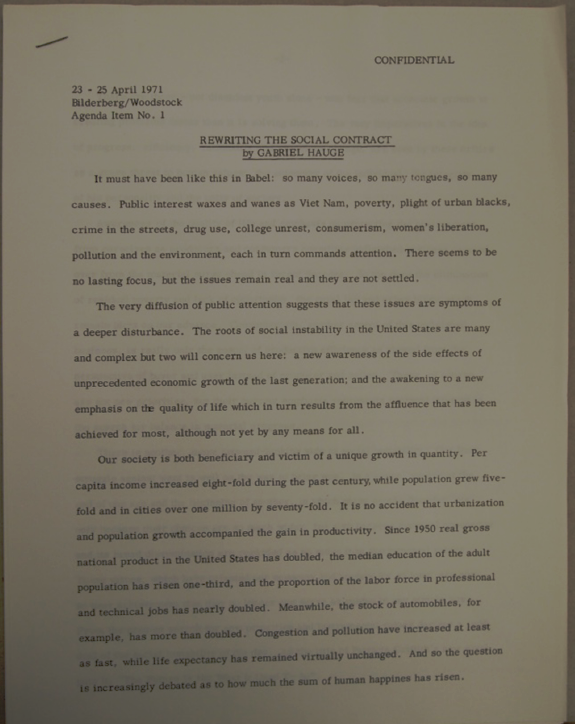 It must have been like this in Babel: so many voices, so many tongues, so many causes. Public interest waxes and wanes as Viet Nam, poverty, plight of urban blacks, crime in the streets, drug use, college unrest, consumerism, women’s liberation, pollution and the environment, each in turn commands attention. There seems to be no lasting focus, the issues remain real and they are not settled.

The very diffusion of public attention suggests that these issues are symptoms of a deeper disturbance. The roots of social instability in the United States are many and complex but two will concern us here: a new awareness of the side effects of unprecedented economic growth of the last generation; and the awakening to a new emphasis on quality of life which in turn results from the affluence that has been achieved for most, although not yet by any means for all.

Our society is both beneficiary and victim of a unique growth in quantity. Per capita income increased eight-fold during the past century, while population grew fivefold and in cities over one million by seventy-fold. It is no accident that urbanization and population growth accompanied the gain in productivity. Since 1950 real gross national product in the United States has doubled, the median education of the adult population has risen one-third, and the proportion of the labor force in professional and technical jobs has nearly doubled. Meanwhile, the stock of automobiles, for example, has more than doubled. Congestion and pollution have increased at least as fast, while life expectancy has remained virtually unchanged. And so the question is increasingly debated as to how much the sum of human happiness has risen.