Bilderberg Discussion Paper: Some Implications of the World Company 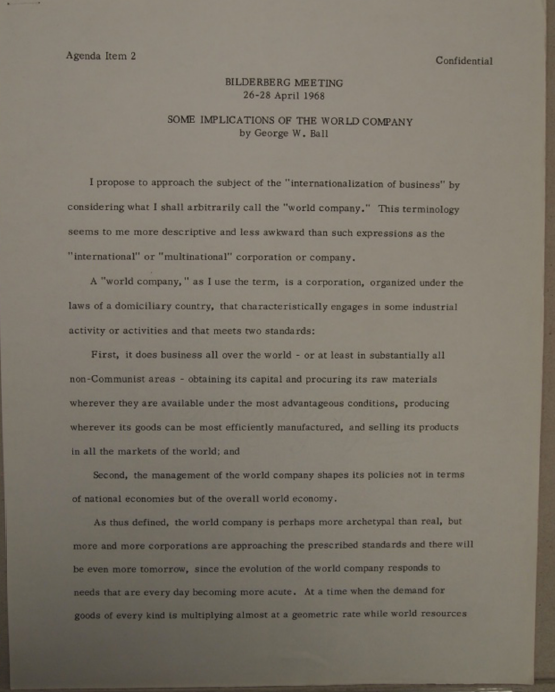 Some Implications of the World Company by George W. Ball

I propose to approach the subject of the “internationalization of business” by considering what I shall arbitrarily call the “world company.” This terminology seems to me more descriptive and less awkward than such expressions as the “international” or “multinational” corporation or company.

A “world company, ” as I use the term, is a corporation, organized under the laws of a domiciliary country, that characteristically engages in some industrial activity or activities and that meets two standards:

First, it does business all over the world – or at least in substantially all non-Communist areas – obtaining its capital and procuring its raw materials wherever they are available under the most advantageous conditions, producing wherever its goods can be most efficiently manufactured, and selling its products in all the markets of the world; and

Second, the management of the world company shapes its policies not in terms of national economies but of the overall world economy. As thus defined. the world company is perhaps more archetypal than real, but more and more corporations are approaching the prescribed standards and there will be even more tomorrow, since the evolution of the world company responds to needs that are every day becoming more acute. At a time when the demand for goods of every kind ts multiplying almost at a geometric rate while world resources remain finite, we must find the means to use those resources with a maximum of efficiency and a minimum of waste or face a Malthusian debate on a global scale. It is to this end that the world company makes its unique contribution, by enabling
men for the first time in history to deploy resources freely throughout the world in accordance with principles of comparative advantage measured by the objective standard of profit.