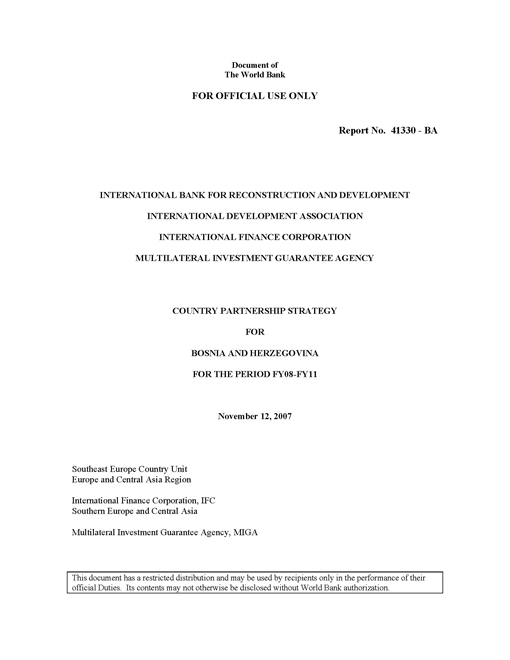 1. Bosnia and Herzegovina (BH) has made remarkable progress in post-conflict reconstruction, social integration and state building since the end of the 1992-95 war. The Dayton Peace Agreement, signed in 1995, established a complex governance structure comprising the Council of Ministers at the State-level government and two Entity Governments: the Federation of Bosnia and Herzegovina (the Federation) and Republika Srpska (the RS). An autonomous Brcko District was added to the structure in 1999.

2. With the continued support of the international community, the country has taken strides towards establishing a functioning market economy and making progress towards EU integration. The BH economy is stable. Growth has averaged five percent a year since 2000 while inflation has remained below five percent for most of the decade. Although the most recent data is scarce, there is
some evidence of poverty reduction, though rural areas may be lagging. Negotiations with the
European Union (EU) on a Stabilization and Association Agreement (SAA) were opened in
November 2005. Technical negotiations were completed, but the SAA has not yet been signed –
mainly due to an impasse on police restructuring.

3. The World Bank Group has played a significant role in this development story with
commitments totaling more than $1.1 billion IDA credits and grants since 1996 and nearly $250
million original commitments from the International Finance Corporation (IFC) and about $310
million in guarantees from MIGA. This constituted one of the largest per capita assistance programs
received by any post-conflict country. The vast bulk of this support came in the reconstruction phase.
A review carried out by the Independent Evaluation Group (IEG) in 2004 found the BH
reconstruction program to be an example of “the Bank at its best”.

4. In spite of the very substantial progress in physical reconstruction, more than a decade in
transition reforms has been lost to the war and reconstruction efforts. The complex institutional and
political environment allows for concerted political obstruction of many reforms and frequent
political gridlocks, which in turn have impeded rapid advances on economic reform. This has
retarded the development of a nationwide institutional infrastructure fully supportive of a market
economy and EU integration.

5. At the time of the previous Country Assistance Strategy (CAS) – endorsed by the Board in
September 2004 – the World Bank Group and other donors felt considerable optimism that BH was
on the threshold of a swift and significant transition from a reconstruction mode to a fully-fledged
development partnership one: a national medium-term development strategy (MTDS) had been
agreed; discussions with the EU on further integration had begun; and, there was some momentum in
the privatization process. Hence, the CAS was centered on Development Policy Lending (DPL)1 in
support of public sector reform and private sector development. While some important reforms were
achieved during the previous CAS period, with hindsight, it is clear that the degree of optimism felt at
the time was unwarranted. There is now a broad consensus that the key reason for poor
implementation of DPL was the lack of political commitment to reform. However, this was also
compounded by the fact that some World Bank-supported programs were overly complex and
ambitious.

6. This Country Partnership Strategy (CPS) aims to focus on areas of demonstrable
Government commitment and capacity to deliver on development strategies and reforms.
Identifying areas of intervention that have unconditional ownership by all the Governments and
which also have significant development impact has been, and will continue to be, the key
challenge. The Bank’s portfolio will mostly comprise of investment lending and, provided there is
political commitment in a particular area, very focused DPLs.

7. A range of interventions from across the World Bank Group will be used in partnership
with other donors and with communications to create an enabling environment for further reform.
IFC will seek opportunities to offer debt and equity in support of BH automotive, metals, financial
and tourism sectors, while also supporting SME development and providing advisory services;
MIGA will be open to support foreign direct investment in BH through the provision of political
risk guarantees.

8. On the World Bank side, resources under the base case of this CPS are programmed to
comprise of a mix of IDA and IBRD financing. BH will begin to use IBRD finance during the first
year of the CPS. It is anticipated that the country will graduate from IDA resources at the end of
this CPS period. Project finance will be blended and a total of approximately US$50 million a year
will be available. Should progress be made towards the high case performance benchmarks, an
incremental US$20 million per annum would be available to BH. A mid-term assessment of the
high case performance benchmarks will be undertaken in late 2009.

9. Despite strong economic performance and a reasonably healthy portfolio, the level of risk
in the BH program is substantial. The greatest internal risk to implementation of the BH program
is political obstruction of economic reforms and a deterioration in the quality of the political
dialogue. Meanwhile, local and regional political tensions risk distracting policy makers from the
economic reform program.

10. Executive Directors may wish to consider:

i) Whether the lessons learned from the previous CAS period have been adequately
reflected in the CPS;

ii) Whether the financial resources, terms and performance benchmarks are appropriately
matched to BH’s level of development;

iii) Whether the program is adequately tailored to make the best use of World Bank Group
resources in order to respond to BH’s needs. 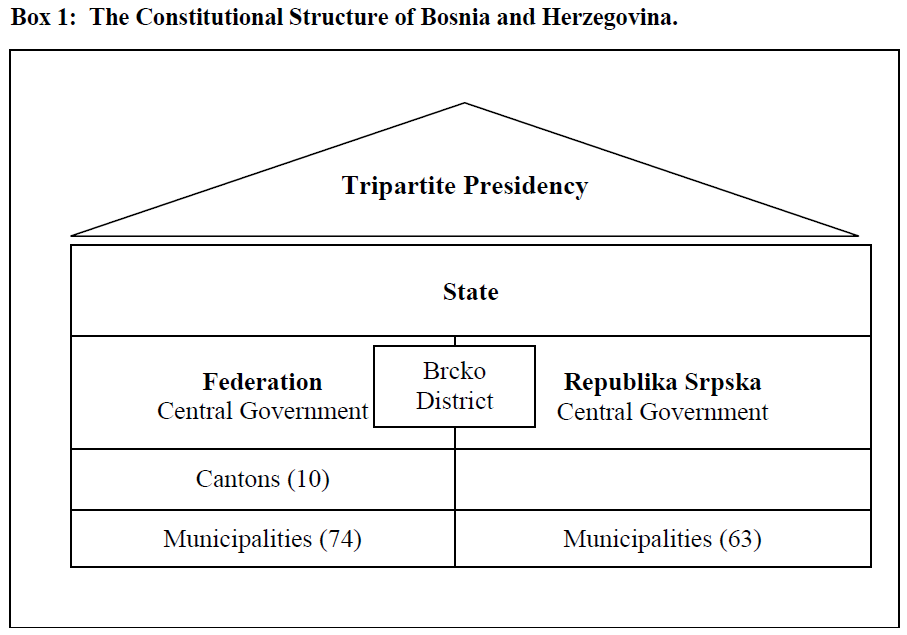 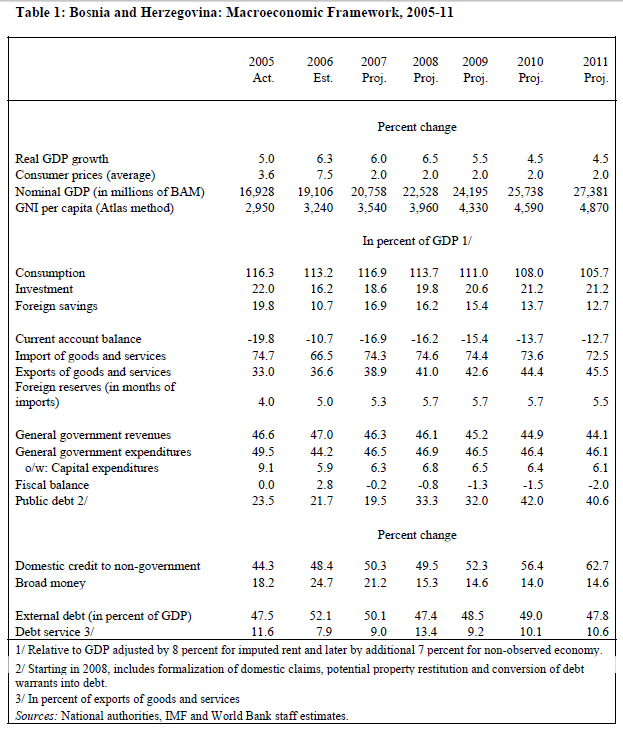