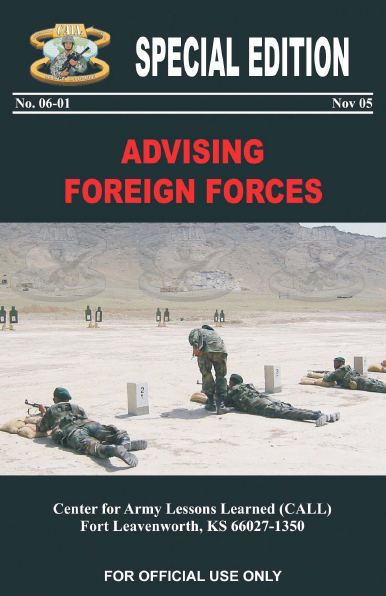 The purpose of this special edition is to provide a practical reference guide for individuals and units to use in preparation for missions as trainers and advisors to foreign military units. The publication includes tactics, techniques, and procedures successfully used by both United States Army special operations forces (SOF) and conventional forces in conducting foreign military training (FMT). The final section of the special edition is an explanation of the security assistance process and includes the organizations involved in planning and resourcing foreign training missions and their respective responsibilities.

Part I. Working with Indigenous Forces

The following guide was prepared by Army SOF personnel as a class for incoming conventional troops assigned as trainers to foreign units. This information is based on SOF experience training foreign forces and explains the basic skill sets and factors that assist non-SOF Soldiers in becoming effective military advisors and trainers.

Every Soldier in the U.S. military has experienced or conducted the type of training involved in foreign internal defense. Training and military skills used by all advisors are derived from such things as training individual fire team members or attending professional development courses at an Army school.

The initial step in assuming the role as an advisor is to dispel the mystique of training foreign soldiers. The primary obstacle is the language barrier. Language issues are easily surmountable by conducting detailed rehearsals with interpreters and conducting all training as practical, hands-on events with realistic scenarios. The U.S. Soldier assigned as an advisor may be an experienced combat veteran, but he is a trainer by profession. Confidence and professionalism are fundamentals that foreign troops understand and respect.

1.3 The Goal of Advisory Assistance

The United States provides military assistance to other nations as part of U.S. foreign policy strategy. The ultimate goal is to enhance American security. The intent of assistance programs is to develop the recipient nation’s capacity to assume responsibility for its own security. The role of the U.S. advisor is to develop a positive rapport with his counterparts and to influence the actions of the units he is working with. Personal influence is one of the primary factors determining the success of advisory operations. Even if relations with a counterpart are tenuous, some influence is inherent due to the fact of the referent power being a representative of the U.S. military.

Influence is an intangible element built on personal relationships and other factors. An advisor can gain influence by providing the following:

Mediocre advisors who do not understand the dynamics of establishing personal relationships are often reduced to a liaison role. Effective advisors are able to see solutions to seemingly unsolvable problems, sometimes guided only by commander’s intent. Added to the challenge of being an advisor is the requirement to work through the counterpart’s chain of command. Overly hard-charging and ambitious advisors will have a difficult time building up a new unit’s confidence while operating behind the scenes. The advisor is part diplomat, part warrior. Be aware of local power struggles and the effect on the mission.

Potential flash points between groups or organizations may exist at the lowest levels. Bureaucratic power struggles occur in the U.S. as well, but in developing
countries situations can quickly escalate out of control. Recognizing and managing these relationships is a key part of advising.

“Counterpart sources reported that two soldiers were assaulted and arrested and that the local police had threatened other soldiers. The counterpart battalion commander traveled to the provincial police station to discuss the situation. The soldiers were released and a warrant issued for the arrest of the two local police responsible for the incident. Relations between the army and police have been improving. Counterpart sources feel this incident may be due to recent counterinsurgency operations in the province. Some of the individuals detained on these operations have connections to provincial government and police personnel. Trainers will continue to monitor the situation.”

1.7 Psychological Pitfalls and Traits for Success

• Culture shock (overwhelming rejection of the new environment)
• “Going native” and losing site of U.S. objectives (overwhelming acceptance of the new environment)
• Usurping a counterpart’s authority with his subordinates (taking charge at inappropriate times)
• Frustration with the ambiguity caused by a lack of clear guidance (no command direction)
• Frustration with a counterpart’s unwillingness to conform to U.S. doctrine, standards, tactics, techniques, and procedures (TTP) (impatience, short time horizon)
• Rolling over to please a counterpart; sacrificing credibility to build rapport (not taking charge at all)
• Being an “ugly American” (see culture shock and the comments below)

Show respect for counterparts. There are U.S. military personnel who find it difficult to interact with foreign troops or officials. Some advisors only talk to their interpreter (and not to the foreign participants) during meetings. Other advisors make insulting or degrading comments about the locals in the meeting, thinking none of them understand English. Reassign anyone that cannot overcome their reluctance to act respectfully with foreign counterparts.

Qualities of an effective advisor: