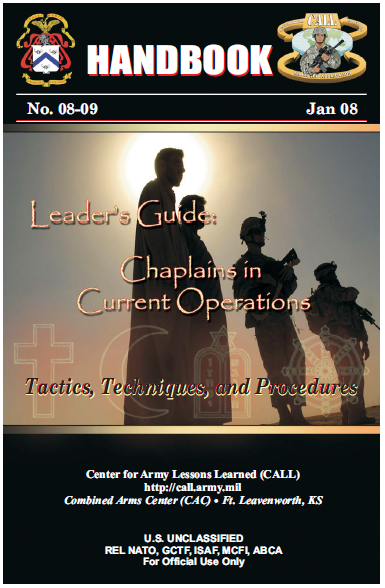 The United States and our allies are fighting terrorists who have defined this conflict as religiously based. Commanders on both sides have identified the center of gravity as the popular support of the people and understand the value of leveraging the religious aspects of the indigenous culture. Coalition commanders must apply that knowledge to support the overall objectives. Using chaplains, whose expertise includes religion and religious culture, shows great potential for success for enabling operational goals.

This handbook is a valuable tool for leaders to explain how and why religion plays a role in the military decision-making process, how chaplains should interface with local religious leaders, and how chaplains are key members of their commander’s team. Its lessons are applicable to any theater and war.

Chaplains are a key resource for commanders. They help commanders understand the religious impact of military operations.

The religious impact picture in the operational area is an important piece of information for commanders as they develop plans, rules of engagement, schemes of maneuver, and operations.

U.S. military and Canadian Forces’ chaplains have significant experience deploying in support of domestic tragedies all over the world, including hurricane relief; airline disaster search, rescue, recovery, and debris retrieval; earthquake and tidal wave assistance; wildfire support; search and rescue; or other disasters.

An example of a natural disaster response is providing emergency aerial drops of rations to starving refugees. If the rations contain food forbidden by the religious beliefs of the refugees, the intended goodwill gesture could adversely affect the relief effort and the positive press coverage the delivery of emergency supplies was intended to produce. The chaplain has a definite responsibility to advise the commander of religious taboos.

The primary focus of homeland security and disaster response operations is assisting local, state, national, and international agencies in providing humanitarian assistance to survivors. In homeland security operations, military chaplains may provide religious support to civilian disaster victims during emergency operations. The ministry is limited to the designated disaster control area and ceases with the termination of emergency operations. Moreover, the primary focus of military chaplain ministry remains DOD personnel.

Chaplains in foreign humanitarian assistance planning and execution operations, in coordination with civil affairs personnel, may provide pastoral support to refugees and dislocated civilians only when directed by the joint force commander after consultation with the staff judge advocate.

The chaplain’s insignia becomes a powerful restorative and comforting symbol for survivors, rescue workers, families of victims, and the community in general. Chaplains can be invaluable in communicating with civilians and civilian faith communities in a disaster situation.