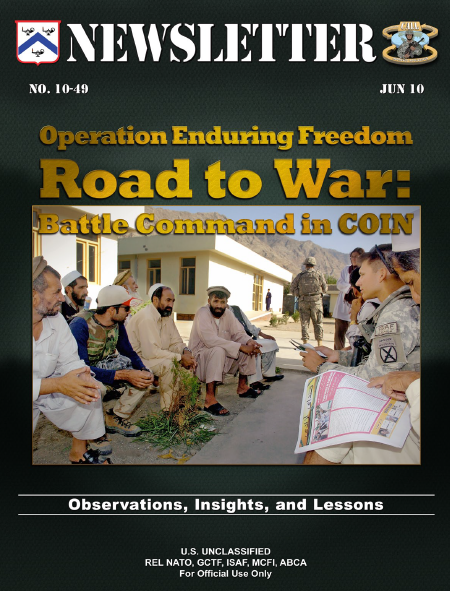 This newsletter was produced in conjunction with the Counterinsurgency (COIN) Training Center–Afghanistan (CTC–A) to provide current and relevant information for brigade combat team (BCT), battalion, and company commanders and staffs concerning current U.S. and coalition best practices in support of Operation Enduring Freedom. As a “living document,” it will be updated continuously in order to capture, analyze, and disseminate critical information in support of operations across all lines of effort. It will disseminate key observations, insights, and lessons (OIL) from theater to give commanders a better understanding of the operational environment into which they are preparing to deploy. The information is from your peers—commanders, staff officers, and small unit leaders —who served or who are currently serving in Afghanistan.

This newsletter provides “a way” to better understand and apply counterinsurgency and stability operation fundamentals in preparation for deployment. Key concepts include:

• Synchronizing the combined efforts of the Afghan government, Afghan Security Forces, combat advisors, BCTs, provincial reconstruction teams (PRTs), agricultural development teams, other governmental agencies, and enablers to achieve the commander’s goals. • Assisting commanders in the development of predeployment training plans, focusing both on combat skills and nonlethal aspects of operations.
• Enhancing the development of host nation security forces through best practices and OIL.
• Developing a long-term plan that integrates operations against all lines of effort.
• Integrating information operations into all plans and orders.
• Achieving better cultural understanding in the operational environment.
• Integrating PRTs with unit plans and operations to attain heightened situational understanding and unity of effort.

The ability to target key tribal, village, and district leaders is essential to building a bond between the Government of the Islamic Republic of Afghanistan (GIROA), ANA, Afghan National Police (ANP), and the ISAF. Engaging leaders over security alone will not separate the insurgents from the population or gain support for the GIROA. True concern for the needs of a tribe, village, and district with honest commitments is just as important. One needs to support the population, which is gained by applying the appropriate influence. If you can shape the operational environment by nonlethal means, the population becomes more flexible in its support of the lethal targeting of insurgents. However, without the ability to provide security, no amount of improvements in the standard of living will convince local leaders and their tribes to support the GIROA. Once the GIROA has established security in the isolated villages so insurgents cannot mass against them, then conditions can be set for effective reconstruction.

The use of the ANA or ANP, human terrain teams, provincial reconstruction teams, embedded training teams, and civil affairs using ASCOPE (area, structures, capabilities, organizations, people, and events) or PMESII (political, military, economic, social, infrastructure, and information) to assess villages and districts and their leaders leads to more focused key leader engagements (KLEs). Using ANA, ANP, or IROA representatives provides access to those who can influence the reduction of insurgent activities, reduce village support to insurgents, and boost support to the GIROA.

The KLE is about the individual, his cultural norms, his tribe, and his need to maintain control of his environment. Depending on the area, a key leader’s ethical decisions are not necessarily based upon a rigid moral compass but upon moral imperatives. Ethics are based on self-interest and self-preservation. Using one’s family, clan, village, or tribe is expected. Why else would a public official hold office?

Tribal engagement is an important aspect of the COIN effort in Afghanistan. The tribal system in Afghanistan is a strong facet of day-to-day life. The system of government establishing itself in Afghanistan has sub-governors in each district, a governor for the province, and a parliament and president for the country. The elders represent their villages and tribes; the government must have the support of the elders if it is to survive. The majority of the population still views the elders as the decision-makers as opposed to the government representatives. This is evidenced when the elders ask for a prisoner release after a person is arrested by either the ANA or coalition forces. The elders will ask for release because they collectively “vouch” for the prisoner’s innocence and still believe the tribal system is a much more appropriate method for dealing with criminals. Efforts are constantly made to convince the elders that the person was arrested based on evidence collected according to the new Afghan law system outlined in the new Afghan constitution.

Tribal elders are reluctant to submit to the proposed system of government for a number of reasons. According to the proposed system of law, power is taken away from the tribal elder and given to an elected official. The tribal elder has been the cornerstone of Afghan governance for thousands of years, and elders are not willing to relinquish this power to someone who may be from a different tribe. Elders assume that their tribe or sub-tribe will not be represented appropriately, and they often are correct in this assumption. Tribal loyalty, in many cases, is more important than loyalty to the country of Afghanistan. Elders are not willing to place a united Afghanistan over advancement of their particular tribe.

ANA operations and tribal engagements are the keys to convincing the population and elders of Afghan government efforts and the importance of a united Afghanistan.

ANA is tasked with securing the country. Progress in governance can be made only when security is established. Only after security is established will the elders and the general population see the GIROA as a legitimate force for stabilizing the country. Integral to the stabilization of Afghanistan is allowing the tribes to retain their individual identities while conceding some power to the new system of governance. This can be accomplished only through the engagement of tribal elders by Afghanistan National Security Forces (ANSF) and GIROA representatives.

Tribal elders in close vicinity to ANA or coalition firebases and outposts are much more likely to support the GIROA government. Enemy groups and facilitators constantly engage local villagers, but most of the time they get little or no support because of constant ANA and coalition presence. The Afghan people understand power, and they will support the element that, in their eyes, has the power—either the ANSF or the enemy. The elders know the enemy can affect them more in remote areas, so they will harbor enemy facilitators more readily than elders who are near coalition firebases. The elders near a coalition or ANA presence understand the power of the ANA to arrest any facilitators that harbor enemy elements.