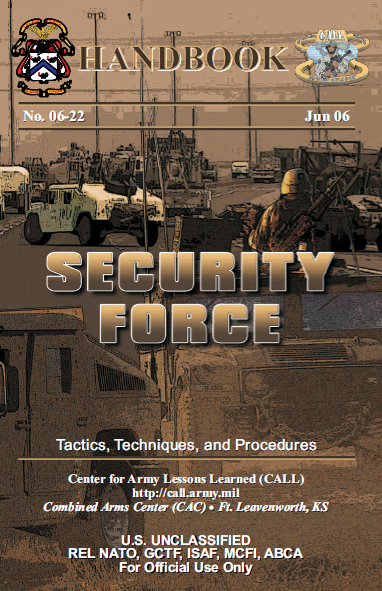 Throughout the Iraqi theater, units tailor security forces in order to meet the requirements of the mission. The equipment used is also modified depending on the operating environment. However, most security forces share common building blocks used in this handbook.

Tactics, techniques, and procedures (TTP) in this handbook are based on the model of a common base security force unit. The basic security force platform is generally the M1114, the XM1117 (armored security vehicle), the RG31 (multipurpose vehicle), or an equivalent gun truck. Designated security force companies are currently equipped with the M1114s as their main gun truck. Each platform has a minimum of three Soldiers: a truck commander, gunner, and driver.

Modification tables of organization and equipment (MTOE) designated security force units can be task-organized to any battalion. Generally security force units are not task-organized below company/battery level; however, it is common to see platoons designated a specific mission for extended periods of time, i.e., as a police transition team (PTT), convoy security, or personal security detachment (PSD). Many company-size units (usually field artillery) are transforming into MTOE security force companies. MTOE security force companies consist of three platoons plus an additional platform for the commander. Each platoon consists of three squads, plus an additional platform for the platoon leader. This composition gives the company a total of 40 platforms plus additional vehicles for support personnel. Most battalions also have an internal security force unit primarily for PSD and occasionally for convoy security. The composition of these internal security forces depends on platform availability, type of mission, and scope of the operation. This handbook also provides these types of security forces valid TTP, as well as common before, during, and after considerations for their operations.

a. Convoy security. Both military and civilian convoys are subject to attack from insurgents, necessitating constant security. While most military convoys will have an internal security force, civilian convoys do not have that capability. For this reason security forces are often tasked to escort convoys consisting of two or more vehicles. The size of the convoy determines the number of required security force squads. The general rule of thumb is one platform (M1114) for every five vehicles in the civilian convoy. Platoon leaders may choose to add platforms to squads or lead a mission with multiple squads. (Note: Types of convoys often escorted are listed in Annex A).

b. PSD. PSD is conducted regularly by almost every unit in Operation Iraqi Freedom. PSD may include the security of a unit commander or sergeant major, a dignitary or local leader, or even a detainee. Security forces are charged with escorting VIPs from point A to point B. Given the operating environment in Iraq, a well-trained PSD is essential for the safety of VIPs and the Soldiers conducting the missions.

d. Other missions. While other missions are beyond the scope of this handbook, it is important to note security forces conduct numerous other types of missions. The most current (FY 2006) critical mission is training the Iraqi Police (IP). This mission requires security forces and MP units to link and develop habitual relationships with the IP. Some units man the IP basic training academies, while others monitor IP station progress and provide additional training. This mission also requires Soldiers to fully understand how Iraqis conduct business. Soldiers must be prepared to conduct a variety of classes with the assistance of an interpreter. Knowledge of basic police station administrative requirements will assist in this mission.

Another common mission is detainee operations. Most forward operations bases (FOBs) have some sort of detainee facility. The responsibility for maintaining security inside and outside the facility often falls to security forces. This responsibility includes the daily health and welfare of the inmates and their administrative and logistical requirements, as well as the movement of detainees within the FOB or to other sites. Occasionally security forces will transport detainees by air to distant FOBs.

When contact is made with the enemy, security forces must be prepared to engage and destroy the enemy. Security forces should develop basic contact battle drills aimed at maneuvering, fixing, and eliminating the enemy.