The following document was obtained from the website of the Canadian Association of Chiefs of Police. 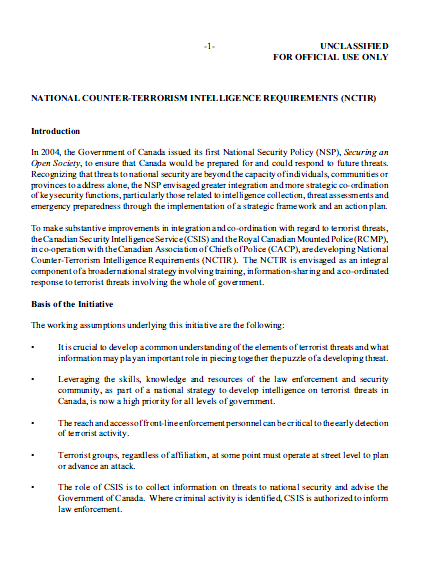 In 2004, the Government of Canada issued its first National Security Policy (NSP), Securing an Open Society, to ensure that Canada would be prepared for and could respond to future threats. Recognizing that threats to national security are beyond the capacity of individuals, communities or provinces to address alone, the NSP envisaged greater integration and more strategic co-ordination of key security functions, particularly those related to intelligence collection, threat assessments and emergency preparedness through the implementation of a strategic framework and an action plan. To make substantive improvements in integration and co-ordination with regard to terrorist threats, the Canadian Security Intelligence Service (CSIS) and the Royal Canadian Mounted Police (RCMP), in co-operation with the Canadian Association of Chiefs of Police (CACP), are developing National Counter-Terrorism Intelligence Requirements (NCTIR). The NCTIR is envisaged as an integral component of a broader national strategy involving training, information-sharing and a co-ordinated response to terrorist threats involving the whole of government.

Basis of the Initiative

The working assumptions underlying this initiative are the following:

• It is crucial to develop a common understanding of the elements of terrorist threats and what information may play an important role in piecing together the puzzle of a developing threat.
• Leveraging the skills, knowledge and resources of the law enforcement and security community, as part of a national strategy to develop intelligence on terrorist threats in Canada, is now a high priority for all levels of government.
• The reach and access of front-line enforcement personnel can be critical to the early detection of terrorist activity.
• Terrorist groups, regardless of affiliation, at some point must operate at street level to plan or advance an attack.
• The role of CSIS is to collect information on threats to national security and advise the Government of Canada. Where criminal activity is identified, CSIS is authorized to inform law enforcement.
• The RCMP, through the operation of several statutes, has the primary responsibility of performing the duties assigned to peace officers, such as arrests, detentions or prosecutions of individuals involved in activities that constitute a threat to the security of Canada.
• CSIS, in co-operation with the RCMP and the CACP, has developed NCTIR.
• The purpose of NCTIR is to inform and sensitize, not task, the law enforcement community as to the valuable information they may incidentally encounter during the performance of their duties.
• NCTIR allows for a more effective two-way dialogue between CSIS and law enforcement on terrorist threats.
• NCTIR will be updated periodically and integrated into a broader training and information program led by the RCMP.

The NSP articulated three core national security interests: protecting Canada and Canadians at home and abroad, ensuring Canada does not become a base for threats to our allies and contributing to international security. The NSP describes the four types of terrorism affecting Canada: religious extremism, violent secessionist movements, state-sponsored terrorism and domestic extremism which result in violence and threaten Canadians.

The leading threats to Canadians – terrorism and certain types of organized crime – are beyond the capacity of individuals, communities or provinces to address alone. The NSP recognizes that the complexity of threats facing Canada requires a co-ordinated and integrated national security framework enabling this country to respond to existing threats and quickly adapt to new ones. The Canadian system needs to be fully connected to key partners at all levels: provinces, territories, communities, first-line responders, the private sector and Canadians together.

Intelligence is recognized as the foundation enabling effective measures to be enacted for the security of Canada and Canadians. To effectively manage risk, design programs and allocate resources requires a sound understanding of the environment, along with the best possible information about the threats, intentions and capabilities of those who would do us harm.

The nature of intelligence is such that there is rarely, if ever, a complete picture. Rather, intelligence reporting and assessments are based on fragmented and sometimes contradictory information. It is, therefore, essential to bring together information on threats to Canada from all available sources and properly assess it, in order to provide as accurate and complete a picture as possible. It is critical that the resulting product be conveyed in a timely, accurate and usable manner to those whose actions or decisions depend on it.

1. To identify the capabilities, intentions and inter-relationships, including recruitment, membership, radicalization, training, means of communication, the role of the Internet, the means and methods of fundraising and the deployment of individuals, either in Canada or abroad, who support:

• Global Jihad (GJ) and Islamist Extremism (IE).
• Hizballah.
• Secessionist movements, including but not limited to the Tamil Tigers (LTTE), Babbar Khalsa International (BKI), and the International Sikh Youth Foundation (ISYF).
• The use of serious violence directed at Canadian interests, including the Canadian military, diplomats, foreign aid workers or other official personnel abroad.
• The procurement, development or possible use of chemical, biological, radiological, nuclear or explosive material for use in violent activities related to any NCTIR.
• The involvement of criminal activity including fraud, theft, extortion, document forgery, illegal migration or immigrant smuggling suspected to be in support of an NCTIR.

COLLECTION CRITERIA IN SUPPORT OF NCTIR

Individuals linked to an NCTIR travelling to and from ‘hot zones’, including but not limited to Afghanistan and environs, Bosnia, Chechnya, Iran, Iraq, the Palestinian territories, Pakistan, Yemen, Somalia, Sudan, Syria and Tunisia.

Individuals advocating or glorifying violence through the importation, production or distribution of videos or other media, and the physical or electronic circulation of video images of terrorist or insurgent attacks in ‘hot zones’, for the purpose of propaganda, recruitment or training, or sponsorship, operation or use of Web sites, chat rooms or blogs significantly linked to an NCTIR.

Individuals proselytizing or invoking an extreme, jihadist interpretation of Islam for the purpose of recruiting fighters, glorifying jihadist violence or inciting hatred against an identifiable group, particularly citizens or the military of Canada, the US, the UK or any other ally.

Facilities, including religious, academic, public, private or commercial buildings and structures, used permanently or temporarily for the purpose of:

• Recruiting fighters, advocating or glorifying violence, inciting hatred or supporting such activities.
• Training or indoctrinating those linked to an NCTIR, directly or indirectly, such as paramilitary activities, paint-ball, martial arts or other self-defence training, survival skills or extreme sports and training in the use of electronic devices or communications equipment.
• Supporting or facilitating activities directly or indirectly, as referenced above, such as storage facilities, cache sites, guest houses, safe houses or venues of convenience.
• Bomb-making, including facilities with indications of inordinately high electrical power consumption, reports of unusual chemical smells, blacked out windows or damaged pipe systems, any of which may indicate the possibility of bomb-making activities.

Individuals or groups, including public officials, involved in, and methods related to:

• The acquisition or fabrication of false documents, including passports, other travel documents, primary documents such as birth or death certificates, driver’s licences and citizenship documents. This includes equipment related to the illicit fabrication or altering of documents such as photocopiers, commercial grade flatbed scanners, printing or laminating equipment.
• The acquisition or provision of legitimate documents through false declarations or deceit, which are knowingly provided by the true owner or facilitated by a guarantor with possible or direct knowledge of the intended use. This will include reviewing the passports or travel documents of individuals of interest, wherever possible, to verify travel and to ensure the information contained therein is valid and consistent with applications for same.

Definable networks associated to any of the aforementioned requirements. This includes familial, kin, clan, tribe, school or village ties.

Individuals who have fought in or met while fighting jihad or other violent movements abroad or in foreign wars.

Individuals or groups linked to NCTIR who are involved in the procurement of:

Information related to the NCTIR should be reported through the intelligence function of the various entities directly to CSIS regional offices and to the Integrated National Security Enforcement Teams (INSET).