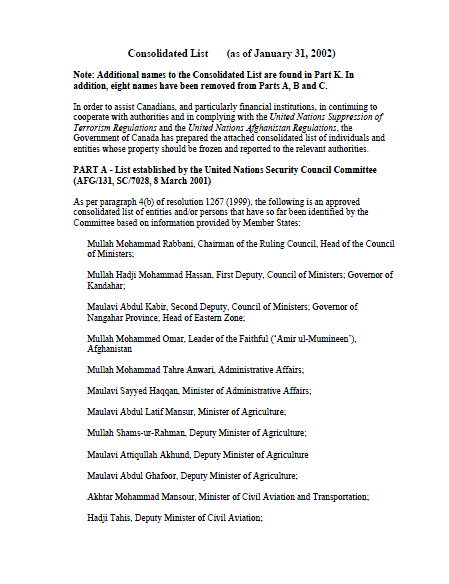 Office of the Superintendent of Financial Institutions

Note: Additional names to the Consolidated List are found in Part K. In addition, eight names have been removed from Parts A, B and C.

In order to assist Canadians, and particularly financial institutions, in continuing to cooperate with authorities and in complying with the United Nations Suppression of Terrorism Regulations and the United Nations Afghanistan Regulations, the Government of Canada has prepared the attached consolidated list of individuals and entities whose property should be frozen and reported to the relevant authorities.

As per paragraph 4(b) of resolution 1267 (1999), the following is an approved consolidated list of entities and/or persons that have so far been identified by the Committee based on information provided by Member States:

Mullah Mohammad Rabbani, Chairman of the Ruling Council, Head of the Council of Ministers;

Maulavi Mohammad Wali, Minister of Department of Preventing Vice and

Furthermore, as per paragraph 8(c) of resolution 1333 (2000) adopted on 19 December 2000, the Committee approved the following consolidated list of individuals and entities associated with Usama bin Laden (UBL), including those in the Al-Qaida organization:

Saqar Al-Jadawi. Born C. 1965. Thought to be a Yemeni and Saudi national. Aide to UBL.

The above lists will continue to be revised as necessary. The Committee encourages Member States to bring to its attention any information they may have concerning funds, financial resources, as well as entities and/or persons.