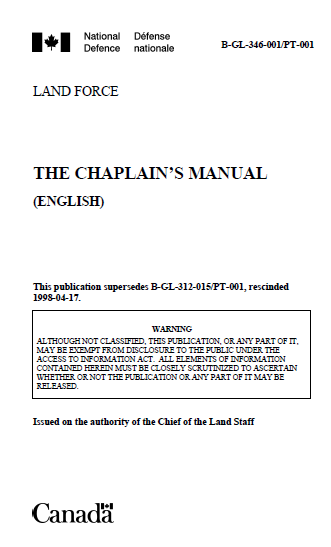 1. The Canadian Charter of Rights and Freedoms guarantees the
“freedom of conscience and religion” for every Canadian.
Accordingly, CF regulations direct that, subject to operational and
service exigencies, commanding officers shall make provision for
spiritual service support and religious accommodation for the soldiers
under their command.

2. Freedom of conscience and religion may be exercised by
soldiers in a number of ways, including:

3. A soldier’s freedom of conscience and religion is also
exercised when he/she chooses to abstain, for the sake of conscience,
from participation in religious services or ceremonies. Regulation
prohibits requiring any soldier to participate in a religious service
parade, unless it is in connection with Remembrance Day observances,
a military funeral, or a ceremony of significant civic or memorial
nature.

4. Commanders and chaplains have distinct roles and
responsibilities with respect to the provision of religious support to
soldiers and their families.

8. Attending to the importance of spiritual development and
care amongst our soldiers and families is vital to the development of a
healthy Army Culture. Spiritual values strengthen resolve and
promote decency, and they nourish all other important human
characteristics that touch the human spirit: comradeship, respect for
others, selfless commitment, and discipline. They allow soldiers more
easily to see themselves as having a vocation, that “soldiering” is a
way of life and service, not just a career or a job.

9. Spiritual values are noble: they inspire individuals to reach
out beyond themselves, many towards a higher power, while also
underpinning a vital sense of self-belief and self-worth. Spiritual
values foster a sense of identity, a growth of maturity throughout an
individual’s life, and a foundation for human motivations, particularly
in times of crisis. Spiritual values help an individual to address issues
of life and death, meaning and significance, guilt and forgiveness,
good and evil.

10. The longstanding principles of effective war-fighting have
consistently acknowledged the vital importance of soldier morale.
Field Marshal Montgomery listed four key factors that constitute the
morale of a soldier in battle:

a. leadership,
b. discipline,
c. comradeship, and
d. self-respect.