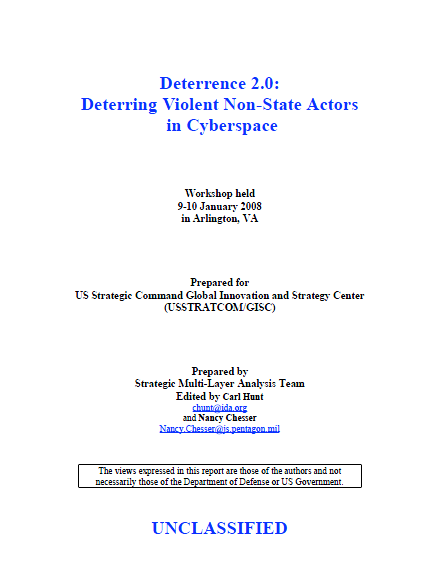 The chapters before you were born from the examination of two fundamental questions regarding the nature and theory of deterrence in the 21st century. First we had to consider what had changed since our victory in the Cold War (the experience from which most of our current doctrine is derived); and, armed with that understanding, consider how the United States might execute deterrence strategy in this new era. Our study revealed elemental shifts in the state of play that required more than “tweaking” on the margins of our thinking. Our observations compelled us to challenge the epistemological underpinnings of traditional nation-state deterrence models. What can be held at risk as we seek to deter the violent metastasis of ideas propagated over the Internet? How can we prevail in a global marketplace of ideas without compromising our own sacred values? The enclosed pages contain comments, insights and recommendations that transcend any thinking about deterrence that has ever gone before those of us in uniform. As evidenced by the sage words of James Fallows in the Foreword to this report, the ideas contained within are “worth reading.” The Deterrence of Violent Non-State Actor Workshop during the period of 9-10 January 2008 was a special event that was both compelling and timely.

So what has changed? Of course, the answer is rather obvious yet curiously underrepresented in the recent deterrence scholarship. Humanity is undergoing a transformation from the Industrial Age characterized by machinery, factories, urbanization and measured change where resources, production and optimization were the source of wealth and power, to an Information Age, defined by knowledge and networks, interconnectedness, globalization, adaptability, agility, innovation and rapid change. New rules sets are emerging that cannot be predicted and with them come opportunities, creativity and societal dislocations that often breed violence and instability.

Like Damocles’ sword, this global interconnectivity both strengthens us and moderates us at the same time. We are strengthened because we are better connected to others than ever before and thus capable of spreading the seeds of liberty and opportunity to populations that yearn for it and where the lack of it is still being justified. We are moderated by this interconnectivity because others can more easily exploit the seams and turn our freedoms against us to infect with vitriolic propaganda that violently radicalizes populations across this interconnected web. It is the matter of moderation of our strength that brought together the remarkable group of thinkers whose words are reflected within this report. We are concerned here with the problem of deterring violent non-state actors from doing harm to our nation and to our allies. The questions of extending freedom through access while mitigating the misuse of that freedom to harm us were the dominant questions we took up in this workshop. This report captures the intellectual power and dynamic interactions that took place during these two days and must be read by today’s and tomorrow’s decision-makers. These thoughts will inform the planning and execution of deterrence principles for years to come.

For violent non-state actors (VNSAs) on a mission to spread their message, or cyberterrorists who just want to create mischief, cyberspace offers limitless resources and opportunities for achieving these goals. The Internet is unparalleled in its ability to grant individuals access to a mass audience in an environment that has almost no enforceable personal conduct regulations or monitoring capabilities. According to a report compiled by Dr. Gabriel Weimann of the United States Institute of Peace, as of 2004, all active terrorist groups had established a Web presence of some kind, with the intention of exposing current and potential supporters, as well as enemies, to their ideologies (Weimann, 2004). The behavior of such groups in cyberspace has been studied extensively and can be broadly classified by the impact it has on the cyber and corporeal realms. Figure 1 below depicts this interaction and categorizes the behavior according to its origin and impact. Cyber-psychological activities include dissemination of propaganda and disinformation, intimidation, and indoctrination via cyber-based communication channels. Cyber-cyber interactions describe efforts to negatively impact the cyber infrastructure, while attacks planned via cyber means that target the corporeal realm are illustrative of the cyber-corporeal connection. A final category of interaction that is germane to this discussion is the corporeal-cyber connection, which represents actions originating in the corporeal realm that affect the cyber infrastructure. Table 1 below provides examples of recent actions from each of these categories. This chapter focuses on the cyber-psychological and cyber-corporeal connections, with further discussion of the use of cyberspace by VNSAs to disseminate propaganda, recruit members, create publicity, collect and share data, network, plan, coordinate, raise funds, and wage psychological warfare (Weimann, 2004).

The wide-ranging and covert nature of VNSA activity in cyberspace makes modeling their emergent behavior a difficult task that requires a large-scale, multidisciplinary effort. The current paradigm combines technology and perspectives from the sub-disciplines of data collection, data mining and analysis, and predictive modeling; each of these contributes a piece to the puzzle. Automated data collection techniques address the issue of extracting “clean,” meaningful, and relevant information from the seemingly limitless datasets that constitute the cyberspace. The methodology must be able to locate a “needle-in-a-haystack”, since the activity is often intentionally hidden, scattered across many sites, and frequently moved or removed. However, without the kind of content-rich datasets that data collection techniques can provide, modeling is cumbersome and time consuming, if not infeasible. An example of such a dataset is the so-called ‘Dark Web’ collection, which contains about two terabytes (2 TB) of extremist/terrorist related content collected using a semi-automated Web-crawling approach developed by researchers at the University of Arizona’s Artificial Intelligence Lab (Univ. of Arizona, 2008).