The following is a draft report from Customs and Border Protection's Office of Intelligence that was obtained and published by Foreign Policy. 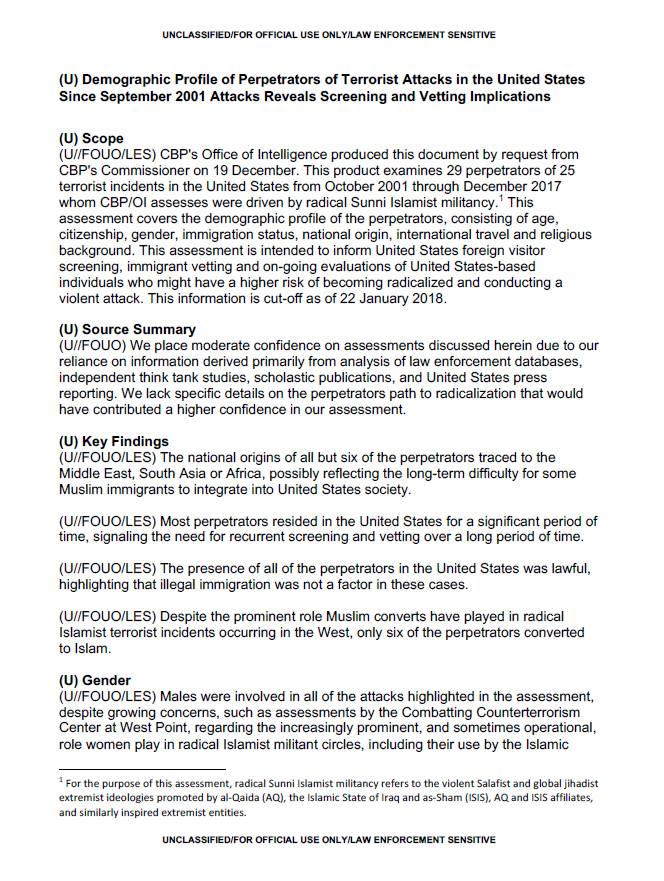 (U//FOUO/LES) CBP’s Office of Intelligence produced this document by request from CBP’s Commissioner on 19 December. This product examines 29 perpetrators of 25 terrorist incidents in the United States from October 2001 through December 2017 whom CBP/OI assesses were driven by radical Sunni Islamist militancy.1 This assessment covers the demographic profile of the perpetrators, consisting of age, citizenship, gender, immigration status, national origin, international travel and religious background. This assessment is intended to inform United States foreign visitor screening, immigrant vetting and on-going evaluations of United States-based individuals who might have a higher risk of becoming radicalized and conducting a violent attack. This information is cut-off as of 22 January 2018.

(U//FOUO) We place moderate confidence on assessments discussed herein due to our reliance on information derived primarily from analysis of law enforcement databases, independent think tank studies, scholastic publications, and United States press reporting. We lack specific details on the perpetrators path to radicalization that would have contributed a higher confidence in our assessment.

(U//FOUO/LES) The national origins of all but six of the perpetrators traced to the Middle East, South Asia or Africa, possibly reflecting the long-term difficulty for some Muslim immigrants to integrate into United States society.

(U//FOUO/LES) Most perpetrators resided in the United States for a significant period of time, signaling the need for recurrent screening and vetting over a long period of time.

(U//FOUO/LES) The presence of all of the perpetrators in the United States was lawful, highlighting that illegal immigration was not a factor in these cases.

(U//FOUO/LES) Despite the prominent role Muslim converts have played in radical Islamist terrorist incidents occurring in the West, only six of the perpetrators converted to Islam.

(U//FOUO/LES) Males were involved in all of the attacks highlighted in the assessment, despite growing concerns, such as assessments by the Combatting Counterterrorism Center at West Point, regarding the increasingly prominent, and sometimes operational, role women play in radical Islamist militant circles, including their use by the Islamic State of Iraq and ash-Sham (ISIS).(2) There was only one incident, where a female, the wife of the male perpetrator, was also involved in carrying out the attack.

(U//FOUO/LES) Case studies over the past few years conducted by both federal and private entities yielded similar age-ranges after reviewing various comparable subsets of individuals. Our study found the average age of the 29 perpetrators was 28 years, ranging from 17 to 49 years of age at the time they were arrested or killed. The average age of perpetrators who conducted attacks in North America and Europe following ISIS’ declaration of its self-proclaimed caliphate in June 2014 was a similar 27.3 years old, according to independent think tank findings.(3) According to one scholastic publication, the average age of United States individuals arrested due to their associations with ISIS was 26. (3) We assess that 14 out of the 15 individuals born outside the United States spent approximately 10 years in the United States prior to their attacks; the remaining foreign born perpetrator was a Canadian resident visiting the United States.

(U//FOUO/LES) The national origins of all but six of the perpetrators traced to the Middle East, South Asia or Africa, likely reflecting the long-term difficulty for some Muslim immigrants to integrate into U.S. society. Just over half of the perpetrators were born outside the United States and over four-fifths (86%) of those immigrated as a minor or resided for a significant period of time (approximately 10 years) in the United States, indicating that the radicalization of these individuals likely occurred after immigrating. The remaining perpetrators born outside the United States resided in the country for two years or less, suggesting that they could have arrived in the United States already radicalized. The presence of all of the foreign-born perpetrators in the United States was lawful, highlighting that illegal immigration was not a factor in these cases and that possibly some militants are heeding calls by ISIS and AQ to take up arms in their Western countries of residence as opposed to traveling abroad to participate in foreign conflicts.

(U//FOUO/LES) We assess that only six of the perpetrators-or about 20 percent converted to Islam, which is in line with a 2017 independent think tank that found 23-percent of United States Muslims are converts (4)- despite the prominent role Muslim converts have played in radical Islamist terrorist incidents occurring in the West, according to a body of academic, media and anecdotal reporting. (5) (6) (7)

(U//FOUO/LES) CBP/OI assesses that the factors contributing to an individual’s decision to perpetrate an act of terrorism reflect a highly personalized set of circumstances. The cohort of perpetrators represents migrants to the United States, U.S.-born citizens, including six converts to Islam with backgrounds that are comparable to other Sunni Islamist extremist cohorts. Demographic factors such as age, national origin, length of residence, immigration status or travel history can inform evaluations, but are not determinative, when assessing an individual’s susceptibility to violent extremism. While the sense of perceived marginalization of some Muslim immigrants may represent an important factor in the radicalization process, we assess with low confidence that the motivations of at least some of the perpetrators centered on their failure to assimilate in United States society.