Customs and Border Protection Use of Force Policy Handbook Unredacted

A version of the following Use of Force Policy Handbook for U.S. Customs and Border Protection (CBP) was released March 7, 2014 following congressional inquiries into allegations of excessive use of force by CBP agents.  The version released by CBP contains a number of redactions throughout the document.  Despite articles from Buzzfeed and a number of other news outlets praising the document’s release, a complete, unredacted version of the document was already available online after having been published in January 2014 by the Center for Investigative Reporting’s Andrew Becker. 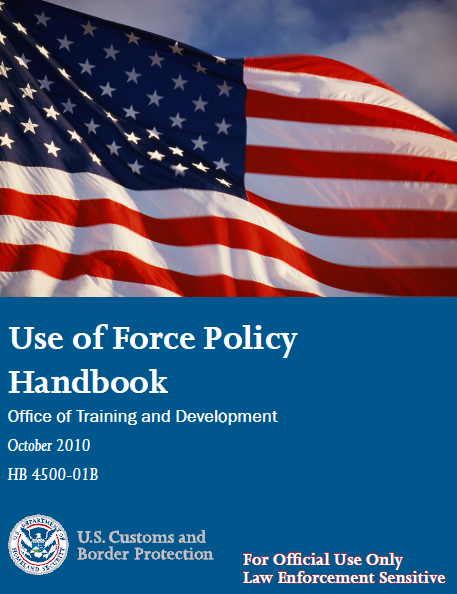 CBP Office of Training and Development

As specified in the Handbook, OTD, through the Use of Force Policy Division (UFPD), is responsible for the development and articulation of all CBP use of force policy. As the CBP lead for use of force and threat management policy, UFPD ensures that each CBP policy, directive, and procedure describing when and how CBP employees use force is in conformance with the provisions of this Policy, which incorporates the DHS Use of Deadly Force Policy (Appendix II), and the DHS Commitment to Race Neutrality in Law Enforcement Activities (Appendix III).

By conforming to standard use of force policies, procedures, training, and equipment, CBP personnel are able to more effectively and professionally protect themselves and the public they serve. As CBP personnel, this Handbook serves as your authoritative reference for firearms and use of force related issues. Therefore, you must become intimately familiar with its contents.

Chapter 4: Use of Force

1. Only that force which is both reasonable and necessary may be used in any given situation. Reasonable means that there are objective reasons that justify the degree of force to be used in the given situation, up to and including deadly force. The “reasonableness” of a particular use of force is judged from the perspective of a reasonable officer/agent on the scene, and its calculus must embody an allowance for the fact that law enforcement officers/agents are often forced to make split-second decisions about the amount of force necessary in a particular situation. Necessary means that some force is required to carry out one’s duties as a law enforcement officer/agent.

2. Authorized Officers/Agents are to act in a professional manner and therefore shall not carelessly or unnecessarily display firearms and/or intermediate force devices. The authority to carry this equipment carries with it an obligation and responsibility to exercise discipline, restraint and good judgment.

3. The DHS Commitment to Race Neutrality in Law Enforcement Activities is contained in Appendix III and is applicable to all situations where officers/agents exercise their use of force authority.

4. Although the wording may be slightly different in the regulations set forth at 8 C.F.R. § 287.8 and § 287.9 (first promulgated by the former Immigration and Naturalization Service) CBP has determined that these regulations, as they apply to Authorized Officers/Agents, are consistent with the intent of the Use of Force Policy.

B. CBP Use of Force Continuum

2. It is not necessary to mechanically apply every step of the CBP Use of Force Continuum. An officer/agent may have to rapidly escalate or de-escalate through the Continuum, depending on the totality of the circumstances present.

Totality of circumstances refers to all factors existing in each individual case. These factors include, but are not limited to, the level of training, mental attitude, strength, age, the size of the officer/agent and the size of the subject. Additional factors may include the weapon(s) involved, presence of other officers/agents, subjects or bystanders and environmental conditions. In some situations, the proper initial response might be the application of deadly force.

3. Due to the unique circumstances and individual differences present in every potential confrontation, different officers/agents may have different responses to the same situation, all of which may be reasonable and necessary.

C. Use of Deadly Force

1. The Department of Homeland Security Policy on the Use of Deadly Force governs the use of deadly force by all DHS officers/agents and employees. The complete DHS policy is contained in Appendix II.

2. Authorized Officers/Agents may use deadly force only when necessary, that is, when the officer/agent has a reasonable belief that the subject of such force poses an imminent danger of death or serious physical injury to the officer/agent or to another person.

4. Discharging a firearm at a person shall be done only with the intent of stopping that person from continuing the threatening behavior that justifies the use of deadly force.

a. The subject has inflicted or threatens to inflict serious physical injury or death; and

b. The escape of the subject poses an imminent threat of death or serious physical injury to the officer/agent or to another person.

6. Firearms shall not be fired solely to disable vehicles, vessels, aircraft or other conveyances. The only exception is that Authorized Officers/Agents, when conducting maritime law enforcement operations, may use specifically authorized firearms and ammunition to disable moving vessels or other maritime conveyances.

7. Deadly force may be used against the driver or other occupant of a moving motor vehicle, vessel, aircraft or other conveyance only when:

a. The officer/agent has a reasonable belief that the subject of such deadly force poses an imminent danger of death or serious physical injury to the officer/agent or to another person and the hazard of an uncontrolled conveyance has been taken into consideration before firing; or

b. The public safety benefits of using deadly force outweigh the risks to the safety of the officers/agents and/or of other persons.

8. Deadly force may be directed against dangerous or vicious animals in self-defense or in defense of others. Deadly force may also be used to euthanize an animal that appears to be seriously injured or diseased. In doing so, the officer/agent must be able to justify the use of deadly force to prevent the animal from additional suffering, eliminate a public health risk or to ensure public safety.

9. The use of firearms to discharge chemical munitions or specially designed breaching munitions against structures does not constitute the use of deadly force, unless it is reasonable to believe that the use of such force may place individuals at substantial risk of death or serious physical injury.

10. Warning shots are not permitted, except as follows:

a. Warning shots may be used by Authorized Officers/Agents conducting maritime law enforcement operations, only as a signal for a vessel to stop (see Chapter 8).

b. Warning shots may be used by Authorized Officers/Agents conducting aviation law enforcement operations only as a signal to an aircraft to change course and follow direction to leave airspace (see Chapter 8).

11. In maritime situations where Authorized Officers/Agents believe that they are in imminent danger of being rammed, and the ramming or attempt to ram is believed to be intentional, CBP personnel can invoke deadly force in self-defense in the circumstances set forth below and in Chapter 8. To stop a ramming by using deadly force, the following criteria must be met:

a. The subject vessel must pose an imminent threat of serious physical injury or death to CBP personnel;

b. The ramming attempt must appear to the officer/agent to be intentional. If not specifically threatened, the intent to ram may be reasonably inferred based on facts and circumstances, including but not limited to the following:

(1) An uncooperative and belligerent attitude toward generalized warnings or orders to “heave to;” or

(2) An uncommunicative vessel which refuses to respond to CBP queries, signals, or presence, and does not appear to have difficulties in maneuvering, such as when a sudden change of course is obviously made to collide with the CBP vessel; and

D. Use of Intermediate Force

1. Intermediate force is defined as that force that is neither likely nor intended to cause death or serious physical injury.

2. Authorized Officers/Agents may use intermediate force when reasonable and necessary to:

a. Protect themselves or other persons from bodily harm;

b. Restrain or subdue a resisting detainee or subject;

In threatening, emergent situations, Authorized Officers/Agents are authorized to use any weapon available, appropriate to the level of force required, for self-defense or the defense of another person. However, this statement does not authorize the carrying of any weapon for duty use that is not authorized and listed in Appendix IV.