This is the Memorandum of Understanding provided by the Center for Copyright Information regarding their ISP Copyright Alert System, under which a number of ISPs, including Verizon Communications Inc, Comcast Corp, Time Warner Cable Inc, Cablevision Systems Corp and AT&T Inc, have agreed to alert customers, up to six times, when it appears their account is used for illegal downloading. Warnings will come as e-mails or pop-up messages and could ultimately result in service degradation or termination if ignored. 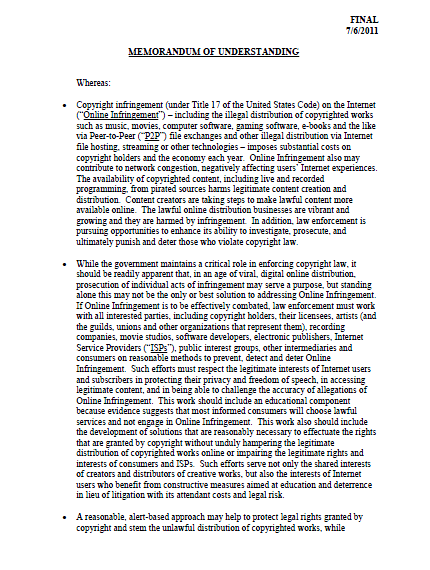 While the government maintains a critical role in enforcing copyright law, it should be readily apparent that, in an age of viral, digital online distribution, prosecution of individual acts of infringement may serve a purpose, but standing alone this may not be the only or best solution to addressing Online Infringement. If Online Infringement is to be effectively combated, law enforcement must work with all interested parties, including copyright holders, their licensees, artists (and the guilds, unions and other organizations that represent them), recording companies, movie studios, software developers, electronic publishers, Internet Service Providers (“ISPs”), public interest groups, other intermediaries and consumers on reasonable methods to prevent, detect and deter Online Infringement. Such efforts must respect the legitimate interests of Internet users and subscribers in protecting their privacy and freedom of speech, in accessing legitimate content, and in being able to challenge the accuracy of allegations of Online Infringement. This work should include an educational component because evidence suggests that most informed consumers will choose lawful services and not engage in Online Infringement. This work also should include the development of solutions that are reasonably necessary to effectuate the rights that are granted by copyright without unduly hampering the legitimate distribution of copyrighted works online or impairing the legitimate rights and interests of consumers and ISPs. Such efforts serve not only the shared interests of creators and distributors of creative works, but also the interests of Internet users who benefit from constructive measures aimed at education and deterrence in lieu of litigation with its attendant costs and legal risk.

1. Parties to the Agreement

The parties to this Agreement (the “Parties”) are The Recording Industry Association of America, Inc. (“RIAA”), The Motion Picture Association of America, Inc. (“MPAA” and together with RIAA, the “Content Owner Representatives”); the entities set forth in Attachment A (as may be amended from time to time) (collectively, the “Participating ISPs”); and solely for the purposes of Sections 2(E), 4(C), 4(D), 4(H), 4(I), 5(A), 5(C), 6, 7, 8, 9(E), 9(F), and 10 of this Agreement, MPAA members Walt Disney Studios Motion Pictures, Paramount Pictures Corporation, Sony Pictures Entertainment Inc., Twentieth Century Fox Film Corporation, Universal City Studios LLC, and Warner Bros. Entertainment Inc. (such MPAA members, together with MPAA, the “MPAA Group”), RIAA members UMG Recordings, Inc., Warner Music Group, Sony Music Entertainment, and EMI Music North America (such RIAA members, together with RIAA, the “RIAA Group” and together with the MPAA Group, and any other entities set forth in Attachment B (as may be amended from time to time), the “Participating Content Owners Group”).

The members of the Participating Content Owners Group are the following: