The following are photos and the text of a bulletin disseminated to local businesses by the City of London Police warning of possible extremist/terrorist threats arising from the Occupy London protests.  The bulletin’s authenticity has been confirmed by The Independent. 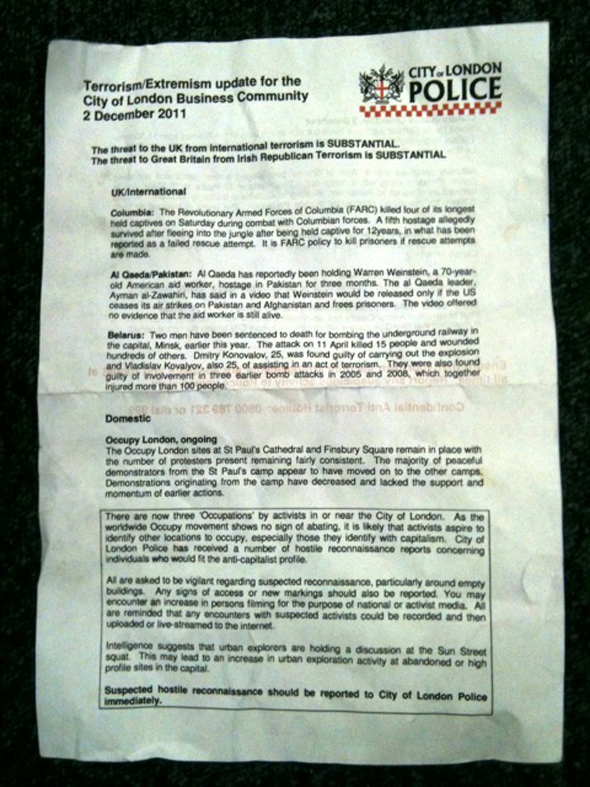 Columbia:  The Revolutionary Armed Forces of Columbia (FARC) killed four of its longest held captives on Saturday during combat with Columbian forces.  A fifth hostage allegedly survived after fleeing into the jungle after being held captive for 12 years, in what has been reported as a failed rescue attempt.  It is FARC policy to kill prisoners if rescue attempts are made.

Al Qaeda/Pakistan: Al Qaeda has reportedly been holding Warren Weinsten, a 70-year-old American aid worker, hostage in Pakistan for three months.  The al Qaeda leader, Ayman al-Zawahiri has said in a video that Weinstein would be released only if the US ceases its air strikes on Pakistan and Afghanistan and frees prisoners.  The video offered no evidence that the aid worker is still alive.

Belarus: Two men have been sentenced to death for bombing the underground railway in the capital, Minsk, earlier this year.  The attack on 11 April killed 15 people and wounded hundreds of others.  Dmity Konovalov, 25, was found guilty of carrying out the explosion and Vladislav Kovalyov, also 25, of assisting in an act of terrorism.  They were also found guilty of involvement in three earlier bomb attacks in 2005 and 2008, which together injured more than 100 people.

The Occupy London sites at St Paul’s Cathedral and Finsbury Square remain in place with the number of protesters present remaining fairly consistent.  The majority of peaceful demonstrators from the St Paul’s camp appear to have moved on to the other camps.  Demonstrations originating from the camp have decreased and lacked the support and momentum of earlier actions.

There are now three ‘Occupations’ by activists in or near the City of London.  As the worldwide Occupy movement shows no sign of abating, it is likely that activists aspire to identify other locations to occupy, especially those they identify capitalism.  City of London Police has received a number of hostile reconnaissance reports concerning individuals who would fit the anti-capitalist profile.

All are asked to be vigilant regarding suspected reconnaissance, particularly around  empty buildings.  Any signs of access or new markings should also be reported.  You may encounter an increase in persons filming for the purpose of national or activist media.  All are  reminded that any encounters with suspected activists could be recorded and then uploaded or live-streamed to the internet.

Intelligence suggests that urban explorers are holding a discussion at the Sun Street squat.  This may lead to an increase in urban exploration activity at abandoned or high profile sites in the capital.

Suspected hostile reconnaissance should be reported to the City of London Police immediately.

Climate Justice Collective, 3 December
‘Stand Up for Climate Justice’ is holding a vigil on the bank of the Thames from 11.30pm to 1.00am Friday Night, as well as climate prayers at 11.30am Saturday morning at St. Mary Le Bow church, Cheapside.

Saturday continues with a ‘Walk of Shame’ past alleged environmental and economic justice offenders along with a ‘teach-out’. This meets at St Paul’s at 10.30am, and is followed by a march to Parliament, meeting at Blackfriars Bridge at 12.00pm. Around 2.30pm the march will congregate outside Parliament. The event is planned to finish around 3.30pm.

The Canary Wharf Experience, 6 December
Occupy London will meet at St Paul’s around 4.15opm, from which they will attend and ‘tour’ Canary Wharf.

Electrician’s Strike, 7 December
Electricians will be takingindustrial action at Balfour Beatty sites across the country.

SHAC ‘Santa SHAC Supplier Shakedown week of action’, 5-11 December
Stop Huntingdon Animal Cruelty has advertised a week of action between these dates. It is expected that SHAC protesters will visit the customary targets during the period.

Ensure that your own security arrangements are adequate and robust at all times. Report any suspicious activity to Police immediately. 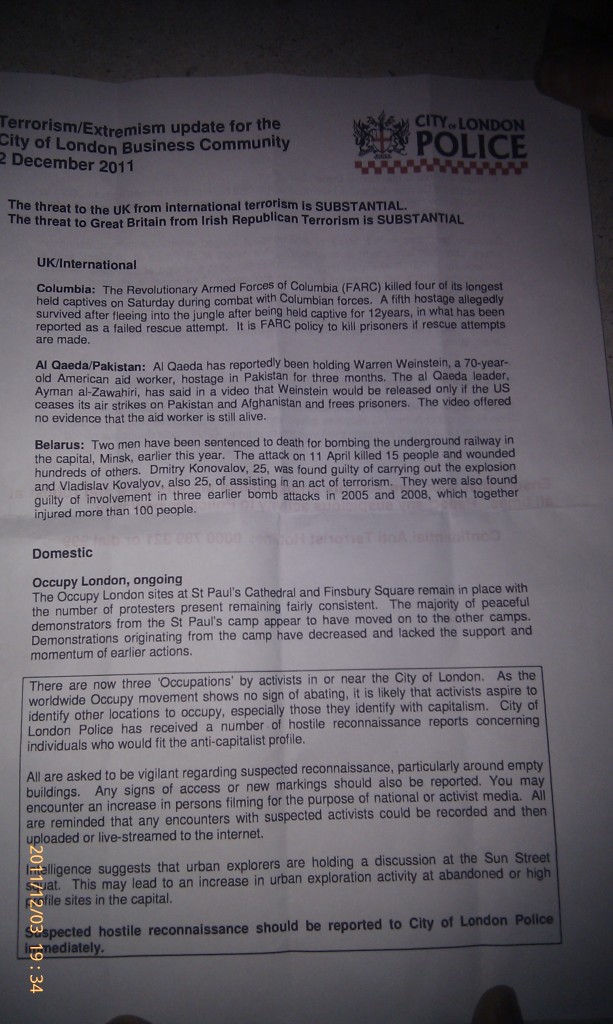 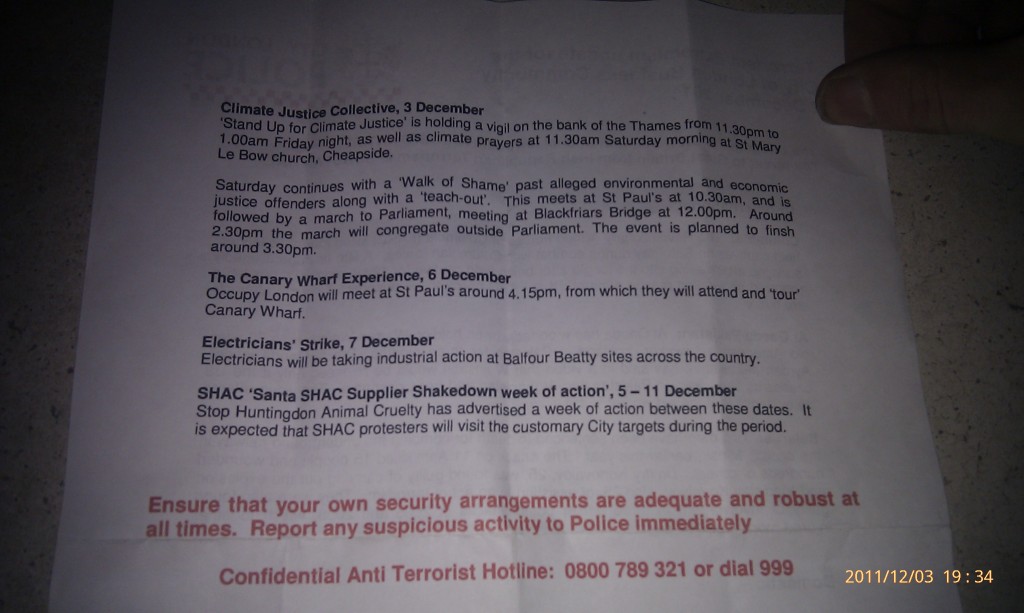