The following document was released by NATO’s Combined Joint Operations from the Sea Centre of Excellence in July 2012. 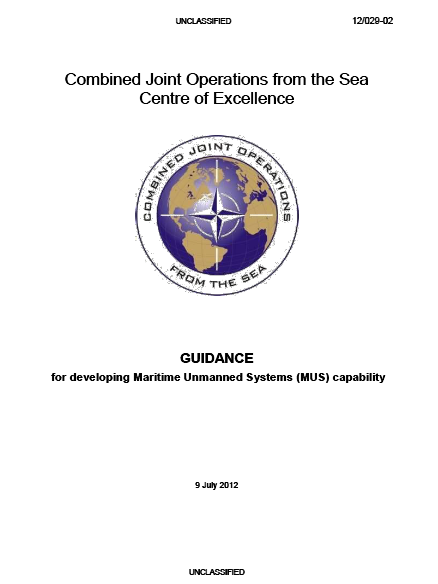 Combined Joint Operations from the Sea Centre of Excellence

In 2008, recognizing a nascent requirement in the maritime security domain, CJOS COE was requested by NATO Allied Command Transformation (ACT) to provide an overall picture of Maritime Unmanned Systems (MUS) as a potential new capability, with a view to create an increased awareness and trigger further developments within the Alliance. The resulting MUS Study, published in November 2009, was then forwarded for endorsement by ACT, to the International Military Staff (IMS). Following this first document, CJOS COE has produced the attached Guidance document building on the initial study and aiming at supporting NATO MUS capability development.

This guidance aims to inform the capability development of Maritime Unmanned Systems (MUS), broadening beyond that currently being exploited by UAV into Unmanned Underwater Vehicles (UUV) and Underwater Surface Vehicles (USV). It covers likely attributes and tasks for MUS, and discusses some of the challenges in developing this capability.

An MUS is defined as an Unmanned System operating in the maritime environment (subsurface, surface, air) whose primary component is at least one unmanned vehicle. A UUV is defined as a self-propelled submersible whose operation is either fully autonomous (pre-programmed or real-time adaptive mission control) or under minimal supervisory control. They are further sub-divided in 4 vehicles classes (man-portable, Light Weight Vehicle (LWV) Heavy Weight Vehicle (HWV), Large Vehicle Class (LVC).

An USV is defined as a self-propelled surface vehicle whose operation is either fully autonomous (pre-programmed or real-time adaptive mission control) or under minimal supervisory control. They are further sub-divided in 4 vehicles classes (X-Class, Harbour Class, Snorkeler Class, Fleet Class).

The areas for MUS to contribute to naval needs derive from their operational advantages, which include: autonomy, risk reduction, deployability, environmental adaptability and persistence.

Nine areas are identified where UUVs can support or conduct a mission:

The missions that could be executed by a USV are:

Based on today‘s capability, future advances in technology will enhance endurance, processing, autonomy, and interoperability. Many of the missions are demanding in terms of autonomy and propulsion. Achieving the level of autonomous intelligence collection required for persistent capabilities will be challenging. Autonomous modes of operation and the technology required to shift from one level of autonomous operation to another are still under development, many shortfalls have been pointed out in the area of engagement/intervention.

UUVs have a limited ability to communicate with the outside world and the use of UUVs, in particular for CN3, requires considerable electrical power for transmissions.

Cyber defense challenges include threats to the MUS vehicle itself, and its feeds and products. A careful balance between the level of autonomy achieved and the vulnerability to cyber attack will need to be developed.

It is considered that the realm of MUS has a lot to offer, increasing operational effectiveness, reducing risk to human life and moreover represents a potential to reduce operational costs.While the greatest cost-effectiveness could be achieved by agreeing to a set of common platforms and command and control systems for such vehicles, ongoing Research and Development (R&D) will still drive future trends in MUS technology. Each nation will need to procure onboard sensors and other payloads according to their own requirements. To date, surface and subsurface MUS capabilities have received much less R&D attention and funding than Unmanned Aerial Vehicles (UAV) and require capital investment to catch up. There is also less data available from which to conduct comparisons of operational effectiveness between manned and unmanned platforms. However, such surface and subsurface capabilities should compliment existing and emerging UAVs to ensure that NATO can effectively counter the wide range of emerging threats in the maritime environment.