This proposal by Washington-based lobbyist firm Clark Lytle Geduldig Cranford offering to provide a response to the Occupy Wall Street protests for the American Bankers Association was originally obtained and published by MSNBC. 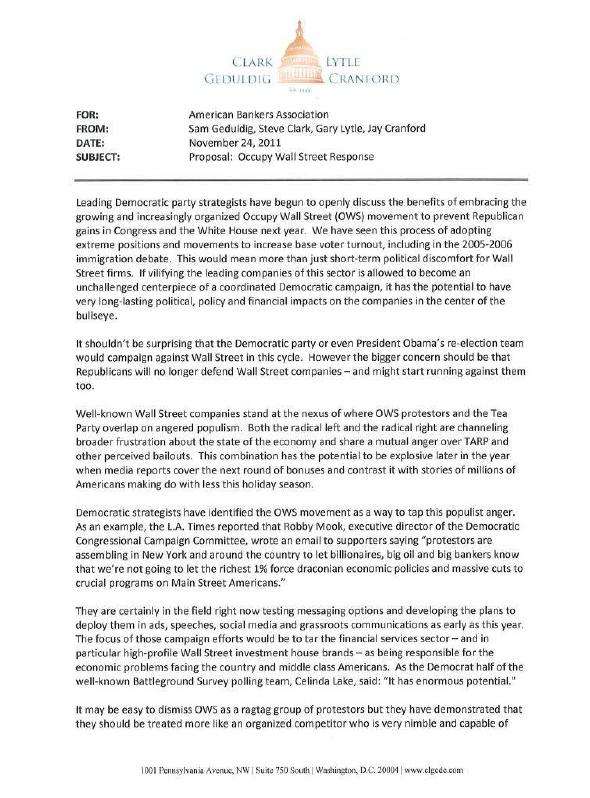 Leading Democratic party strategists have begun to openly discuss the benefits of embracing the growing and increasingly organized Occupy Wall Street (OWS) movement to prevent Republican gains in Congress and the White House next year. We have seen this process of adopting extreme positions and movements to increase base voter turnout, including in the 2005-2006 immigration debate. This would mean more than just short-term political discomfort for Wall Street firms. If vilifying the leading companies of this sector is allowed to become an unchallenged centerpiece of a coordinated Democratic campaign, it has the potential to have very long-lasting political, policy and financial impacts on the companies in the center of the bullseye.

It shouldn’t be surprising that the Democratic party or even President Obama’s re-election team would campaign against Wall Street in this cycle. However the bigger concern should be that Republicans will no longer defend Wall Street companies- and might start running against them too.

Well-known Wall Street companies stand at the nexus of where OWS protestors and the Tea Party overlap on angered populism. Both the radical left and t he radical right are channeling broader frustration about the state of the economy and share a mutual anger over TARP and other perceived bailouts. This combination has the potential to be explosive later in the year when media reports cover the next round of bonuses and contrast it with stories of millions of Americans making do with less this holiday season.

Democratic strategists have identified the OWS movement as a way to tap this populist anger. As an example, the L.A. Times reported that Robby Mook, executive director of the Democratic Congressional Campaign Committee, wrote an email to supporters saying “protestors are assembling in New York and around the country to let billionaires, big oil and big bankers know that we’re not going to let the richest 1% force draconian economic policies and massive cuts to crucial programs on Main Street Americans.”

They are certainly in the field right now testing messaging options and developing the plans to deploy them in ads, speeches, social media and grassroots communications as early as this year. The focus of those campaign efforts would be to tar the financial services sector- and in particular high-profile Wall Street investment house brands-as being responsible for the economic problems facing the country and middle class Americans. As the Democrat half of the well-known Battleground Survey polling team, Celinda Lake, said: “It has enormous potential.” It may be easy to dismiss OWS as a ragtag group of protestors but they have demonstrated that they should be treated more like an organized competitor who is very nimble and capable of working the media, coordinating third party support and engaging office holders to do their
bidding. To counter that, we have to do the same. Putting the cornerstone elements of a plan in place right now will prepare firms to respond quickly and collectively at the earliest and most influential point when embracing OWS goes from concept planning to execution. The cornerstone elements of a plan include: survey research and message testing, opposition research, targeted social media monitoring, coalition planning, and advertising creative and placement strategy development.

The transparency of social media platforms offers an excellent opportunity to anticipate future OWS tactics and messaging as well as identify extreme language and ideas that put its most ardent supporters at odds with mainstream Americans. These platforms may not be a place where engaging OWS supporters directly could be successful but with sophisticated monitoring and analytical tactics it could provide exceptional political intelligence.

Deliverable: We will conduct and report on an audit of most active social media platforms used by OWS with the identification of trends in their engagement. This audit will offer analysis of those trends and identify effective reporting tools to develop actionable intelligence that could be rapidly acted on when a campaign becomes fully operational.

This initial effort to develop the cornerstone elements of a strategic campaign is achievable within 60 days and would best provide you with a range of effective response options if the move to adopt OWS continues on its current path. The cost of the deliverables identified above is $850,000.