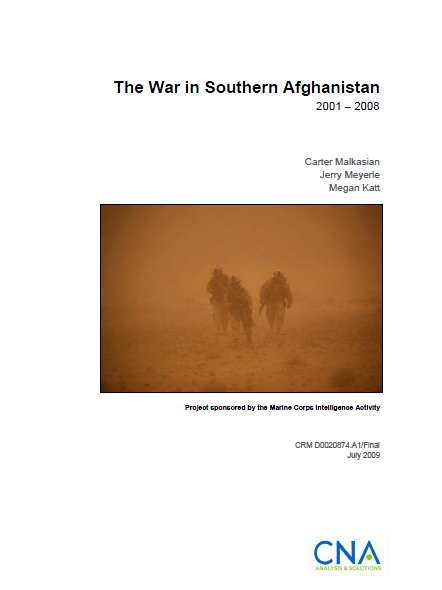 If the study has any single argument it is that government misrule has been a driving factor behind the continuing violence in southern and western Afghanistan. The Afghan government favored warlords, handicapped competent governors, took part in the poppy trade, and allowed the police to abuse the people. Scarcity of security forces and collateral damage from Coalition operations did not help either. Yet above all, we find it unlikely that the instability in southern and western Afghanistan today could have been averted without addressing government misrule.

The study is divided into 3 sections:

• The first section looks at the history of the fighting in southern Afghanistan from 2001 to 2006, when few Coalition forces were in the area. The focus is upon Helmand and Kandahar.

• The second section looks at the history of the fighting in southern Afghanistan from 2006 to 2008, a period of intense violence when Coalition reinforcements tried to hold back the Taliban tide. Again, the focus is upon Helmand and Kandahar, although we do cover events the western province of Farah.

• The third section looks at the history of the fighting in Farah province in detail.

Please also note the index at the end of the study, which hopefully enables Marines to lookup topics of interest quickly.

Southern Afghanistan has always been the heart of the Taliban. It is where the Taliban originated and from where they conquered the vast majority of the country. It is now the main battlefield of the war in Afghanistan. Since 2006, the Taliban have held Kandahar, Afghanistan’s second city, under threat. If they succeed in wresting it from the Afghan government, the state of Afghanistan will be dealt a crippling blow; perhaps a mortal one. How did it come to this? After a supposedly crushing defeat at the hands of the Northern Alliance and United States, how did the Taliban all but regain control of the south? This paper attempts to answer that question, focusing on the period from 2002 to the middle of 2006. A second paper will look at how the Afghan government and Coalition have tried to push back the Taliban since the middle of 2006.

The key points from this section are:

• The resurgence of the Taliban in southern Afghanistan is largely due to a US and Afghan policy of backing warlords. The policy of working with warlords from certain tribes resulted in the exclusion of other tribes.
• The Taliban won over the allegiance of these marginalized tribes as well as other marginalized groups.
• With new tribal allies and a cut of the poppy trade, the Taliban were able to marshal sufficient resources to take on the government.
• Poppy eradication increased local opposition to the government.
• The government could not rally enough popular support to defeat the Taliban.
• The scarcity of Coalition forces allowed the Taliban to openly challenge the government but better government policies could have stopped the Taliban from having any popular or tribal support in the first place.

The Marine Corps Intelligence Activity sponsored this research. The conclusions herein do not necessarily represent the position of the United States Marine Corps.

Some Coalition operations, including air strikes in prosecution of the high value targeting campaign, may have had a negative impact. In 2008, there were 2,118 civilian casualties reported throughout Afghanistan, an increase from the 1,523 reported in 2007. Nearly 900, 41 percent of the 2008 total, occurred in the south. While 567 of those casualties in the south were caused by insurgents, more attention was drawn to the 274 deaths caused by Coalition forces.

Casualties caused by Coalition military operations were often cited in the press as a reason for declining popular support with the Afghan people. Polls backed up these reports. Support of the US military throughout the country steadily declined, from 78 percent of respondents in 2006 to 71 percent in 2007 and 63 percent in 2009. Air strikes were particularly criticized, even by President Karzai. In a 2009 poll, 77 percent of respondents said that air strikes were unacceptable in fighting the Taliban because they endangered too many civilians. US forces began to rely heavily on air strikes once operational restrictions were lifted in 2005. In just six months during 2006, the United States conducted more than 2,000 air strikes throughout Afghanistan, with a particular focus on southern Afghanistan.

The Taliban exploited the effects of the air strikes. Following Hezbollah’s example, the Taliban provided aid for airstrike victims’ families, enabling them to “garner support in the southern provinces.” The United States has since attempted to mirror that strategy. One reason why casualties caused by Coalition military operations tended to receive criticism is that the Taliban were faster at releasing information (often fabricated). The Coalition used an anachronistic approach in which public messages had to go through several layers of bureaucracy to be approved for accuracy before being signed off for release. As a special operations officer observed, “the Taliban’s ‘message is out on the street within hours,’ while the coalition is still ‘trying to get ground truth … The first with the most news has established the agenda and everybody else’s after that is just kind of secondary.’”

Does this mean the war is unwinnable? That assessment cannot be made at this point. There is simply not enough information. The situation is not bad enough to say that defeat is inevitable, or even highly likely. Too many counterinsurgencies have fallen apart only after the military situation became far worse; the South Vietnamese in 1974 or the Soviets in Afghanistan in 1988, for example. Of course, other counterinsurgencies have been defeated under far better conditions; the French in Algeria in 1960, the Rhodesians in 1980, for example. It is common to say that the safe haven in Pakistan will make counterinsurgency very difficult, if not impossible. Yet insurgencies in Iraq, Colombia, and Oman were all dealt serious blows in spite of the existence of a nearby safe haven. All this can only leave us undecided. Perhaps if Kandahar was about to fall, Coalition outposts were being overrun, and insurgents were moving on Kabul, or if mass protests were breaking out across the United States, we could say with some certainty that the war is lost. But that is not the case today. The counterinsurgency is difficult but is not necessarily doomed to defeat.

So what insights does history give us about the way ahead? A narrative history such as this cannot truly recommend the right strategy but it can certainly help inform strategy. First, it is hard to read the history and not leave with the impression that more forces would be useful. The ease with which the Taliban returned to the south, the besieging of the British and Canadian forces in their lonely outposts, the travails of Musa Qala, and Taliban shadow government all stem partly from a scarcity of forces.

Second, any strategy ought to consider how the Coalition can improve its counterinsurgency techniques. The Coalition took too many years to get to the holding and building and the advisory effort necessary for success. Even today collateral damage remains a major concern. Our air strikes and house searches may be offending potential allies and pushing them into the arms of the Taliban.

Finally, it is hard to see how lasting success will be achieved without addressing government misrule. Fixing abusive, corrupt, and biased government leaders and police is no easy task. But it is not impossible. Advisors can mentor. Money can be used to induce better behavior. Bad leaders can be removed. Good leaders can be promoted. Local government bodies can be restructured. Nothing underlies the rise of the insurgency in southern and western Afghanistan as much as government misrule.

These insights may sound negative. To an extent they are, but there is cause for optimism. For if the difficulties in Afghanistan come partly from our own mistakes, or those of the Afghan government, then better decisions may be able to improve the situation. Victory is not assured. Neither is defeat.