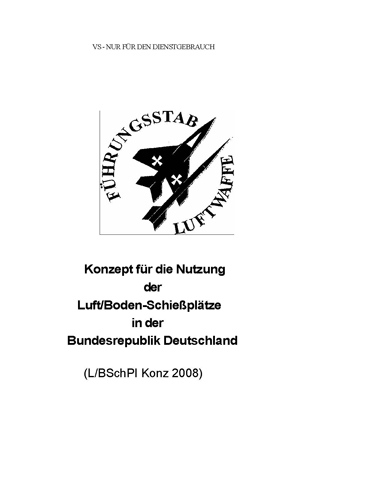 This shows the need and the training opportunities in the DEU for air-ground gunnery training of air attack forces of the Bundeswehr and NATO forces and resources in conjunction with the ground-based air defenses and ground forces on. The concept takes into account the structural changes in the Bundeswehr into account and is aligned with current and foreseeable Einsatzszenaren modern armed forces. The concept is necessary to adapt to unforeseen future developments and update accordingly as circumstances require.

The air strike forces of the Bundeswehr and NATO must be able to fulfill its mandate in close cooperation with other air and land and naval forces too.

Based on the Defense Policy Guidelines are subject to the flying units of the Luftwaffe in the context of multinational commitments (eg for the NATO Response Force – NRF), the highest part of preparedness and availability requirements. Only through continuous and realistic educating and practicing the use of different roles and weapons control procedures in challenging and complex scenarios in daily operations, the required high level of readiness and rapid deployment capability of the aircrews can be maintained.

This use concept takes into account three main objectives:

– Ensure the preparation necessary to use high-quality training in the core area of tactical response training,
Adjustment of the qualitative and quantitative requirements for the use of practice facilities to the changing environment, in particular the need for continuous and realistic training and practice of different roles and use of weapons control procedures in demanding and complex operational scenarios and
– Balanced geographical distribution of the practice of air-to-ground operating procedures related stress, particularly noise pollution,

The determination of the need for Übungs-/Ausbildungseinrichtungen under this use concept is long term and with the proviso that find all possible factors concerning abwägbaren defense mission, operating procedures, arming of the fighter fleet, airspace structure, environmental constraints and political imperatives of a fair burden-sharing account.

Due to the conversion of some of the units of the Luftwaffe bombing of weapon (WaSys) TORNADO on WaSys EUROFIGHTER from 2009, with continual changes in the composition of the air vehicle fleet by 2017 will change starting in the years from 2008 to 2017, the demand L / BSchPl missions accordingly. The concrete definition of robust figures for planning limits and expected actual use is thus possible only for the time of capture of the target structure. The target structure of the Air Force are planning to present from the year 2017 a total of 177 EUROFIGHTER R (partly as a multi-role capable fighter aircraft) are available, are provided according to current plans, of which 70 primary for the air-ground role. In addition, carry up to 36 more EUROFIGHTER in the training of air-to-ground missions. In addition, 85 TORNADO for use against ground targets with unguided and / or-controlled ejection of ammunition and the gun will be capable.

The need for L / Lw BSchPl inserts into the DEU is derived from the air-vehicle fleet, the number of aircrews, from the NATO for the weapons qualification standards set, the training program fliegertaktischen of Lw and the evidence in terms of Bereitschaftsstufen demand for continuous education. The needs of the partner nations to L / B SchPl inserts in ENG, evidence from the recent usage figures as well as the scope and role of the future air vehicle fleet using the affected partner nations derive sufficiently resilient.

Compared to ensure the ability to use dropping unguided munitions, which are preserved in the first instance by the frequent practice of standard procedures with the use of blank ammunition will be (quantity) requires the preservation of the right to use-directed munitions abstandsfähiger practicing complex operational procedures in various tactical scenarios (quality). Current deployment scenarios show that these procedures must be practiced especially in combination with the land forces and with the ground-based air defense forces and resources.

It would also appear as a result of technical development and the evolution of networked operations management for the future, the trend towards high-quality training scenarios, with a resulting need for suitable training areas.

2. Current Use and Condition Description

In the DEU, the L / BSchPl NORDHORN and SIEGENBURG be used for the practice of standard operating procedures with blank ammunition. The use of the L / BSchPl WITTSTOCK who has met the only L / ENG BSchPl in the conditions for practicing procedures on the whole spectrum of use of tactical air combat and in conjunction with ground forces, is currently carrying out the judgments of the Administrative Court of Potsdam
prohibited the proposals of the MoD for approval of an appeal against the judgments were granted.

Also be used by the Air Force and the air forces of partner nations to a limited extent and in close coordination with ground forces as the primary benefit of military training areas BERGEN, MUNSTER, Heuberger, Grafenwoehr, BAUMHOLDER, Klietz and OBERLAUSITZ.

The use is only in the context of spare capacity available. It is further subject to the restrictions that only certain tactical procedures and these can be limited durchgefühlt with exercises and live ammunition. In none of these places, it is possible to perform the entire range of training exercises.

Within the German territorial waters of the shooting area is east of the island COMPLAINTS (ED-D 47) used for shooting at moving sea targets.