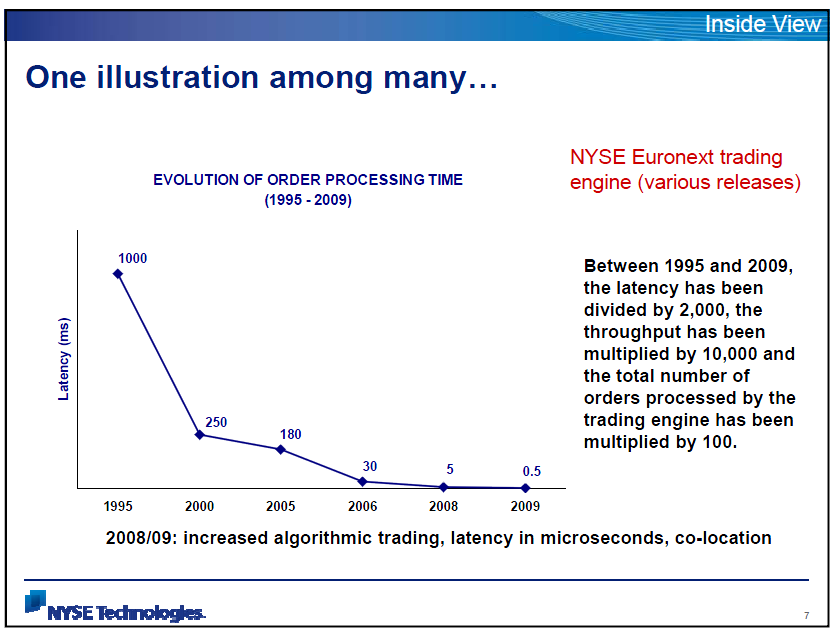 A presentation slide documents the continuous increases in the speed of order processing over time.

Last week’s historic stock market plunge, in which the Dow Jones Industrial Average fell nearly 1,000 points in a matter of minutes, has led to increased scrutiny of so-called “high-frequency trading” systems and their effect upon market prices.  “High-frequency trading” involves the use of computerized systems to place large amounts of orders that are processed within fractions of a second to exploit minute shifts in the price of securities.  A number of electronic trading markets have come under particular scrutiny, including the New York Stock Exchange Euronext and Nasdaq OMX Group.  Executives from both of these exchanges are set to meet with the Securities and Exchange Commission today to discuss how “conflicting trading rules” may have contributed to last Thursday’s dramatic decline.

Amidst these circumstances, Public Intelligence has discovered a presentation brief produced by NYSE Euronext on the website of a financial services conference hosted by the Union of Arab Stock Exchanges that describes the company’s high-frequency trading systems and boasts about their speed.  The brief is titled “TECHNOLOGY SONG AND DANCE: Exchanges dancing faster and faster… But who plays the music?” and is described as being “confidential”, though it is freely reproduced on the conference’s website.  It was presented by Eric Bertrand, Principal Exchange Business Strategy Consultant for NYSE Euronext in November 2009 and discusses a number of key aspects regarding the speed of NYSE Euronext’s trade processing.  Hyping the ever-increasing speed of computerized trading systems and high-volume, high-frequency trading, the presentation makes a selling point of some of the very same market factors that led to last week’s drop.  This mentality may be surmised by reading the brief’s introductory quote from Charles Prince, the former CEO of Citigroup, “When the music stops, things will be complicated. But as long as the music is playing, you’ve got to get up and dance. We’re still dancing…”

The brief describes the evolution of NYSE’s order processing over time. In 1995, trades through the NYSE reportedly took 1000 milliseconds to be processed. As of 2009, trades reportedly required only 0.5 milliseconds. The brief states that between “1995 and 2009, the latency has been divided by 2,000, the throughput has been multiplied by 10,000 and the total number of orders processed by the trading engine has been multiplied by 100”.

One slide, labeled “Fast and Furious” states that the “market structure that prevails today is clearly ‘speed-and-price-obsessed'”, adding that “High-Frequency Trading (HFT) is the most prevalent feature of today’s global markets and has emerged as THE driving force in trading markets over the last decade. It encompasses a variety of trading strategies with extraordinarily high turnover and need for extremely fast, high-capacity market-data feeds and trade-matching engines” (emphasis in original).

High-frequency trading firms are described as  placing “thousands of orders simultaneously, only to cancel the bulk of these and replace them with another set” within fractions of a second.  According to the brief, high-frequency trading accounts for approximately 70% of the volume on US equities and lies in the hands of about 2% of the 20,000 or so trading firms operating in the U.S. 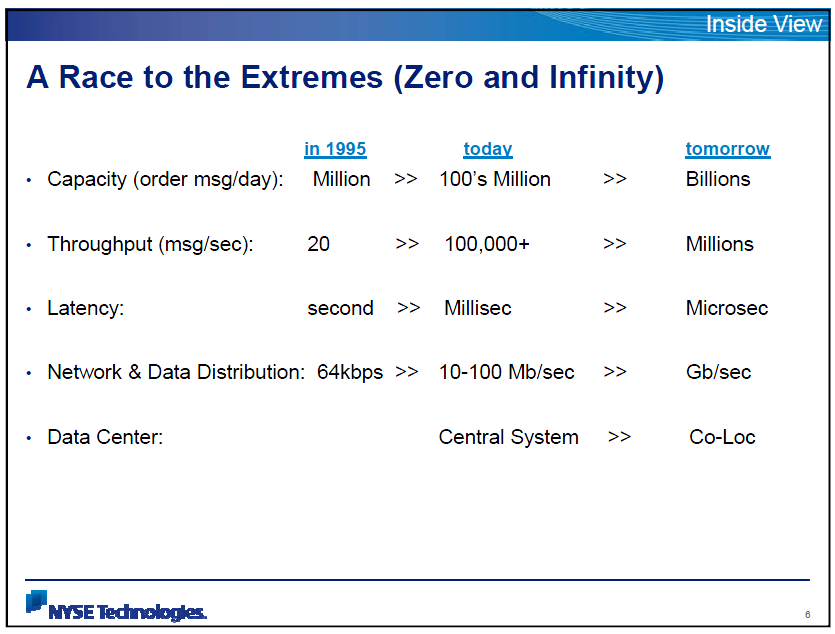 A slide describes the increases in trading speeds since 1995.

Following the events of last Thursday, many people have expressed worries about that the influence of high-frequency trading in global markets.  Chris Dodd, the Chairman of the Senate Banking Committee, told CBS’ Bob Schieffer on Sunday that high-frequency trading is a sign that Wall Street today “is getting detached from the real economy”. According to Dodd, these automated trading platforms that can make trades in microseconds not only put the small investors at a disadvantage but also help feed a “casino environment.”

In an column titled “Growth of electronic trading a major cause of stock market free fall”, the Los Angeles Times’ Michael Hiltzik writes “Although it still isn’t clear what caused Thursday’s bedlam, we can identify generally where to look. The most obvious place is in the explosive growth of ‘high-frequency trading,’ in which traders use computer algorithms to pump billions of dollars in orders onto exchanges in milliseconds. If there are glitches or manipulative aspects to any of those trades, they may be nothing but a puff of electronic smoke before anyone catches them.”

One area that is particularly worrisome is the ability of high-frequency trading systems to limit cataclysmic declines, like the one that occurred last Thursday.  According to the New York Times’ DealBook blog edited by Andrew Ross Sorkin:

Many firms have computers that are programmed to automatically place buy or sell orders based on a variety of things that happen in the markets. Some of the simplest triggers are set off when a stock drops or rises a certain percent in the trading day, or when an index moves a specific amount.

Some circuit breakers do exist, a legacy of the reforms made following the 1987 stock market crash, but they only kick in after a huge drop — and only at certain hours. Before 2 p.m., a 10 percent drop in the Dow causes New York Stock Exchange to halt trading for one hour. Between 2 p.m. and 2:30 p.m., the pause shrinks to a half-hour and after 2:30, there is no halt in trading.

Concerns about the speed of high-frequency trade processing are further exacerbated by the fact that the NYSE presentation specifically stipulates increases in speed in future years.  In a slide labeled “A Race to Extremes”, the brief describes that trading is currently conducted at speeds of 10-100 Mb/sec with a latency of milliseconds.  In the future, NYSE hopes to conduct trades at speeds of Gb/sec with a latency of microseconds.  The brief also states that NYSE is moving towards co-location of server equipment, reducing speeds even further.