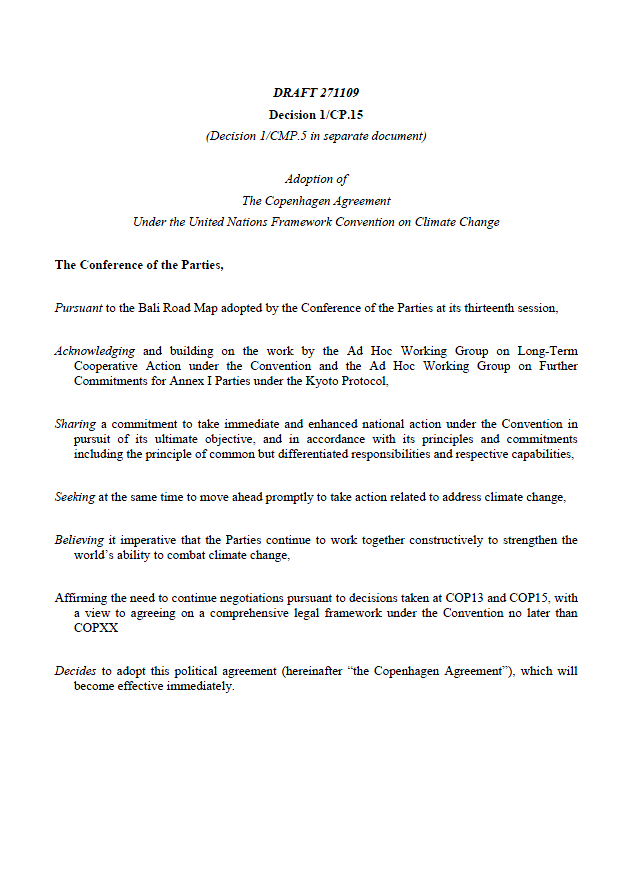 I. A Shared Vision for Long-Term Cooperative Action

2. The Parties underline that climate change is one of the greatest challenges of our time and commit to a vigorous response through immediate ambitious national action and strengthened international cooperation with a view to limit global average temperature rise to a maximum of 2 degrees above pre-industrial levels. The Parties are convinced of the need to address climate change bearing in mind that social and economic development and poverty eradication
are the first and overriding priorities in developing countries. The Parties note that the largest share of historical global emissions of greenhouse gases originates in developed countries, and
that per capita emissions in many developing countries are still relatively low. The Parties
recognize the urgency of addressing the need for enhanced action on adaptation to climate
change. They are equally convinced that moving to a low-emission economy is an opportunity
to promote continued economic growth and sustainable development in all countries
recognizing that gender equality is essential in achieving sustainable development. In this
regard, the Parties:

– Commit to take action to mitigate climate change based on their common but
differentiated responsibilities and respective capabilities,

– Commit to take action on adaptation including international support assisting the poorest
and most vulnerable countries,

– Commit to strengthen the international architecture for the provision of substantially
increased finance for climate efforts in developing countries,

– Commit to establish a technology mechanism to promote the development, transfer and
deployment of environmentally sustainable technologies in support of mitigation and
adaptation efforts.

Welcoming the significance of the commitments on all Bali Building blocks reflected in this
Agreement, the Parties emphasize the need for full implementation, both domestically and
internationally, take note of the additional efforts being taken, and planned, by the Parties,
such as cooperative efforts regarding transformational and other technologies; and encourage
each other to take appropriate additional steps.

3. Recalling the ultimate objective of the Convention, the Parties stress the urgency of action on
both mitigation and adaptation and recognize the scientific view that the increase in global
average temperature above pre-industrial levels ought not to exceed 2 degrees C. In this
regard, the Parties:

– Support the goal of a peak of global emissions as soon as possible, but no later than
[2020], acknowledging that developed countries collectively have peaked and that the
timeframe for peaking will be longer in developing countries,

4. The adverse effects of climate change are already taking place and are posing a serious threat
to the social and economic development of all countries. This is particularly true in the most
vulnerable developing countries, which will be disproportionally affected. The adverse impact
of climate change will constitute an additional burden on developing countries´ efforts to
reduce poverty, to attain sustainable development and to achieve the United Nations
Millennium Development Goals. Both adaptation and mitigation efforts are fundamental to
the fight against climate change. Adaptation must include action to reduce risk and
vulnerability, taking into account gender equality, and build resilience in order to reduce the
threats, loss and damages to livelihoods and ecosystems from disasters caused by extreme
weather events and from slow-onset events caused by gradual climate change. Recognizing
that the impact of climate change will differ according to regional and national circumstances,
planning and implementation of adaptation actions must be considered in the context of the
social, economic and environmental policies of each country. Adaptation action at national
level will be a country driven process taking into account national development priorities and
plans.

5. In this regard, the Parties endorse the adaptation framework in decision X4/CP.15 with the
objective of reducing vulnerability and building resilience to present and future effects of
climate change through national action and international cooperation. This includes the
provision of finance, technology and capacity building in the immediate, medium and longterm.
Support should be provided with priority for the poorest and most vulnerable countries.
In the context of this Framework institutional arrangements will be established over time to
support Parties’ actions and provide technical assistance including for risk reduction and
provide financial risk transfer such as insurance. Further, this will include a system to ensure
mutual accountability with monitoring, review and assessment of support and actions and
share lessons learned. A share of fast-start financing comprising [$X] for 2010-12 will be
provided through existing channels, including the Adaptation Fund, to implement actions
identified in National Adaptation Programmes of Action and other urgent needs and to build
capacity for further planning.

6. The shared vision limiting global average temperature rise to a maximum of 2 degrees above
pre-industrial levels is addressed by nationally appropriate mitigation contributions to be
carried out by the Parties consistent with the principle of common but differentiated
responsibilities and respective capabilities and with developed countries taking the lead.
Developed Countries nationally appropriate mitigation commitments and actions

7. The developed country Parties commit to individual national economy wide targets for 2020.
The targets in Attachment A would expect to yield aggregate emissions reductions by X1
percent by 2020 versus 1990 (X2 percent vs. 2005). The purchase of international offset
credits will play a supplementary role to domestic action. The developed country Parties support a goal to reduce their emissions of greenhouse gases in aggregate by 80% or more by
2050 versus 1990 (X3 percent versus 2005).

9. The developing country Parties, except the least developed countries which may contribute at
their own discretion, commit to nationally appropriate mitigation actions, including actions
supported and enabled by technology, financing and capacity-building. The developing
countries’ individual mitigation action could in aggregate yield a [Y percent] deviation in
[2020] from business as usual and yielding their collective emissions peak before [20XX] and
decline thereafter.

11. A Registry in the form of a database under UNFCCC is established in order to enable the
international recognition of developing country mitigation action. The Registry shall include
supported mitigation actions that meet agreed MRV specifications and unsupported actions
that are subject to national MRV based on internationally agreed guidelines and a consultative
review under UNFCCC. Developing countries commit to inscribe supported nationally
appropriate mitigation actions in the Registry and indicate the expected emissions outcomes.
Unsupported action shall, except for the least developed countries which may do so at their
own discretion, be inscribed via the National Communications and can be inscribed directly in
the Registry beforehand on a voluntary basis.

19. Substantially scaled up financial resources will be needed to address mitigation, adaptation,
technology and capacity building. It is essential to strengthen the international financial
architecture for assisting the developing countries in dealing with climate change and to
improve access to financial support. Resources will derive from multiple sources and flow
through multiple bilateral and multilateral channels.

20. The Parties share the view that the strengthened financial architecture should be able to handle
gradually scaled up international public support. International public finance support to
developing countries [should/shall] reach the order of [X] billion USD in 2020 on the basis of
appropriate increases in mitigation and adaptation efforts by developing countries.

21. The Parties confirm climate financing committed under this agreement as new and additional
resources that supplement existing international public financial flows otherwise available for
developing countries in support of poverty alleviation and the continued progress towards the
Millennium Development Goals. In this regard:

– From [2013] The Parties commit to regularly review appropriateness of contributions
and the circle of contributors against indicators of fairness based on GDP and emissions
levels and taking into account the level of development as set forth in Attachment C.

22. Recalling article 4 of the Convention, Parties decide that a Climate Fund be established as an
operating entity of the Financial Mechanism of the Convention, which should function under
the guidance of and be accountable to the COP as set forth in article 11 of the Convention.
The Fund should be operated by a board with balanced representation, which will develop the
operational guidelines for the Fund and decide on specific allocation to programmes and
projects. The COP will formally elect members of the Fund Board and endorse the
operational guidelines and modalities for the Fund. The Fund should complement and
maximise global efforts to fight climate change through up-scaled support for climate efforts
in the developing countries, including mitigation, adaptation, technology and capacitybuilding.
Support from the Fund may be channeled through multilateral institutions or directly
to national entities based on agreed criteria. Parties commit to allocate an initial amount of
[$x] to the Fund as part of their international public climate support. Medium term funding should be based on a share of no less than [y%] of the overall international public support.
Parties decide to operationalise the work of the Fund following the modalities set forth in
annex/decision [Y].

23. In the context of the commitment in paragraph [14] Parties commit to global financing
contributions from international aviation and international maritime transport generated
through instruments developed and implemented by the ICAO and IMO respectively should
be channeled through the Climate Fund from [2013], [mainly for adaption purposes], taking
into account the principle of common but differentiated responsibility.

24. To enhance transparency and overview The Parties decide to establish an International
Climate Financing Board under the UNFCCC to monitor and review international financing
for climate action and in this context identify any gaps and imbalances in the international
financing for mitigation and adaptation actions that may arise. The Board will consist of [x]
representatives from developed countries and [y] representatives from developing countries.
[Z] Representatives from international institutions will participate in the Board as permanent
observers. Decision making will be by consensus. [If all efforts to reach a compromise have
been exhausted and no agreement has been reached, decisions shall be taken by a two-thirds
majority]. The UNFCCC Secretariat will serve as secretariat for the International Climate
Financing Board. Parties endorse the further guidelines as set out in attachment D and
decision X7/CP.15.

31. The Parties underline their commitment to immediate action pursuant to this Agreement.
Furthermore, the Parties:

– Decide to continue negotiations pursuant to decisions taken at COP13 and COP15, with a
view to agreeing on a comprehensive legal framework under the Convention no later
than COPXX

– Will keep track of overall efforts with a view to ensure full transparency and allow The
Parties to strengthen their collective commitments and efforts if necessary to deliver in
full towards addressing the climate challenge.

32. The Parties commit to work together in international organizations, including international
financial institutions, to further integrate climate aspects in their activities, including country
reviews. 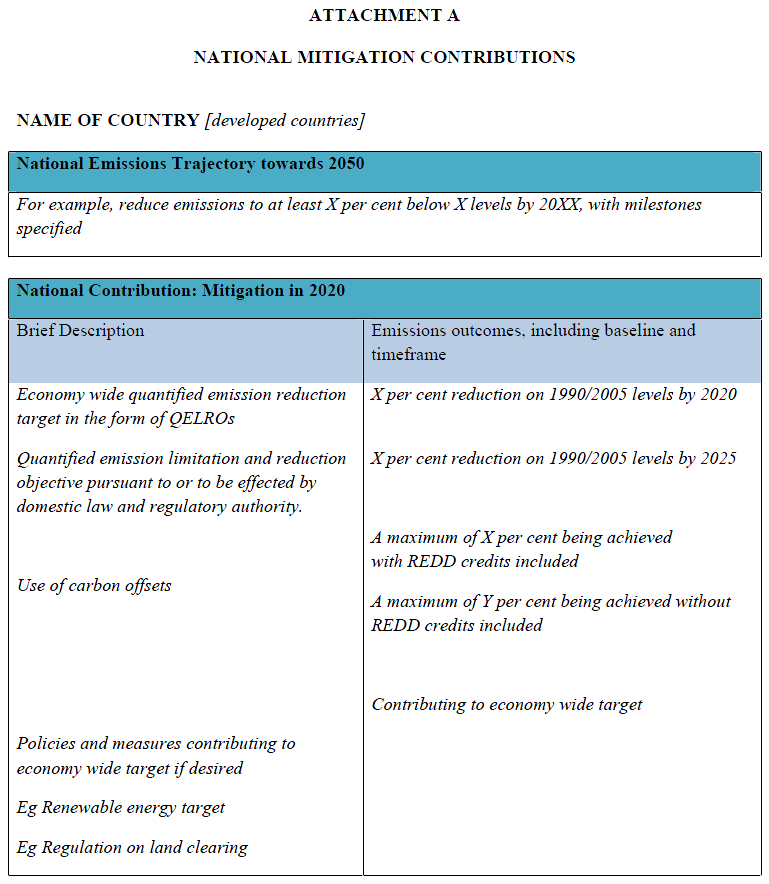