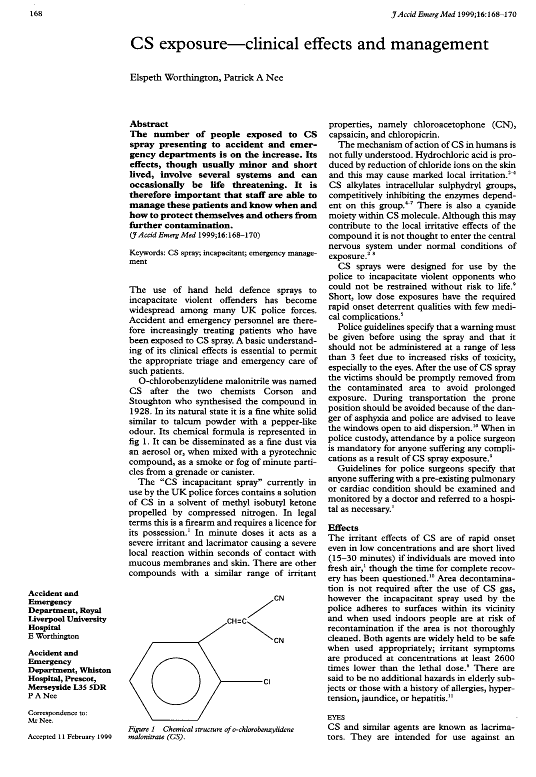 The number of people exposed to CS spray presenting to accident and emergency departments is on the increase. Its effects, though usually minor and short lived, involve several systems and can occasionally be life threatening. It is therefore important that staff are able to manage these patients and know when and how to protect themselves and others from further contamination.

The use of hand held defence sprays to incapacitate violent offenders has become widespread among many UK police forces. Accident and emergency personnel are therefore increasingly treating patients who have been exposed to CS spray. A basic understanding of its clinical effects is essential to permit the appropriate triage and emergency care of such patients.

O-chlorobenzylidene malonitrile was named CS after the two chemists Corson and Stoughton who synthesised the compound in 1928. In its natural state it is a fine white solid similar to talcum powder with a pepper-like odour. Its chemical formula is represented in fig 1. It can be disseminated as a fine dust via an aerosol or, when mixed with a pyrotechnic compound, as a smoke or fog of minute particles from a grenade or canister.

The “CS incapacitant spray” currently in use by the UK police forces contains a solution of CS in a solvent of methyl isobutyl ketone propelled by compressed nitrogen. In legal terms this is a firearm and requires a licence for its possession.’ In minute doses it acts as a severe irritant and lacrimator causing a severe local reaction within seconds of contact with mucous membranes and skin. There are other compounds with a similar range of irritant properties, namely chloroacetophone (CN), capsaicin, and chloropicrin.

The mechanism of action of CS in humans is not fully understood. Hydrochloric acid is produced by reduction of chloride ions on the skin and this may cause marked local irritation.” CS alkylates intracellular sulphydryl groups, competitively inhibiting the enzymes dependent on this group.”‘ There is also a cyanide moiety within CS molecule. Although this may contribute to the local irritative effects of the compound it is not thought to enter the central nervous system under normal conditions of exposure.

CS sprays were designed for use by the police to incapacitate violent opponents who could not be restrained without risk to life. Short, low dose exposures have the required rapid onset deterrent qualities with few medical complications.

Police guidelines specify that a warning must be given before using the spray and that it should not be administered at a range of less than 3 feet due to increased risks of toxicity, especially to the eyes. After the use of CS spray the victims should be promptly removed from the contaminated area to avoid prolonged exposure. During transportation the prone position should be avoided because of the danger of asphyxia and police are advised to leave the windows open to aid dispersion. When in police custody, attendance by a police surgeon is mandatory for anyone suffering any complications as a result of CS spray exposure.

Guidelines for police surgeons specify that anyone suffering with a pre-existing pulmonary or cardiac condition should be examined and monitored by a doctor and referred to a hospital as necessary.