The following report was released January 15, 2013 by the Combating Terrorism Center at Westpoint. 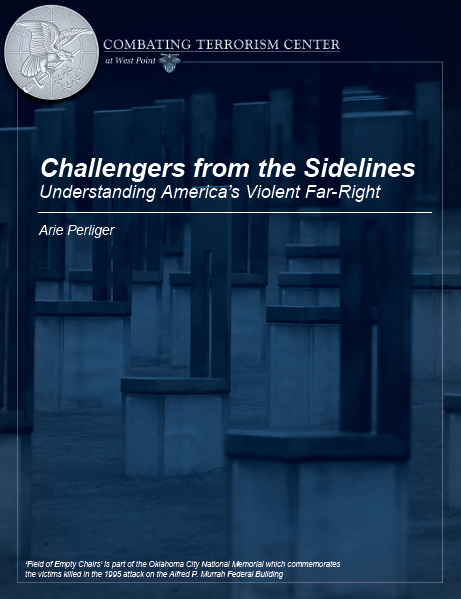 In the last few years, and especially since 2007, there has been a dramatic rise in the number of attacks and violent plots originating from individuals and groups who self-identify with the far-right of American politics. These incidents cause many to wonder whether these are isolated attacks, an increasing trend, part of increasing societal violence, or attributable to some other condition. To date, however, there has been limited systematic documentation and analysis of incidents of American domestic violence.

This study provides a conceptual foundation for understanding different far-right groups and then presents the empirical analysis of violent incidents to identify those perpetrating attacks and their associated trends. Through a comprehensive look at the data, this study addresses three core questions:

(1) What are the main current characteristics of the violence produced by the far right?

(3) What are the social and political factors associated with the level of far-right violence? Are there political or social conditions that foster or discourage violence?
It is important to note that this study concentrates on those individuals and groups who have actually perpetuated violence and is not a comprehensive analysis of the political causes with which some far-right extremists identify. While the ability to hold and appropriately articulate diverse political views is an American strength, extremists committing acts of violence in the name of those causes undermine the freedoms that they purport to espouse.

In contrast to the relatively long tradition of the white supremacy racist movement, the anti-federalist movement appeared in full force only in the early to mid-1990s, with the emergence of groups such as the Militia of Montana and the Michigan Militia. Anti-federalism is normally identified in the literature as the “Militia” or “Patriot” movement. Anti-federalist and anti-government sentiments were present in American society before the 1990s in diverse movements and ideological associations promoting anti-taxation, gun rights, survivalist practices, and libertarian ideas. However, most scholars concur that the 1980s “farm crises,” combined with the implications of rapid economic, cultural and technological changes in American society, growing political influences of minority groups, and attempts to revise gun control and environmental legislation, facilitated the rapid emergence of a cohesive movement in the mid to late 1990s. In other words, the militia movement was a reactive social movement which mobilized in response to specific perceived threats.

The anti-federalist movement’s ideology is based on the idea that there is an urgent need to undermine the influence, legitimacy and practical sovereignty of the federal government and its proxy organizations. The groups comprising the movement suggest several rationales that seek to legitimize anti-federal sentiments. Some groups are driven by a strong conviction that the American political system and its proxies were hijacked by external forces interested in promoting a “New World Order,” (NWO) in which the United States will be embedded in the UN or another version of global government. The NWO will be advanced, they believe, via steady transition of powers from local to federal law-enforcement agencies, i.e., the transformation of local police and law-enforcement agencies into a federally controlled “National Police” agency that will in turn merge with a “Multi-National Peace Keeping Force.” The latter deployment on US soil will be justified via a domestic campaign implemented by interested parties that will emphasize American society’s deficiencies and US government incompetency. This will convince the American people that restoring stability and order inevitably demands the use of international forces. The last stage, according to most NWO narratives, involves the transformation of the United States government into an international/world government and the execution and oppression of those opposing this process. Linda Thompson, the head of the Unorganized Militia of the United States details the consequence of this global coup: ”This is the coming of the New World Order. A one-world government, where, in order to put the new government in place, we must all be disarmed first. To do that, the government is deliberately creating schisms in our society, funding both the anti-abortion/pro-choice sides, the antigun/pro-gun issues…trying to provoke a riot that will allow martial law to be implemented and all weapons seized, while ‘dissidents’ are put safely away”. The fear of the materialization of the NWO makes most militias not merely hostile towards the federal government but also hostile towards international organizations, whether non-profitable NGOs, international corporations, or political institutions of the international community, such as the UN.

The militias’ anti-federalist sentiments are also rationalized by their perception of the corrupted and tyrannical nature of the federal government and its apparent tendency to violate individuals’ civilian liberties and constitutional rights. That is why they are concerned about the transformation of the United States into a police state in which power is used arbitrarily and without accountability. In the words of a Missouri Militia member, “One of the things that people really fear from the government is the idea that the government can ruin your life; totally destroy your life….split your family up, do the whole thing and walk off like you’re a discarded banana peel, and with a ho-hum attitude.”

In the context of violation of constitutional rights, militia members in particular tend to point out the steady increase in gun control and environmental legislation and the overregulation of the economic and social realms, especially in regard to immigration and education issues. The opposition to gun control legislation has been driven mainly by the perception of many that this represents a breach of the Second Amendment and a direct violation of a constitutional right, having direct impact on the ability of many to preserve their common practices and way of life. In contrast, the opposition to environmental legislation has been driven by the economic consequences of this legislation, as perceived by the militia members, in particular the decline of industries which are not environmentally friendly but crucial for the economy in rural areas. The Testimony of Susan Schock reveals the resulting frustration, clearly expressed in the words of Charles Shumway, Arizona Militia member: “Unless the ‘curse’ of the Endangered Species Act was repealed, there would be ‘rioting, bloodshed, rebellion and conflict that will make the Serbian-Bosnia affair look like a Sunday picnic.’”

Finally, many of the militias also legitimize their ideological tendencies by referring to the strong role of civilian activism, civilian paramilitary groups, individual freedoms, and self-governing and frontier culture in America’s history and ethos, especially during the Revolutionary War and the expansion to the West. Hence, members of these groups see themselves as the successors of the nation’s founding fathers, and as part of a struggle to restore or preserve what they regard as America’s true identity, values and way of life.

To conclude, it should be noted that historically some of the anti-federalist groups have absorbed racist and Christian Identity sentiments; nonetheless, the glue binding their membership and driving their activism has been and remains hostility, fear and the need to challenge or restrict the sovereignty of the federal government.