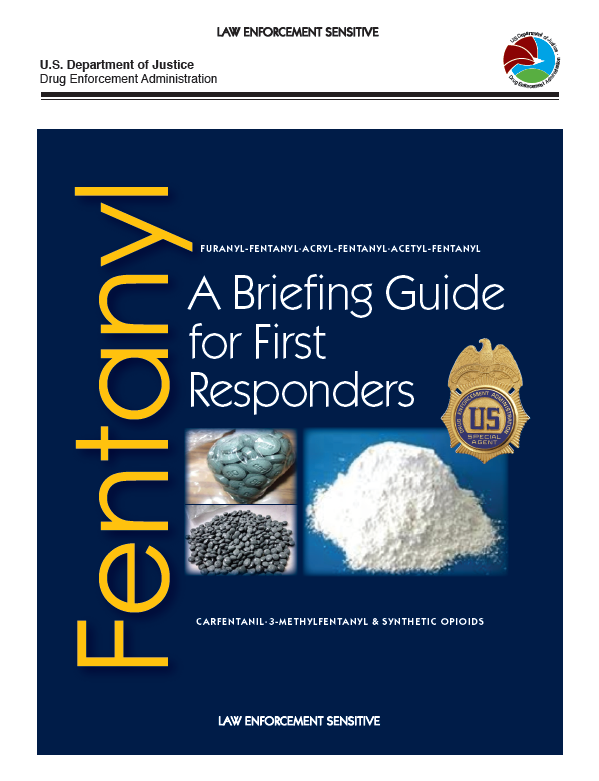 In the last several years, U.S. Law Enforcement has seen a dramatic increase in the availability of dangerous synthetic opioids. A large majority of these synthetic opioids are structural derivatives of the synthetic drug “fentanyl.” Fentanyl is a synthetic opioid currently listed as a Schedule II prescription drug that mimics the effects of morphine in the human body, but has potency 50–100 times that of morphine. Due to the high potency and availability of fentanyl, both transnational and domestic criminal organizations are increasingly utilizing these dangerous synthetic opioids as an adulterant in heroin and other controlled substances. The presence of these synthetic opioids in the illicit U.S. drug market is extremely concerning as the potency of these drugs has led to a significant increase in overdose incidents and overdose-related deaths throughout the nation.

Fentanyl was first synthesized in 1959 by a Belgian chemist and later marketed as an intravenous analgesic drug, Sublimaze. Other formulations of pharmaceutical (legal) fentanyl were developed to provide opioid pain management including a transdermal patch, flavored lollipop, sublingual/effervescent tab, and nasal spray.

In the 1990’s, the DEA discovered what is believed to be one of the first instances of domestically produced illicit fentanyl in the United States. In 1991 a brand of street heroin known as “Tango and Cash” was found to contain approximately 12 percent fentanyl and was believed to be responsible for an estimated 126 overdose deaths. Investigators were ultimately able to trace this clandestinely produced fentanyl to Wichita, Kansas where they seized two laboratories and approximately 40 pounds of additional fentanyl.

Between 2000 and 2005, U.S. law enforcement agencies identified and dismantled several clandestine fentanyl laboratories located throughout the United States. However, beginning in 2005, law enforcement agencies in the Midwest and Northeast, from Chicago to New Jersey, began noticing an alarming number of overdose deaths in their respective areas. Between 2005 and 2007, approximately 1,013 fentanyl‐related deaths in this corridor were attributed to the lethal heroin/fentanyl mixture. This time, the adulterated heroin was traced to a clandestine laboratory located in Toluca, Mexico which was ultimately seized and dismantled.

Due to the hazardous nature of the synthetic opioids described in this overview, law enforcement personnel, or any first responders, who encounter fentanyl or fentanyl‐related substances should NOT take samples or otherwise disturb any powdered substances without employing proper PPE, as this could lead to accidental exposure.

Further, it is possible that illicit fentanyl or fentanyl‐related substances could be mixed with other drugs or concealed in innocuous devices (such as nasal spray or eye dropper bottles) in varying amounts and purities, thus causing unintentional exposure. Law enforcement personnel, as well as first responders, should exercise appropriate safety precautions at all times when fentanyl or fentanyl‐related substances are suspected.

If the presence of fentanyl or any synthetic opioid is suspected, personnel should immediately contact the appropriate officials within their agency who have been trained to handle hazardous materials, or contact the nearest DEA field office for assistance. Having specially trained law enforcement (or hazardous materials “HAZMAT” incident response team) professionals equipped with the necessary equipment, to include Level “A” PPE, on‐site to assess the situation prior to exposure or contamination is recommended. This includes situations involving unknown powdered substances and/or pill milling or encapsulating operations.

When conducting proactive policing, such as drug or gang investigations, law enforcement personnel should always be mindful of the potential fentanyl threat. Prior to using undercover officers to conduct drug purchases, personnel should attempt to conduct thorough debriefings of any informants or intelligence sources relative to the investigative activity underway as to the potential presence of fentanyl or fentanyl‐related substances.