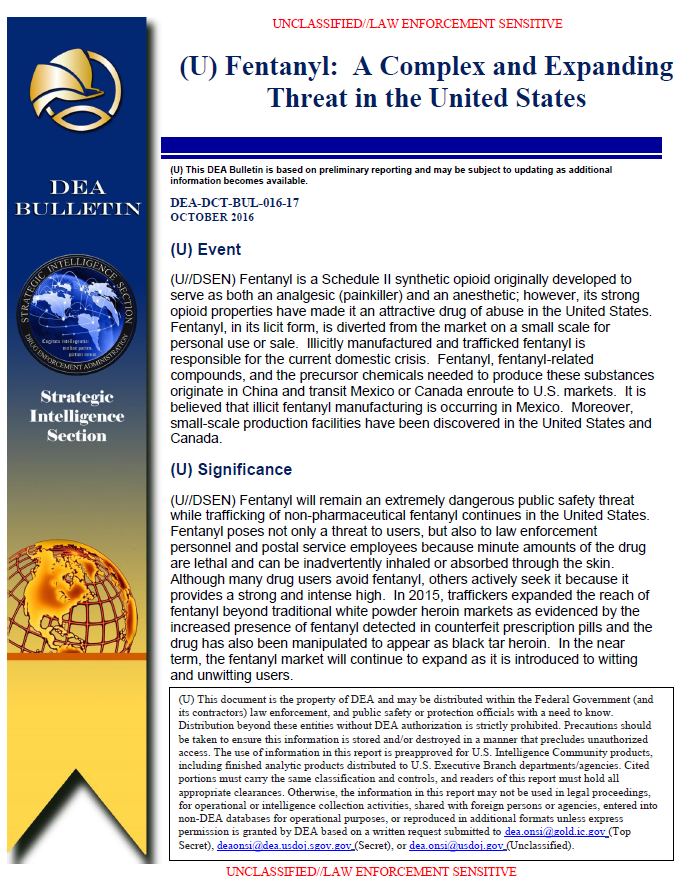 Fentanyl: A Complex and Expanding Threat in the United States

(U//DSEN) Fentanyl is a Schedule II synthetic opioid originally developed to serve as both an analgesic (painkiller) and an anesthetic; however, its strong opioid properties have made it an attractive drug of abuse in the United States. Fentanyl, in its licit form, is diverted from the market on a small scale for personal use or sale. Illicitly manufactured and trafficked fentanyl is responsible for the current domestic crisis. Fentanyl, fentanyl-related compounds, and the precursor chemicals needed to produce these substances originate in China and transit Mexico or Canada enroute to U.S. markets. It is believed that illicit fentanyl manufacturing is occurring in Mexico. Moreover, small-scale production facilities have been discovered in the United States and Canada.

(U//DSEN) Fentanyl will remain an extremely dangerous public safety threat while trafficking of non-pharmaceutical fentanyl continues in the United States. Fentanyl poses not only a threat to users, but also to law enforcement personnel and postal service employees because minute amounts of the drug are lethal and can be inadvertently inhaled or absorbed through the skin. Although many drug users avoid fentanyl, others actively seek it because it provides a strong and intense high. In 2015, traffickers expanded the reach of fentanyl beyond traditional white powder heroin markets as evidenced by the increased presence of fentanyl detected in counterfeit prescription pills and the drug has also been manipulated to appear as black tar heroin. In the near term, the fentanyl market will continue to expand as it is introduced to witting and unwitting users.

(U//DSEN) The map below depicts the number of fentanyl exhibits reported by state during calendar year 2015, according to National Forensic Laboratory Information System (NFLIS).1 The state with the most fentanyl exhibits was Ohio, with 3,861 exhibits. The data reveal that every state had at least one fentanyl exhibit during 2015; however, the largest concentrations are in the same areas with long-standing white powder heroin markets.

(U//DSEN) According to NFLIS data, Figure 2 depicts the amount of fentanyl in grams seized in each state from January 2015 to June 2016. California had the highest total with 172 kilograms seized, followed by Georgia (42 kilograms), New Jersey (40.5 kilograms), Massachusetts (30.8 kilograms), and Ohio (19 kilograms). The elevated seizure amounts in New Jersey, Massachusetts, and Ohio are expected because of the mature heroin markets in these states. The large seizure levels in California and Georgia are the result of smuggling routes, largely associated with the Southwest Border, that transit these states en route to Eastern and Midwestern markets. As a result, large seizures of wholesale (multi-kilogram) amounts of fentanyl have occurred in these states. This is further depicted with the shading in the states of Texas, Oklahoma, Missouri, and Illinois—as illicit manufactured fentanyl enters Texas across the Southwest Border and is smuggled into Midwestern markets.

(U//DSEN) According to NFLIS and National Seizure System (NSS) data, seizures of fentanyl, fentanyl-related compounds, and fentanyl precursor chemicals have continued to increase in the United States during the last two fiscal years (FYs):

(U//DSEN) As of early October 2016, the DEA Special Testing and Research Laboratory (SFL1) has analyzed more than 170 fentanyl or fentanyl-related compound exhibits (162 powders, 9 tablets, and 1 blotter paper) from 92 different seizures. The average purity of bulk fentanyl hydrochloride (HCl) seized at the Southwest Border is approximately 7 percent. The most common diluents or adulterants are lactose, mannitol, and dipyrone. Fentanyl profiling methodologies developed by SFL1 have also revealed the fentanyl precursor chemical 4-ANPP is being clandestinely manufactured, as well as being purchased from commercial vendors.

(U//DSEN) In addition, SFL1 analysis revealed that at least one fentanyl trafficking organization has gained access to film-coating technology to produce film-coated counterfeit M-30 tablets containing fentanyl. M-30 is the logo for Mallinckrodt’s generic 30-milligram oxycodone tablet. The compressed tablets with a single score mark and box logo were well-made and are a counterfeit of the commercial product (see Figure 5). Film-coating technology is a sophisticated commercial process requiring dedicated equipment and a moderate degree of manufacturing technology and methodology experience. Film-coated counterfeit tablets are rarely seen in the controlled substance street market. SFL1 has only seen two or three samples of film-coated counterfeit tablets containing a controlled substance in the last three decades. However, film-coating has become very popular in the legitimate pharmaceutical industry; therefore, used machinery and personnel with knowledge to operate it have become readily available. 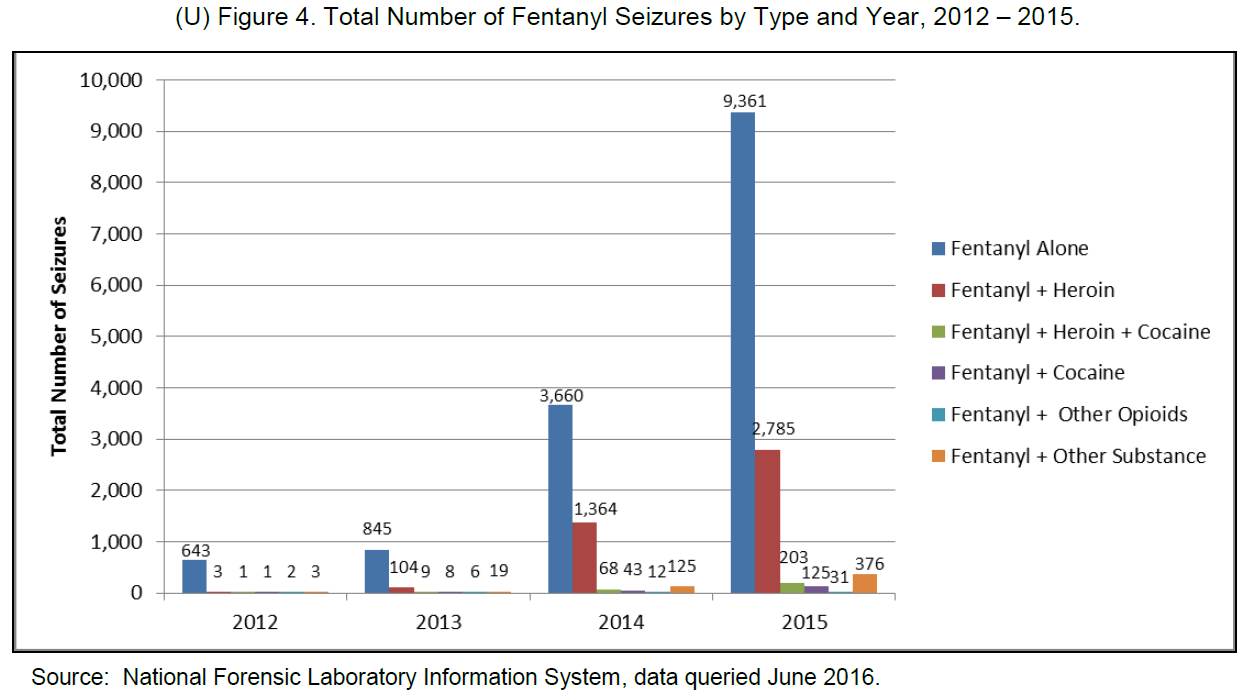