The following study was commissioned by World Business Chicago, the parent organization of the group hosting the upcoming NATO Summit.  The study estimates an injection of $128 million into the local economy of Chicago as a result of the summit.  Economists have questioned the accuracy of these numbers, which do not take into account a number of factors including potential damage to the city as well as widespread business closures in and around downtown Chicago. 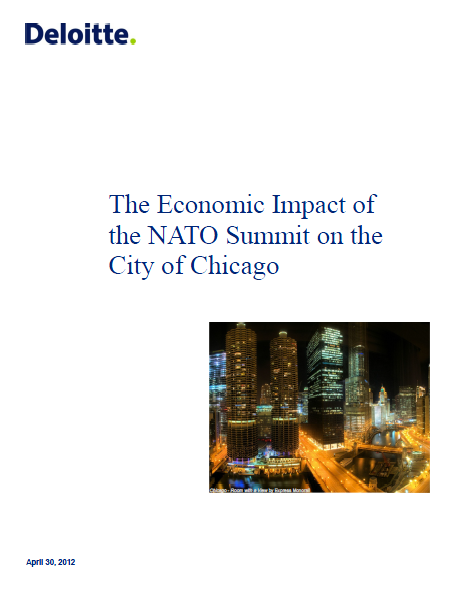 On May 20-21, 2012, Chicago will host the 25th North Atlantic Treaty Organization (NATO) Summit – the first NATO Summit in the U.S. held outside of Washington, DC. Delegations from 28 NATO Member Countries, 24 International Security Assistance Force (ISAF) Partner Countries, and six other nations and international organizations will participate in the Summit. The Summit will bring economic benefits in the form of spending, tax revenues, employment, hotel guests, tourism, and broader global attention. Over 7,500 delegates and 7,300 staff, press, and other dignitaries are expected to attend the Summit. In addition, planning for the Summit prompted visits and spending by delegations during advance trips to Chicago. Building on the momentum of the Summit, many Chicago organizations have planned events that will generate additional economic impacts for the City. These ancillary events are expected to draw thousands of additional speakers, staff, attendees, and members of the media.

The scope of this analysis is limited to the City of Chicago proper, and all impacts described refer to the City and not to the larger Cook County, Chicago Metropolitan Statistical Area, or the State of Illinois.

In addition to the quantitative impacts described in this report, Chicago is likely to experience other, less tangible effects from the Summit. These include immediate and long term international attention, reinforcement of Chicago’s brand as a world class city, and elevation of Chicago’s role as host for future global events. At an international event of this scale, protests or other unscheduled disruptions may also occur, which could result in mixed media attention; however, the value of exposure is difficult to estimate reliably and was not within the scope of this analysis.