This Congressional Research Service report was obtained and originally published by Steven Aftergood of the Federation of American Scientists’ Secrecy News. 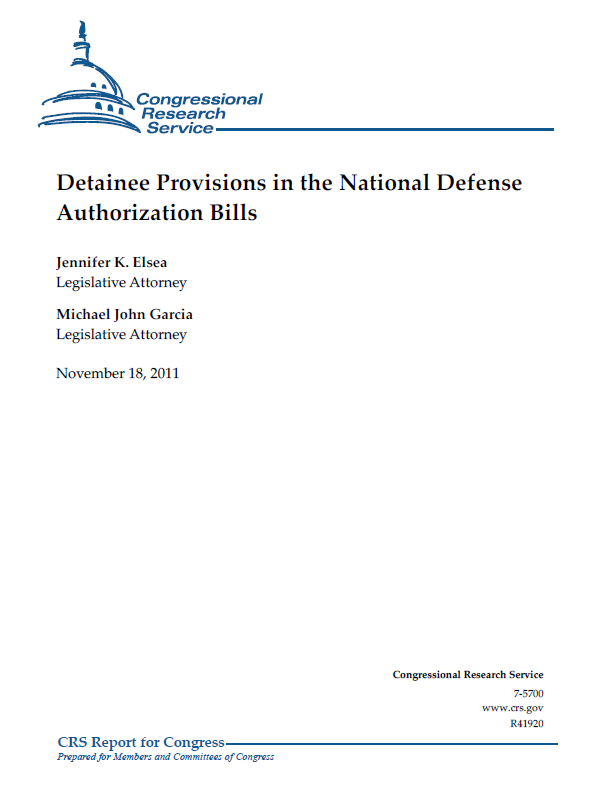 Both House and Senate bills competing to become the National Defense Authorization Act for FY2012 contain a subtitle addressing issues related to detainees at the U.S. Naval Station at Guantanamo Bay, Cuba, and more broadly, hostilities against Al Qaeda and other entities. At the heart of both bills’ detainee provisions appears to be an effort to confirm or, as some observers view it, expand the detention authority that Congress implicitly granted the President via the Authorization for Use of Military Force (AUMF, P.L. 107-40) in the aftermath of the terrorist attacks of September 11, 2001.

H.R. 1540, as passed by the House of Representatives on May 26, 2011, contains provisions that would reaffirm the conflict and define its scope; impose specific restrictions on the transfer of any non-citizen wartime detainee into the United States; place stringent conditions on the transfer or release of any Guantanamo detainee to a foreign country; and require that any foreign national who has engaged in an offense related to a terrorist attack be tried by military commission if jurisdiction exists.

Shortly before H.R. 1540 was approved by the House, the White House issued a statement regarding its provisions. While supportive of most aspects of the bill, it was highly critical of those provisions concerning detainee matters. The Administration voiced strong opposition to the House provision reaffirming the existence of the armed conflict with Al Qaeda and arguably redefining its scope. It threatened to veto any version of the bill that contains provisions that the Administration views as challenging critical executive branch authority, including restrictions on detainee transfers and measures affecting review procedures.

In June, the Senate Armed Services Committee reported its initial version of the bill, S. 1253. The bill included many provisions similar to the House bill, but also included a provision requiring the military detention of certain terrorist suspects. After the White House and the chairs of other Senate committees objected to some of the provisions, Senate Majority Leader Reid delayed consideration of S. 1253 pending a resolution of the disputed language. The Senate Armed Services Committee reported a second version of the authorization bill on November 15, 2011, addressing some, but not all of the concerns. The new bill, S. 1867, would authorize the detention
of certain categories of persons and require the military detention of a subset of them; regulate status determinations for persons held pursuant to the AUMF, regardless of location; regulate periodic review proceedings concerning the continued detention of Guantanamo detainees; and continue current funding restrictions that relate to Guantanamo detainee transfers to foreign countries. Unlike the House bill, the Senate bill would not bar the transfer of detainees into the United States for trial or perhaps for other purposes.

Despite the revisions to the detainee provisions, the Administration threatened to veto “any bill that challenges or constrains the President’s critical authorities to collect intelligence, incapacitate dangerous terrorists, and protect the Nation.”

This report offers a brief background of the salient issues raised by H.R. 1540 and S. 1867 regarding detention matters, provides a section-by-section analysis of the relevant subdivision of each bill, and compares the bills’ approaches with respect to the major issues they address.