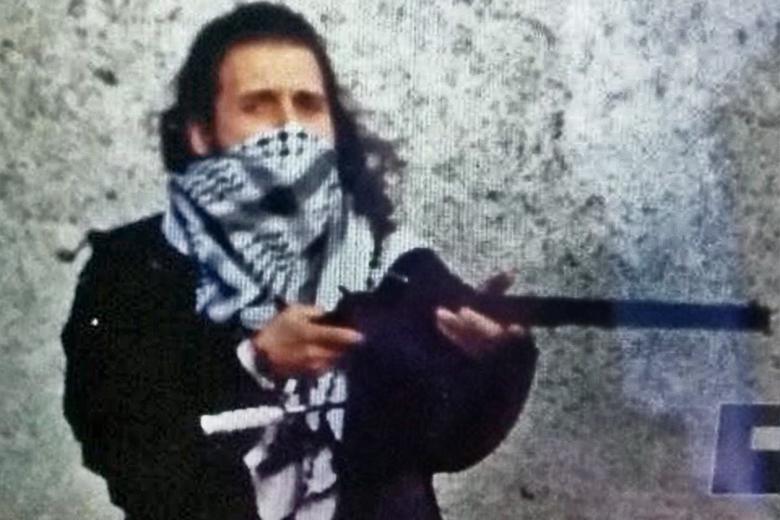 A photo of Michael Zehaf-Bibeau who shot a Canadian solider on October 22, 2014 in an attack on Parliament Hill that was reportedly inspired by Islamic State of Iraq and the Levant (ISIL).  The photo was taken by a tourist at the beginning of Zehaf-Bibeau’s attack.

An intelligence assessment released last month by the Department of Homeland Security’s Office of Intelligence and Analysis found that a domestic terrorist attack conducted by individuals affiliated with or inspired by the Islamic State of Iraq and the Levant (ISIL) would most likely “employ tactics involving edged weapons, small arms, or improvised explosive devices (IEDs).”  The assessment, which was obtained by Public Intelligence, was released in October following several recent attacks conducted in Europe and Australia by individuals sympathetic to ISIL.  Based on a review of these and other planned attacks, analysts at DHS evaluated the tactics and targets, as well as operational security measures employed in order to determine “tactics, targets, and tradecraft that potentially could be used in the Homeland by individuals associated with or inspired” by ISIL.

The assessment concludes that the “most likely perpetrators of a potential ISIL-directed or inspired Homeland attack include individuals acting under the direction of foreign-based terrorists, returning foreign fighters, and those who are inspired by the ongoing conflict in Syria and Iraq but who cannot or will not travel overseas.”  These individuals would likely use “edged weapons, small arms, or improvised explosive devices (IEDs)” to attack targets that provide an “opportunity to successfully execute an attack that would garner media attention.”  For example, recent plots in Europe and Australia have targeted public gatherings, government employees and Jewish facilities.

Several attacks in Europe over the last year have shown the willingness of former ISIL fighters to conduct attacks once they return to their home countries.  In February, a man named Ibrahim Boudina was arrested in France after returning from Syria where he reportedly fought with ISIL.  During a search in Greece, where Boudina had been entering into Europe, authorities discovered a USB drive with instructions on making explosives.  A French-Tunisian friend of Boudina was also arrested in Italy after returning from Syria.  A week after the arrest, members of the French security service reportedly discovered “a handgun, bomb-making instructions, and three soda cans filled with the high-explosive compound TATP” in an apartment complex owned by Boudina’s father.

In May, a French citizen that is believed to have fought with ISIL in Syria shot and killed four people at a Jewish museum in Brussels, Belgium.  When the man was arrested several weeks after the attack, he was found to be in possession of an ISIL flag as well as an automatic rifle that was believed to have been used in the attack. 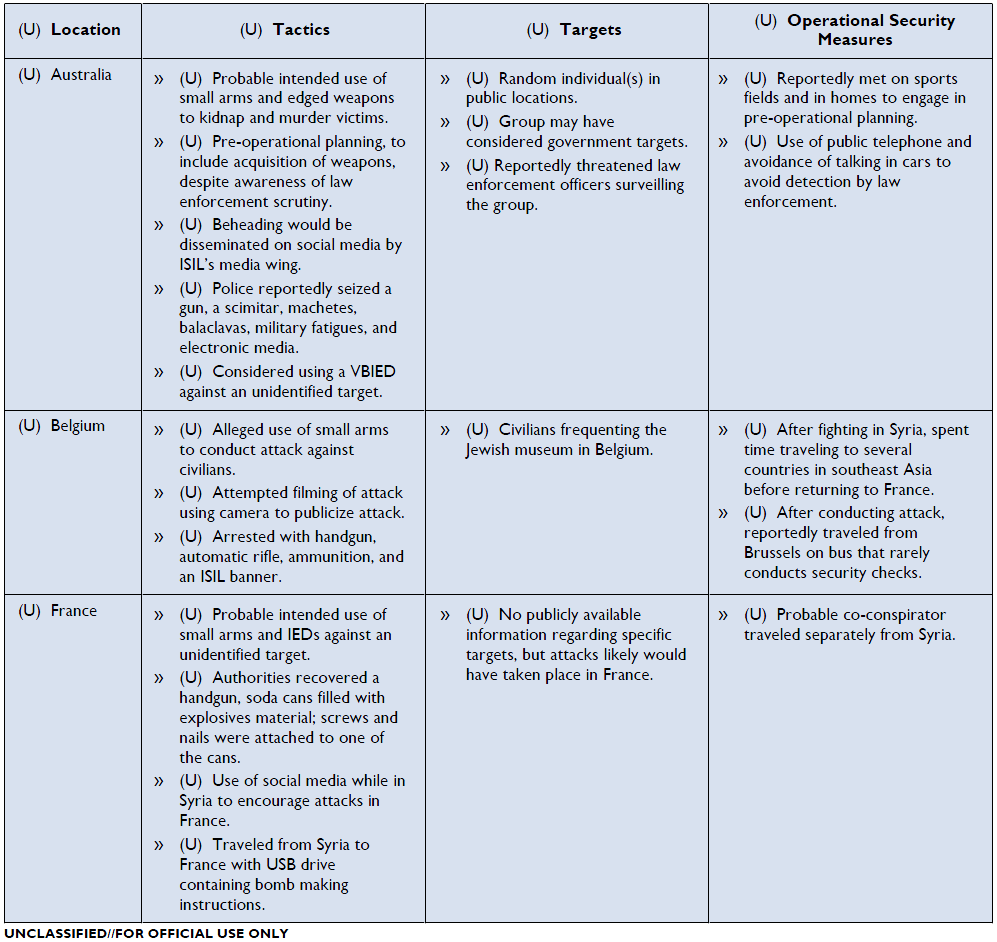 An image from the DHS intelligence assessment released in October highlights various plots in Europe and Australia, providing examples of their tactics and targets as well as operational security measures employed by the attackers.

In September, Australian authorities arrested fifteen individuals suspected of planning to kidnap and behead members of the public on behalf of ISIL.  The plot was allegedly foiled after communications were intercepted between a “Syria-based Australian senior ISIL member and a Sydney-based group member discussing a plot reportedly centered on filming the murders of randomly selected individuals in Sydney, which would then be sent to ISIL’s media wing to disseminate via social media.”  According to the DHS assessment, the plot is an example of the “potential threat posed by individuals who have not traveled to Syria or Iraq, but who maintain contact and take some level of direction from overseas-based ISIL leaders.”

A similar incident mentioned in the assessment also occurred in September when an eighteen-year-old Australian who had publicly expressed his support for ISIL stabbed two police officers after volunteering to meet with counterterrorism task force members as part of an ongoing investigation.  Less than a week after the assessment’s publication by DHS, a Canadian citizen named Michael Zehaf-Bibeau shot a soldier at the Canadian War Memorial in an attack that was reportedly inspired by ISIL and entered a building on Parliament Hill before being shot by police.