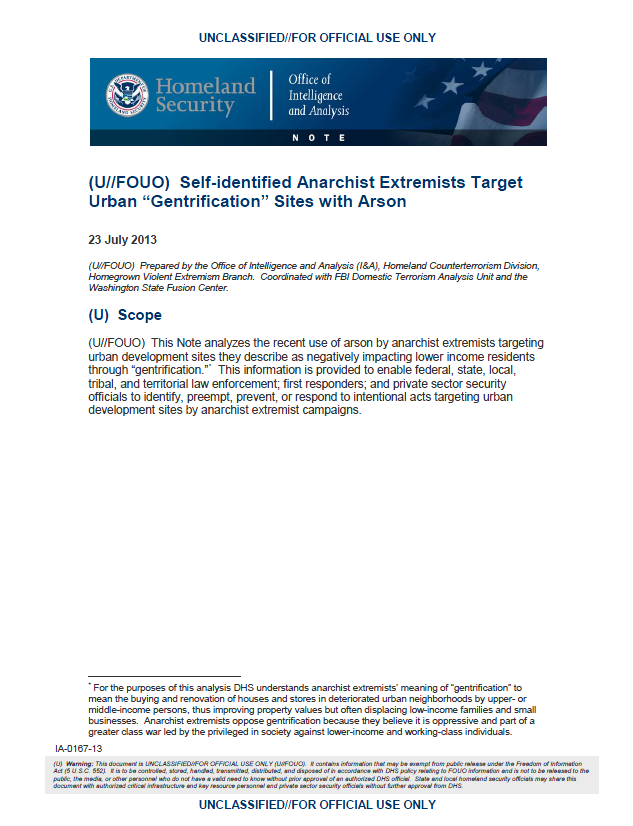 (U//FOUO) We assess the use of arson by anarchist extremists to specifically attack urban development sites they perceive as “gentrification” is an escalation of tactics against this target set and a departure from more traditional targets of violence—symbols of globalization, political and economic summits, corporations, military recruiting offices, and law enforcement. I&A judges that anarchist extremists are likely to replicate this tactic due to their history of sharing tactics, repeating targets, and the relative success of prior attacks. We have moderate confidence in this judgment because the incident information and historical patterns of criminal activity are credibly sourced and plausible even though the number of new cases is limited.

» (U//FOUO) Although environmental rights extremists—with whom anarchist extremists often are associated and express solidarity—historically employed arson at development sites in suburban or rural environments, anarchist extremists in North America rarely have targeted urban development they perceive as “gentrification” with arson. The reasons for this apparent escalation to violence against this target set remain unknown.

(U//FOUO) Individuals or groups claiming to be perpetrators of two recent—but thus far unconnected––attacks in Vancouver, Canada and Seattle, Washington, and a 2011 attack in Grand Rapids, Michigan, cited anarchist extremist beliefs as the basis for their attacks on urban development projects. None of the arsons resulted in injuries; however, the Vancouver fire damaged adjacent homes, highlighting the potential for the tactic to cause unintended death or serious injury.

» (U//FOUO) Individuals calling themselves the “Anti-Gentrification Front” (AGF) in May 2013 claimed credit for setting fire to a construction site for new duplexes in Vancouver. The claim, posted to an anarchist web forum, stated that the attack was motivated by “rising rent costs and gentrification” in Vancouver. No arrests have been made.
» (U//FOUO) Suspected anarchist extremists in February 2013 set fire to a condominium development under construction in Seattle. An anonymous post on an anarchist website took credit for the attack and claimed that they were protesting “gentrification” developments in the city and expressed solidarity with imprisoned anarchists. No arrests have been made.
» (U//FOUO) Individuals set fire to an unfinished condominium in February 2011 in Grand Rapids. A letter claiming responsibility three days later cited “antigentrification” as motivation and threatened additional actions, including robbery, assault, and kidnapping.

(U//FOUO) Each of the three arsons was preceded by lower level criminal activity or mischief involving anarchist or “anti-gentrification” statements, suggesting a deliberate shift by perpetrators toward more violent activities to oppose local urban development efforts. While we remain concerned that the process of escalation from minor criminal acts to more violent activities like arsons could be repeated, it also represents a potential opportunity to interdict or prevent further arsons.

» (U//FOUO) Before the Vancouver arson, the AGF claimed responsibility in online communications for a number of low-level criminal actions, including smashing the windows of a “yuppie” restaurant and Vancouver city trucks; AGF claimed the targets of their attacks supported a specific community plan promoting “gentrification.” These crimes remain unsolved.
» (U//FOUO) According to local media reporting, graffiti critical of development efforts, such as “Gentrification Kills (sic),” appeared in several areas of Seattle during the two years prior to the arson; however, no claims of responsibility for the graffiti or connection to the arson have been made.
» (U//FOUO) The same neighborhood of Grand Rapids that was later targeted by arson first experienced vandalism, including smashed windows and graffiti critical of “gentrification” and anarchist symbols. These low-level crimes occurred on the 25th day of each of the two months preceding the arson, suggesting some connection. No arrests have been made.

(U//FOUO) I&A is actively seeking additional reporting from law enforcement about incidents of anarchist extremists targeting sites they associate with “gentrification.” We have no specific indications of ongoing plotting against targets related to urban development but remain concerned about the potential for further attacks of this nature.

» (U//FOUO) Claims of responsibility have gained publicity among the anarchist extremist community, which could inspire copycat attacks. Law enforcement and first responders should be vigilant for signs of possible preparation for arson, as well as for lesser criminal activity and vandalism by anarchist extremists, which may be indicative of follow-on violent activities.