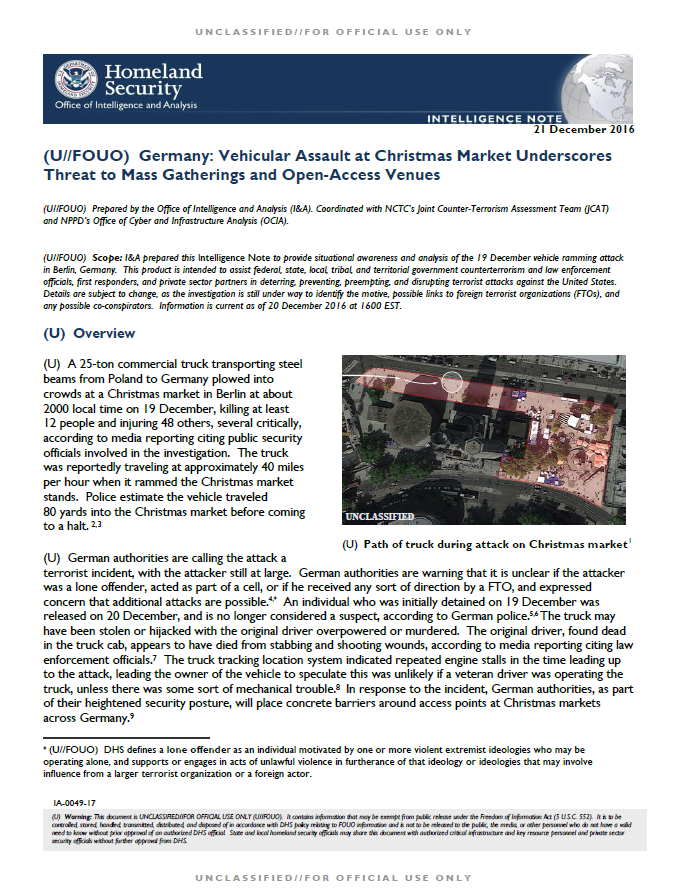 (U) A 25-ton commercial truck transporting steel beams from Poland to Germany plowed into crowds at a Christmas market in Berlin at about 2000 local time on 19 December, killing at least 12 people and injuring 48 others, several critically, according to media reporting citing public security officials involved in the investigation. The truck was reportedly traveling at approximately 40 miles per hour when it rammed the Christmas market stands. Police estimate the vehicle traveled 80 yards into the Christmas market before coming to a halt.

(U) German authorities are calling the attack a terrorist incident, with the attacker still at large. German authorities are warning that it is unclear if the attacker was a lone offender, acted as part of a cell, or if he received any sort of direction by a FTO, and expressed concern that additional attacks are possible. An individual who was initially detained on 19 December was released on 20 December, and is no longer considered a suspect, according to German police. The truck may have been stolen or hijacked with the original driver overpowered or murdered. The original driver, found dead in the truck cab, appears to have died from stabbing and shooting wounds, according to media reporting citing law enforcement officials. The truck tracking location system indicated repeated engine stalls in the time leading up to the attack, leading the owner of the vehicle to speculate this was unlikely if a veteran driver was operating the truck, unless there was some sort of mechanical trouble. In response to the incident, German authorities, as part of their heightened security posture, will place concrete barriers around access points at Christmas markets across Germany.

(U//FOUO) I&A assesses that the 19 December likely terrorist attack at one of the largest Christmas markets in Berlin highlights terrorists’ continued use of simple tactics and is consistent with recent calls by the self-proclaimed Islamic State of Iraq and the Levant (ISIL) for attacks in the West using “all available means.” In an early December audio statement, ISIL spokesman Abu Hassan al-Muhajir called for attacks in “their homes, markets, street gatherings and anywhere they do not think of.” Vehicle ramming has been featured in recent violent extremist publications and messaging—including in ISIL’s al Rumiyah magazine and al-Qaʻida in the Arabian Peninsula’s (AQAP) Inspire magazine—especially since the mid-July vehicle ramming attack in Nice, France. The early-November third issue of Rumiyah highlighted applicable targets for vehicle ramming attacks such as “large outdoor conventions and celebrations, pedestrian-congested streets, outdoor markets, festivals, parades, and political rallies.” The most recent Homeland attack featuring this tactic occurred at Ohio State University in Columbus on 28 November, where Abdul Razak Ali Artan ran over pedestrians and then continued the attack with an edged weapon after the vehicle came to a stop.

(U//FOUO) On 20 December, ISIL’s A’maq News Agency called the attacker “an Islamic State soldier” consistent with previous instances of quickly posting claims of credit for operations. While the attack bears the hallmarks of ISIL’s tactics and targets, we have not been able to determine a definitive link to the group at this time.

(U//FOUO) I&A has no information indicating a specific or credible threat against individuals, locations or events in the Homeland, but several recent plots and attacks in the United States and overseas involving shopping malls, mass transit, and mass gatherings, including sporting events, have shown that homegrown violent extremists (HVEs) and terrorist groups are interested in attacking these types of targets. I&A assesses that commercial facilities—such as festivals, concerts, outdoor events, and other mass gatherings—remain a potential target for terrorists or HVEs, as they often pursue simple, achievable attacks with an emphasis on economic impact and mass casualties. The most likely tactics in a hypothetical terrorist attack against such events likely would involve edged weapons, small arms, vehicular assaults, and possibly improvised explosive devices. The 19 December events underscore the difficulties the private sector and law enforcement face in securing venues that are pedestrian-friendly, particularly in light of the large number of such areas.