The following document is part of a series produced by the Department of Homeland Security's Office of Cyber and Infrastructure Analysis (OCIA) on failing infrastructure.  Though they do not bear any protective markings, the documents are not released publicly. 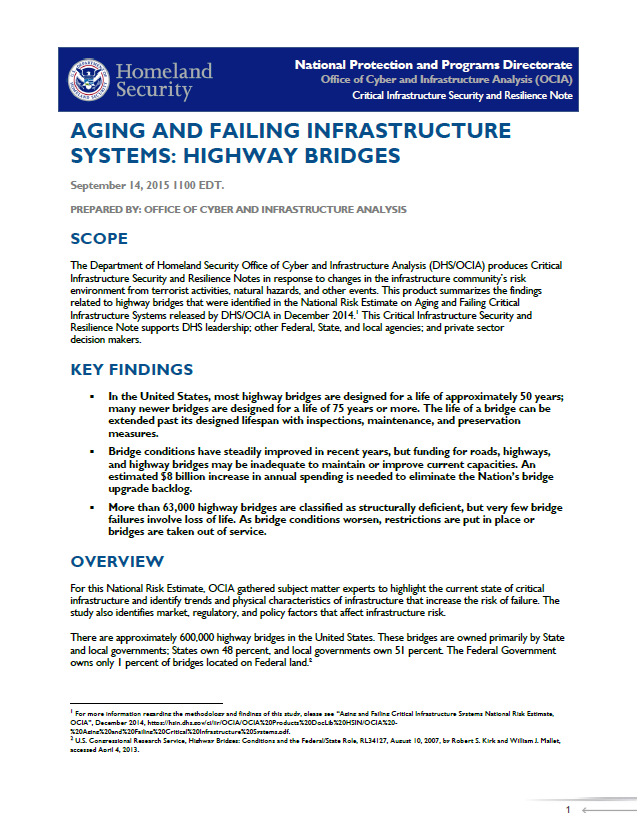 Bridge conditions have steadily improved in recent years, but funding for roads, highways, and highway bridges may be inadequate to maintain or improve current capacities. An estimated $8 billion increase in annual spending is needed to eliminate the Nation’s bridge upgrade backlog.

More than 63,000 highway bridges are classified as structurally deficient, but very few bridge failures involve loss of life. As bridge conditions worsen, restrictions are put in place or bridges are taken out of service.

The Federal Highway Administration (FHWA) maintains the National Bridge Inspection Program, aimed at ensuring bridge safety, and maintains the National Bridge Inventory (NBI), which includes information on bridge conditions. Bridges identified as structurally deficient may have decks, superstructures, or substructures determined to be in poor condition. Bridges identified as functionally obsolete do not meet current design standards and may be too narrow, have insufficient load-carrying capabilities, or do not meet other standards. These ratings are used to determine whether a highway bridge is eligible for the Highway Bridge Replacement and Rehabilitation Program. The condition of bridges has steadily improved in recent years, but as of December 2013, NBI reported that 63,000 bridges were still identified as structurally deficient, and an additional 84,000 were functionally obsolete.

Structurally deficient and functionally obsolete bridges are not inherently unsafe, but may require additional maintenance or restrictions on speed, vehicle size and load, and the number of vehicles permitted. These restrictions can increase traffic or require some vehicles to use different routes, increasing travel time and distance, and increasing fuel consumption. If structurally deficient and functionally obsolete bridges become unsafe, they are taken out of service, with economic consequences.

As bridges age, their likelihood for failure increases because the most common causes of bridge failure, erosion and scouring, are time-dependent. Other time-dependent causes of failure are material fatigue and corrosion. Commercial vehicles traveling over bridges can induce material fatigue. Rates of corrosion can increase in salt water or acidic soils. Extreme weather and natural disasters, such as hurricanes, floods, droughts, earthquakes, tornados, and other natural events can also damage bridges. Bridges suffering from scour, fatigue, or corrosion are more likely to be affected by extreme weather and natural disasters.