The following document is part of a series produced by the Department of Homeland Security's Office of Cyber and Infrastructure Analysis (OCIA) on failing infrastructure. Though they do not bear any protective markings, the documents are not released publicly. 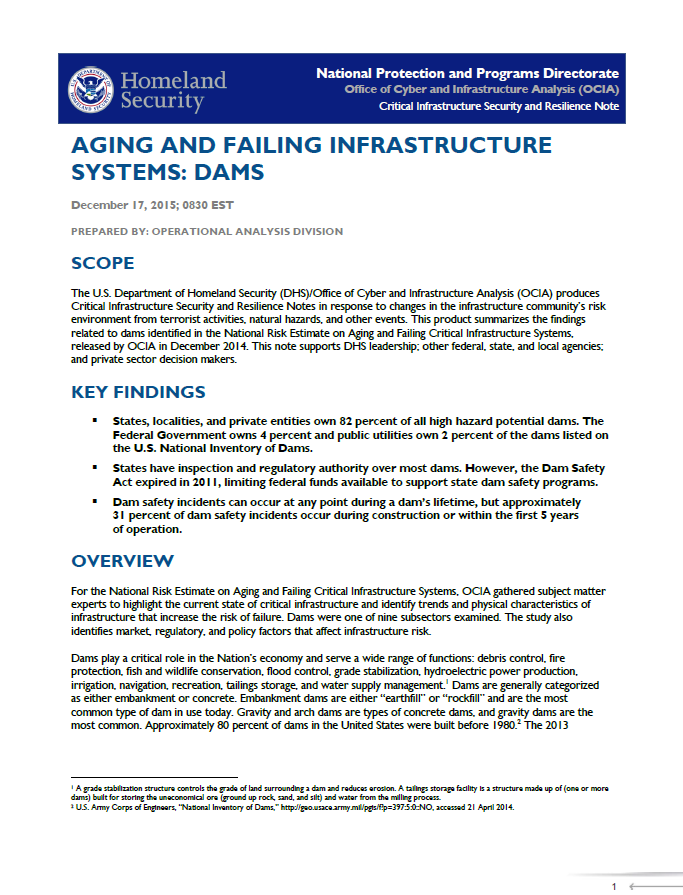 The U.S. Department of Homeland Security (DHS)/Office of Cyber and Infrastructure Analysis (OCIA) produces Critical Infrastructure Security and Resilience Notes in response to changes in the infrastructure community’s risk environment from terrorist activities, natural hazards, and other events. This product summarizes the findings related to dams identified in the National Risk Estimate on Aging and Failing Critical Infrastructure Systems, released by OCIA in December 2014. This note supports DHS leadership; other federal, state, and local agencies; and private sector decision makers.

States, localities, and private entities own 82 percent of all high hazard potential dams. The Federal Government owns 4 percent and public utilities own 2 percent of the dams listed on the U.S. National Inventory of Dams.

States have inspection and regulatory authority over most dams. However, the Dam Safety Act expired in 2011, limiting federal funds available to support state dam safety programs.

Overtopping caused by flooding and high-water events accounts for 34 percent of dam failures in the United States. Erosion caused by overtopping can compromise embankments and lead to failure. The risk of overtopping increases if the spillway design is inadequate, debris causes spillway blockage, or the dam crest settles.

Dams built near previously undetected seismic zones are more likely to fail if they were not designed to withstand earthquakes. In addition, dams built in areas now experiencing higher than normal amounts of precipitation are more likely to fail from overtopping. The intensity of heavy precipitation events has increased in the past 50 years, especially in the Northeast and Midwest, and the designs for dams in these regions may not be adequate for current weather patterns.