The following is the second in a series of reports on disinformation published by the Department of Homeland Security's Public-Private Analytic Exchange Program.  The first report in the series is also available: 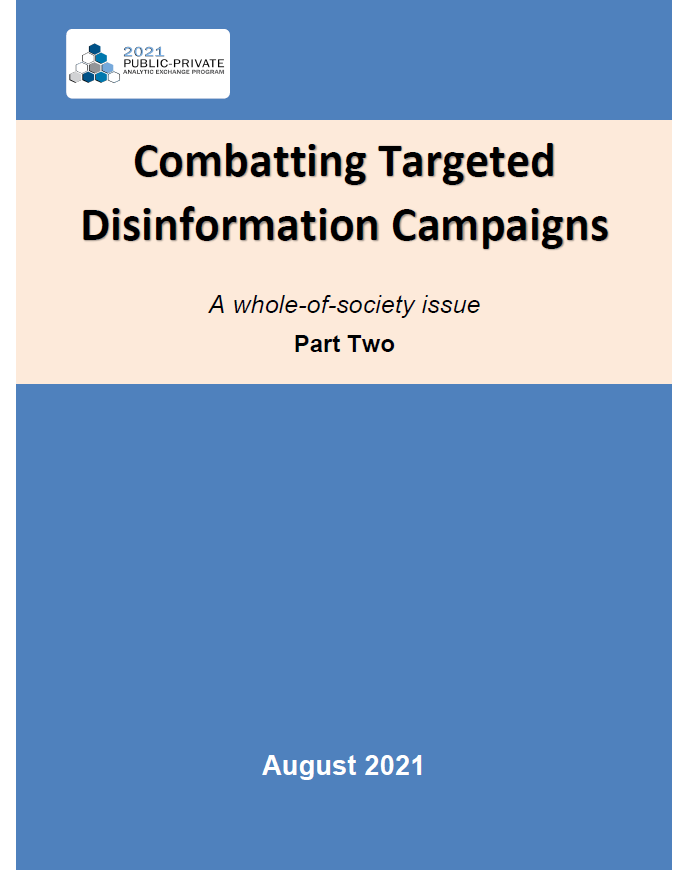 Recent events have demonstrated that targeted disinformation campaigns can have consequences that impact the lives and safety of information consumers. On social media platforms and in messaging apps, disinformation spread like a virus, infecting information consumers with contempt for democratic norms and intolerance of the views and actions of others. These events have highlighted the deep political and social divisions within the United States. Disinformation helped to ignite long-simmering anger, frustration, and resentment, resulting, at times, in acts of violence and other unlawful behavior.

All information consumers are vulnerable to being deceived by imposters, charlatans, hucksters, con men, and self-proclaimed experts. But ideological rigidity and intolerance of opposing views make information consumers especially vulnerable to such deception. In polarized environments, threat actors find ample opportunity to spread disinformation. Their voices are amplified by disgruntled audiences willing and sometimes eager to spread messages of discord.

In our second paper, we expand on two themes explored in the first paper: 1) how to stem the supply of disinformation; and 2) how to reduce the demand for disinformation. In this paper, we recommend approaches that impact both supply and demand.
None of these approaches are new; nor are they decisive by themselves. When combined and implemented consistently, the sum is greater than the parts.

Disinformation should not be viewed as a problem to be solved, but as a condition to be treated. There is no cure. However, preventative and alleviatory measures can be taken. 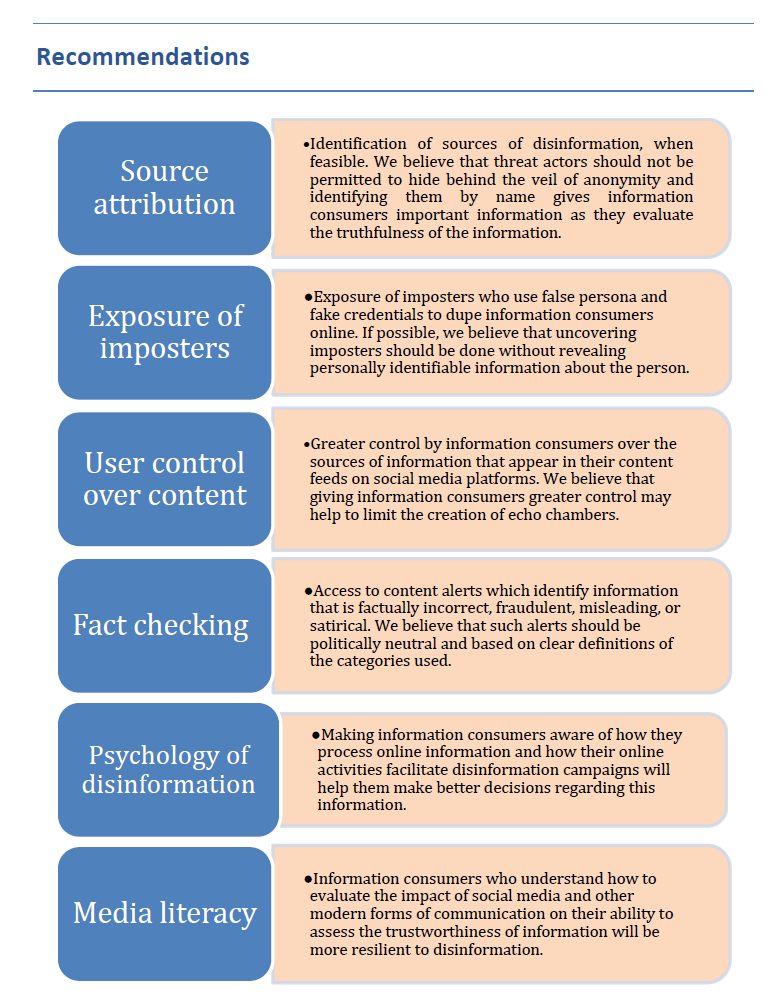 The report included the name, photo, and screenshots of posts on Facebook and Twitter of each individual. The New York Times later published a more detailed article on the person listed in the report as the greatest offender.

Whether the identification of domestic threat actors by private entities helps to stem the spread of disinformation is unclear. While naming and shaming may be superficially appealing as a method of exacting a price from those who peddle in disinformation, such naming and shaming might make matters worse by provoking a fierce backlash from those sympathetic to the views of the information consumers identified. In the end, this further entrenches both sides in their respective ideological positions. Since polarization is a primary reason for the success of disinformation campaigns, attempting to counter these campaigns with methods which may generate even more polarization seems questionable. Also, revealing the identities of domestic threat actors and other personally identifiable information can render these information consumers vulnerable to harassment or more egregious forms of retaliation. We do not condone harassment and vigilantism as means of responding to domestic threat actors.

It is extremely improbable that disinformation campaigns will disappear in the foreseeable future. Despite the increasing effectiveness of countermeasures, threat actors will always find avenues to spread their disinformation and will adopt new tactics as new forms of technology emerge. Compared to many legitimate forms of persuasion and influence, disinformation campaigns are inexpensive and frequently have few downsides for the threat actor. Threat actors take ready advantage of software and communication platforms that they did not develop and benefit from political and social conditions that they did not create.