The following preparedness guide was obtained from the official website of Senator Heidi Heitkamp of North Dakota, who has advocated on numerous occasions for improving national standards for the rail transport of crude oil.  Crude transport by rail has resulted in a number of recent accidents throughout the U.S. and Canada.  The document has since been removed from Heitkamp’s official site. 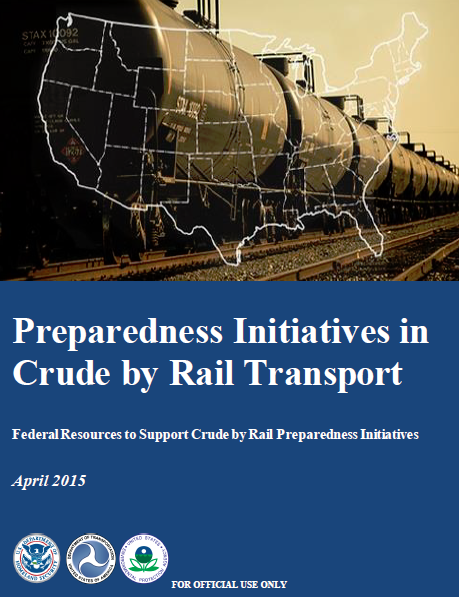 Domestic rail shipments of crude oil grew from 9,500 train car loads in 2008 to 435,560 loads in 2013—an increase of nearly 4,500 percent. The growth in shipment volume has increased the threat of spills, explosions, and other effects associated with a train derailment or crash. Recent incidents in Lac Mégantic, Quebec, Lynchburg, Virginia, Mount Carbon, West Virginia, and Galena, Illinois demonstrate the consequences of crude by rail incidents on surrounding communities and natural environments.

The Environmental Protection Agency (EPA), Federal Emergency Management Agency (FEMA), and Department of Transportation (DOT) (together, the interagency team) held discussions with states to collect information on existing preparedness efforts for responding to and mitigating the impacts of crude by rail incidents. The interagency team conducted conference calls with the 48 states in the lower continental United States and the District of Columbia. State participants included directors and deputies from state emergency management and homeland security agencies, environmental agencies, transportation agencies, state fusion centers, and local police and fire departments.

Four key observations emerged from the interagency team’s discussions with the states on crude by rail preparedness:

1. State Planning: States have taken steps to prepare for crude oil incidents, but do not consider the threat from crude oil to be more significant than other hazardous materials.

4. DOT Emergency Order: States believe the May 2014 DOT Emergency Order reporting threshold of one million gallons of Bakken crude oil per train is too high and does not help in their ability to identify and prepare at-risk communities.

Based on these coordination and outreach efforts with states, the interagency team has identified a range of Federal resources to help the whole community prepare for crude by rail transportation incidents.