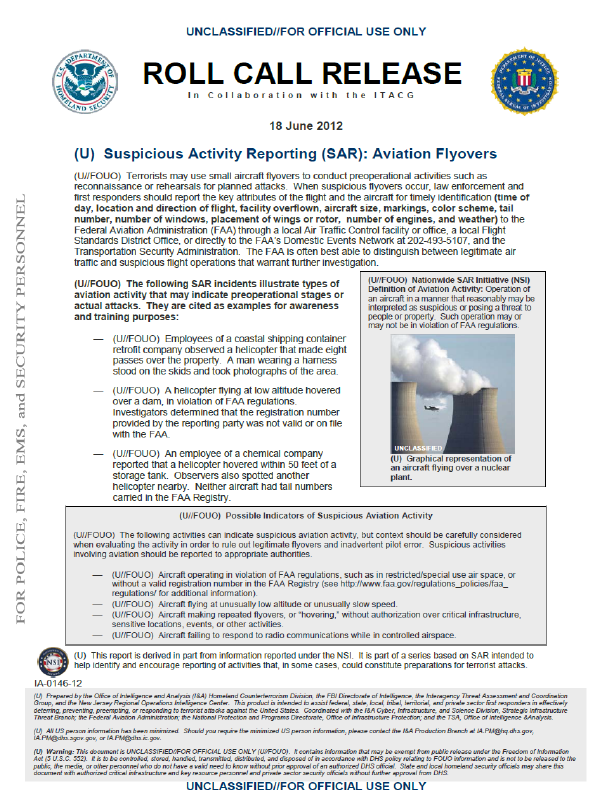 (U//FOUO) Terrorists may use small aircraft flyovers to conduct preoperational activities such as reconnaissance or rehearsals for planned attacks. When suspicious flyovers occur, law enforcement and first responders should report the key attributes of the flight and the aircraft for timely identification (time of day, location and direction of flight, facility overflown, aircraft size, markings, color scheme, tail number, number of windows, placement of wings or rotor, number of engines, and weather) to the Federal Aviation Administration (FAA) through a local Air Traffic Control facility or office, a local Flight Standards District Office, or directly to the FAA’s Domestic Events Network at 202 493 5107, and the Transportation Security Administration. The FAA is often best able to distinguish between legitimate air traffic and suspicious flight operations that warrant further investigation.

(U//FOUO) The following SAR incidents illustrate types of aviation activity that may indicate preoperational stages or actual attacks. They are cited as examples for awareness and training purposes.

— (U//FOUO) Employees of a coast shipping container retrofit company observed a helicopter that made eight passes over the property. A man wearing a harness stood on the skids and took photographs of the area.
— (U//FOUO) A helicopter, flying at low altitude hovered over a dam, in violation of FAA regulations. Investigators determined that the registration number provided by the reporting party was not valid or on file with the FAA.
— (U//FOUO) An employee of a chemical company reported that a helicopter hovered within 50 feet of a storage tank. Observers also spotted another helicopter nearby. Neither aircraft had tail numbers carried in the FAA Registry

(U//FOUO) The following activities can indicate suspicious aviation activity, but context should be carefully considered when evaluating the activity in order to rule out legitimate flyovers and inadvertent pilot error.  Suspicious activities involving aviation should be reported to appropriate authorities.