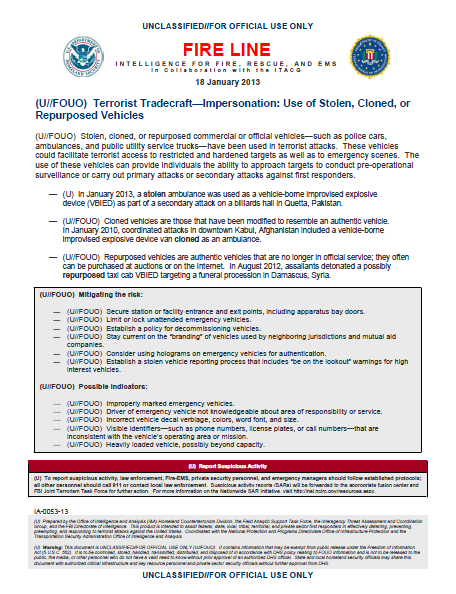 (U//FOUO) Stolen, cloned, or repurposed commercial or official vehicles—such as police cars, ambulances, and public utility service trucks—have been used in terrorist attacks. These vehicles could facilitate terrorist access to restricted and hardened targets as well as to emergency scenes. The use of these vehicles can provide individuals the ability to approach targets to conduct pre-operational surveillance or carry out primary attacks or secondary attacks against first responders.

— (U) In January 2013, a stolen ambulance was used as a vehicle-borne improvised explosive device (VBIED) as part of a secondary attack on a billiards hall in Quetta, Pakistan.
— (U//FOUO) Cloned vehicles are those that have been modified to resemble an authentic vehicle. In January 2010, coordinated attacks in downtown Kabul, Afghanistan included a vehicle-borne improvised explosive device van cloned as an ambulance.
— (U//FOUO) Repurposed vehicles are authentic vehicles that are no longer in official service; they often can be purchased at auctions or on the Internet. In August 2012, assailants detonated a possibly repurposed taxi cab VBIED targeting a funeral procession in Damascus, Syria.