The following bulletin was obtained from the website of the Downtown D.C. Business Improvement District. 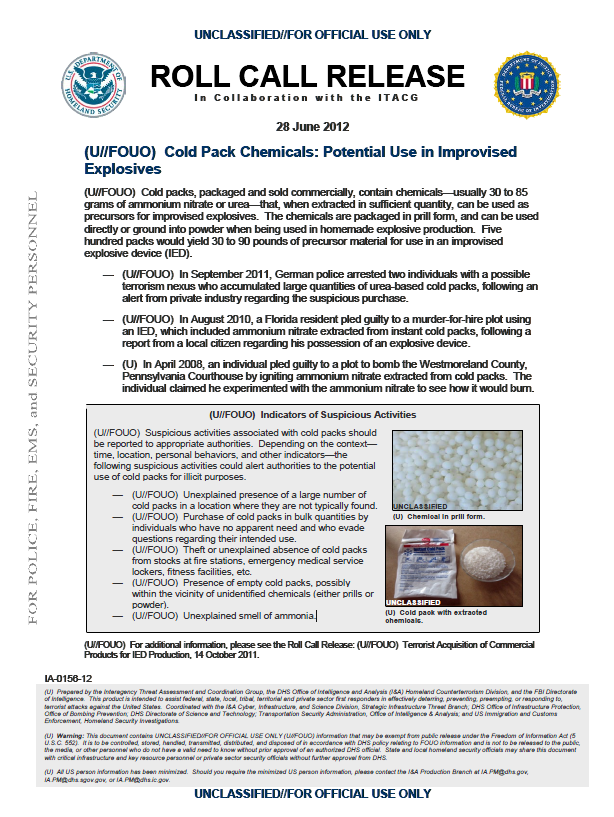 (U//FOUO) Cold packs, packaged and sold commercially, contain chemicals—usually 30 to 85 grams of ammonium nitrate or urea—that, when extracted in sufficient quantity, can be used as precursors for improvised explosives. The chemicals are packaged in prill form, and can be used directly or ground into powder when being used in homemade explosive production. Five hundred packs would yield 30 to 90 pounds of precursor material for use in an improvised explosive device (IED).

— (U//FOUO) In August 2010, a Florida resident pled guilty to a murder-for-hire plot using an IED, which included ammonium nitrate extracted from instant cold packs, following a report from a local citizen regarding his possession of an explosive device.

— (U) In April 2008, an individual pled guilty to a plot to bomb the Westmoreland County, Pennsylvania Courthouse by igniting ammonium nitrate extracted from cold packs. The individual claimed he experimented with the ammonium nitrate to see how it would burn.

— (U//FOUO) Unexplained presence of a large number of cold packs in a location where they are not typically found.

— (U//FOUO) Purchase of cold packs in bulk quantities by individuals who have no apparent need and who evade questions regarding their intended use.

— (U//FOUO) Presence of empty cold packs, possibly within the vicinity of unidentified chemicals (either prills or powder).