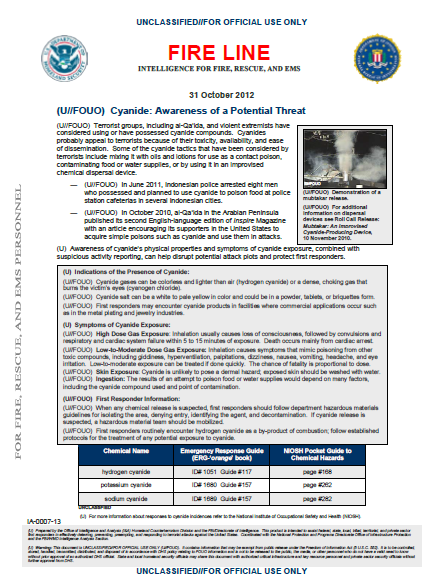 (U//FOUO) Terrorist groups, including al-Qa‘ida, and violent extremists have considered using or have possessed cyanide compounds. Cyanides probably appeal to terrorists because of their toxicity, availability, and ease of dissemination. Some of the cyanide tactics that have been considered by terrorists include mixing it with oils and lotions for use as a contact poison, contaminating food or water supplies, or by using it in an improvised chemical dispersal device.

— (U//FOUO) In June 2011, Indonesian police arrested eight men who possessed and planned to use cyanide to poison food at police station cafeterias in several Indonesian cities.

— (U//FOUO) In October 2010, al-Qa‘ida in the Arabian Peninsula published its second English-language edition of Inspire Magazine with an article encouraging its supporters in the United States to acquire simple poisons such as cyanide and use them in attacks.

(U) Indications of the Presence of Cyanide:

(U//FOUO) Cyanide gases can be colorless and lighter than air (hydrogen cyanide) or a dense, choking gas that burns the victim’s eyes (cyanogen chloride).
(U//FOUO) Cyanide salt can be a white to pale yellow in color and could be in a powder, tablets, or briquettes form.
(U//FOUO) First responders may encounter cyanide products in facilities where commercial applications occur such as in the metal plating and jewelry industries.

(U) Symptoms of Cyanide Exposure:

(U//FOUO) High Dose Gas Exposure: Inhalation usually causes loss of consciousness, followed by convulsions and respiratory and cardiac system failure within 5 to 15 minutes of exposure. Death occurs mainly from cardiac arrest.
(U//FOUO) Low-to-Moderate Dose Gas Exposure: Inhalation causes symptoms that mimic poisoning from other toxic compounds, including giddiness, hyperventilation, palpitations, dizziness, nausea, vomiting, headache, and eye irritation. Low-to-moderate exposure can be treated if done quickly. The chance of fatality is proportional to dose.
(U//FOUO) Skin Exposure: Cyanide is unlikely to pose a dermal hazard; exposed skin should be washed with water.
(U//FOUO) Ingestion: The results of an attempt to poison food or water supplies would depend on many factors, including the cyanide compound used and point of contamination.

(U//FOUO) When any chemical release is suspected, first responders should follow department hazardous materials guidelines for isolating the area, denying entry, identifying the agent, and decontamination. If cyanide release is suspected, a hazardous material team should be mobilized.
(U//FOUO) First responders routinely encounter hydrogen cyanide as a by-product of combustion; follow established protocols for the treatment of any potential exposure to cyanide.