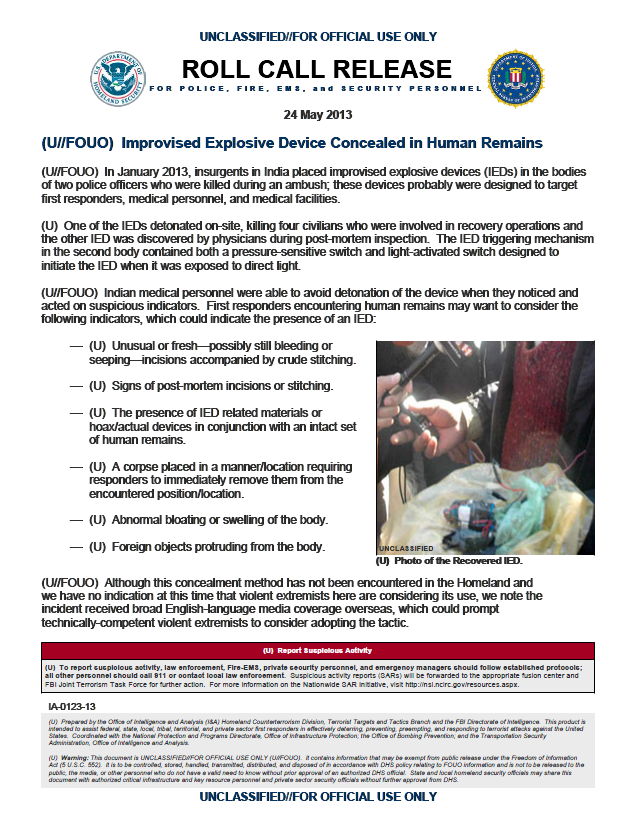 (U//FOUO) In January 2013, insurgents in India placed improvised explosive devices (IEDs) in the bodies of two police officers who were killed during an ambush; these devices probably were designed to target first responders, medical personnel, and medical facilities.

(U) One of the IEDs detonated on-site, killing four civilians who were involved in recovery operations and the other IED was discovered by physicians during post-mortem inspection. The IED triggering mechanism in the second body contained both a pressure-sensitive switch and light-activated switch designed to initiate the IED when it was exposed to direct light.

(U//FOUO) Indian medical personnel were able to avoid detonation of the device when they noticed and acted on suspicious indicators. First responders encountering human remains may want to consider the following indicators, which could indicate the presence of an IED:

— (U) Unusual or fresh—possibly still bleeding or seeping—incisions accompanied by crude stitching.
— (U) Signs of post-mortem incisions or stitching.
— (U) The presence of IED related materials or hoax/actual devices in conjunction with an intact set of human remains.
— (U) A corpse placed in a manner/location requiring responders to immediately remove them from the encountered position/location.
— (U) Abnormal bloating or swelling of the body.
— (U) Foreign objects protruding from the body.

(U//FOUO) Although this concealment method has not been encountered in the Homeland and we have no indication at this time that violent extremists here are considering its use, we note the incident received broad English-language media coverage overseas, which could prompt technically-competent violent extremists to consider adopting the tactic.